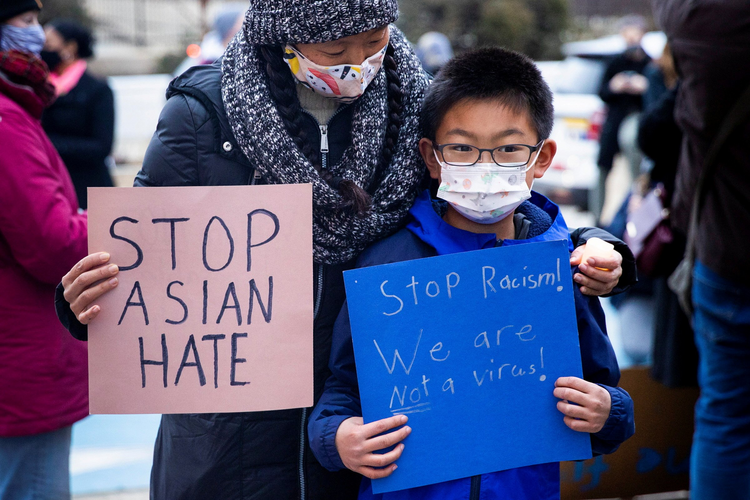 People in Philadelphia attend a vigil in solidarity with the Asian American community on March 17, 2021, after increased attacks on the community since the onset of the coronavirus pandemic. Robert Aaron Long of Woodstock, Ga., was charged that same day with killing eight people at three Atlanta-area spas March 16. Six of the eight were women of Asian descent, but Long told police racial bias was not his motive. (CNS photo/Rachel Wisniewski, Reuters

A day after a series of shootings staggered the Atlanta community, the city’s Archbishop Gregory J. Hartmayer, O.F.M. Conv., called on Catholics to “reach out to your neighbors in love and protection.” Eight people were killed in three shootings that targeted people in and near Atlanta-area massage parlors. The slayings represent the worst mass killing event in the United States in almost two years.

“When an attack of this kind happens, we have to be aware of the possibility that it could, tragically, lead to more violence,” Archbishop Hartmayer said in a statement released on March 17. “We don’t know the circumstances of this case, and that work is better left to civil authorities, but we do know members of the Asian community have found themselves the object of hateful speech and actions in the past year.”

He added: “We have brothers and sisters in Christ who endure discrimination, aggression and violence every day of their lives. Tonight, many of them may wonder if they will be safe—my heart aches just to think of it.

Archbishop Gregory J. Hartmayer, O.F.M. Conv.: “We must, as a Christian family of faith, speak up against any aggression and we must be active in our pursuit to end racism and discrimination of every kind.”

“We must, as a Christian family of faith,” he said, “work to protect the whole community. We must speak up against any aggression and we must be active in our pursuit to end racism and discrimination of every kind.”

Though police have so far declined to describe the shootings as hate crimes, six of the victims were Asian women. Instead, provoking the fury of many, one police official spoke of the shootings as a result of a “bad day” for the suspect.

Asian-Americans and Pacific Islanders turned to social media to air their anger, sadness, fear and hopelessness. The hashtag #StopAsianHate was a top trending topic on Twitter hours after the shootings occurred Tuesday evening.

“I think the reason why people are feeling so hopeless is because Asian-Americans have been ringing the bell on this issue for so long.... We’ve been raising the red flag,” said Aisha Yaqoob Mahmood, the executive director of the Atlanta-based Asian American Advocacy Fund, which does political and advocacy work across Georgia.

The shootings appear to be at the “intersection of gender-based violence, misogyny and xenophobia,” said State Rep. Bee Nguyen, the first Vietnamese-American to serve in the Georgia House and a frequent advocate for women and communities of color.

Pax Christi USA: “Charleston. Pittsburgh. Atlanta. Once more we have seen what appears to be the devastating result of racial hatred and our nation’s inability to address gun violence.”

The Atlanta homicides follow high-profile instances of race and gender-based killings in recent years by white men. In 2014, a 22-year-old who had railed against women online killed six people and wounded 14 near the University of California, Santa Barbara. The following year, eight Black church members and their pastor were shot and killed in a racist attack in South Carolina. In 2018, a Florida gunman with what police called a “hatred toward women” killed two and injured five at a yoga studio.

In an attack that year motivated by anti-Semitism, 11 people were killed while attending the Tree of Life Synagogue in Pittsburgh. The year after that, a shooter targeting Latinos opened fire at a Walmart supermarket in El Paso, Tex., killing 22 people.

“This is a thread that is woven through the histories of these gunmen. Toxic masculinity is truly a problem in this country,” said Shannon Watts, the founder of the gun-control group Moms Demand Action.

In a statement released on March 18, Pax Christi USA addressed the possible connection of the Atlanta shootings to political rhetoric that has made Asian-Americans more likely targets for hate crimes, as well as lax gun laws that once again helped propel a shooting massacre in the United States. According to police, Mr. Long had legally purchased the weapon he used to murder eight people the same day as the attacks.

“Charleston. Pittsburgh. Atlanta,” the Pax Christi USA statement begins. “Once more we have seen what appears to be the devastating result of racial hatred and our nation’s inability to address gun violence.” The group pointed out that the attacks in Atlanta represented the third mass shooting event so far this year in the United States and the 244th mass shooting since January 2009. “And yet the carnage has yielded little to no movement from our elected leaders on sensible policies that the vast majority of people support to curtail the suffering that gun violence wreaks on families and communities with alarming frequency.”

Many groups have grown weary of “thoughts and prayers”-style expressions of regret following shootings or racist attacks and are demanding more from U.S. political leaders.

According to Pax Christi, a rise in violence against Asian-Americans has been reported during a year of pandemic lockdowns and restrictions that some leaders “have not only politicized for their own agendas but racialized as well. It is in that context that we see clearly where fanning the flames of racism leads.”

Former President Donald Trump has been widely criticized by human rights and public health officials for repeatedly emphasizing the presumed origin of the coronavirus in Wuhan, China, and suggesting that its global spread was somehow deliberately orchestrated by the Chinese government.

For months Asian-Americans have wondered how to deal with a recent wave of assaults—many against the elderly—that have tracked the pandemic. Numerous Asian-American organizations say Mr. Trump’s rhetoric has emboldened people to express anti-Asian or anti-immigrant views. Nearly 3,800 incidents have been reported to Stop AAPI Hate, a California-based reporting center for Asian-American Pacific Islanders, and its partner groups, since March 2020. Nationally, women reported hate crimes 2.3 times more often than men.

A recent report from the Anti-Defamation League detailed a surge in white supremacist propaganda in 2020, with a significant amount devoted to anti-immigrant rhetoric.

The anti-hate group said 10 percent of propaganda descriptions in its inventory contained negative references to immigration, multiculturalism or diversity. There were also seven propaganda incidents with direct anti-China references to Covid-19.

In a statement released on March 18, Cardinal Blase J. Cupich, archbishop of Chicago, told members of the nation’s Asian-American community, “please know the Archdiocese of Chicago and the whole church stand with you in this moment of grief and horror.”

Cardinal Cupich: “It is incumbent on all of us to resist language, culture and acts that denigrate Asian Americans and all people of color—because they have deadly consequences.”

Deploring a year-over-year increase of 150 percent in reported hate crimes against Asian-Americans as “intolerable,” the cardinal said: “We pray for all who suffer racist violence and hate speech. There can be no place for either in our society, and it is incumbent on all of us to resist language, culture and acts that denigrate Asian Americans and all people of color—because they have deadly consequences.”

He added, “We must be ever vigilant against words that inspire acts of hate—this responsibility is even greater for elected officials.”

Many groups have grown weary of “thoughts and prayers”-style expressions of regret following shootings or racist attacks and are demanding more from U.S. political leaders. “Too many statements today will note how ‘we are stunned and heartbroken’ and yet not lead to any significant change in our laws,” Pax Christi USA charged. “Too many leaders will offer their ‘thoughts and prayers’ while tomorrow resisting any action that would mitigate the next round of offering ‘thoughts and prayers.’”

In a statement demanding “immediate comprehensive gun violence legislation and an end to misogyny and white supremacy,” the Franciscan Action Network pointed out that “amidst an epidemic of violence against all women, women of color are three times more likely to be murdered with a gun.” The Atlanta attacks, according to the network, “follow a long history of violence against Asian-Americans, largely fueled by negative stereotypes and xenophobia exacerbated at the start of the pandemic with elected officials referring to the novel coronavirus as the ‘China Virus’ or the ‘Wuhan Flu.’

“Hate and fear of the ‘other’ are deadly when paired with easy access to guns,” the group concludes, calling for support of the Bipartisan Background Checks and the Violence Against Women acts.