When the Irish fought for Mexico against America: the little-known legend of the ‘San Patricios’ 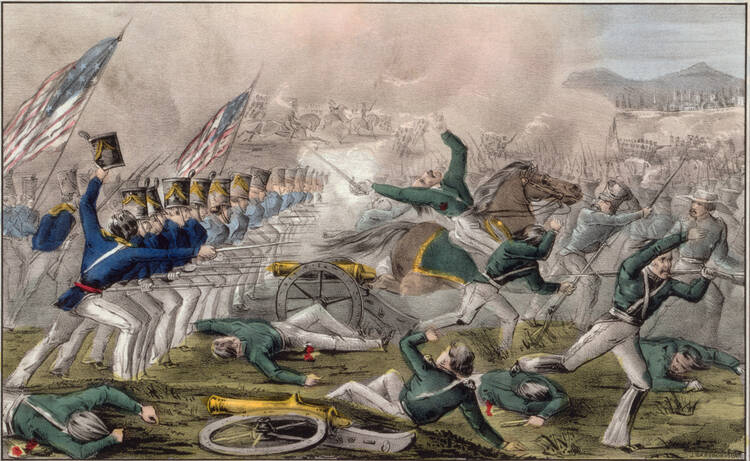 "Battle of Churubusco—Fought near the city of Mexico 20th of August 1847," by John Cameron (Library of Congress)

St. Patrick’s Day, long an occasion for U.S. residents of all ethnic extractions to eat corned beef and cabbage, drink green beer and, above all behave in ways otherwise considered beyond the pale, has been an occasion of pride for Irish-Americans since the 1700s. Less a recognition of Irish culture anymore, it is a celebration of Irish-American prosperity and cultural acceptance in the United States.

The residents of Ireland are largely baffled by it. They are puzzled first by the corned beef, because cabbage goes with bacon, and no one in Ireland knows what corned beef is. And it wasn’t until the 1990s that Irish municipalities figured out that overseas tourists were delighted by that “sure and begorrah” schtick and started sponsoring parades and festivals for what had long been a religious holiday as much as a civic one (It remains a national holiday in Ireland, a tradition observed here at America Media.) Many an Irish expatriate in the United States is appalled that our most famous manifestation of Fenian culture is a day marked by 20-somethings vomiting in gutters and by emergency rooms overflowing with cases of alcohol poisoning. A fitting tribute to the land of saints and scholars, no?

But there is also a bit of craic not often told on this side of the pond that might confound the proud Irish-American today: the story of El Batallón de los San Patricios, the “Saint Patrick Battalion,” two companies of Irish soldiers that fought for Mexico in the Mexican-American War. Their Mexican comrades called them San Patricios after their patron saint, or sometimes los colorados for their red hair and ruddy complexions (or, who are we kidding, sunburns). They were also noted for their enthusiasm for strong drink, with one historian recording that “they distill a strong intoxicating spirituous liquor from pulque, which they call mexcal. It has a sort of smoky taste, resembling Irish poteen.”

A bit of craic not often told on this side of the pond might confound the proud Irish-American today: the story of El Batallón de los San Patricios.

Yes, you read that right. From 1846 to 1848, in the worst years of the potato famine in Ireland and during mass emigration to the United States, one of the toughest units of the Mexican armed forces battling the invaders from El Norte was led by a man named John Patrick “Jack” Riley. He and his devoted band of Irish expatriates and other fellow travelers had varied backgrounds: Some were immigrants to Mexico; some were deserters from the U.S. Army; some were escaped slaves from the American South; some came for the chance to fight on the side of a Catholic underdog against a meddling anti-Catholic hegemon, an enemy the Irish knew a thing or two about. The Irish also had a long tradition dating back to the 17th century of “wild geese,” Irishmen who fought in European and South American wars.

Riley, known to his fellow soldiers as “Juan Reley,” was an artillery officer in the U.S. Army who deserted along with a number of other U.S. soldiers at Matamoros, Mexico, in 1846, shortly before the war began. He then fought on the Mexican side in the battle of Matamoros. The U.S. forces had a significant advantage in artillery, especially horse-drawn heavy cannons, and Riley and his fellow San Patricios served largely as a counterbattery to U.S. artillery forces in that battle and those to come.

A huge battle at Monterrey soon followed. While the U.S. forces triumphed, the San Patricios comported themselves well in battle, fending off several U.S. assaults. Their numbers swelled after the fight with more U.S. deserters. The battalion regrouped at San Luis Potosi, where a convent of nuns sewed them a green silk flag to serve as a banner. “It was that glorious emblem of native rights,” wrote Jack Riley, “that being the banner which should have floated over our native soil many years ago, it was St. Patrick, the Harp of Erin, the shamrock upon a green field.”

The Americans, one reporter wrote, “after the manner of savages as practiced in the days of Homer, have hanged these men as a holocaust.”

A short time later they fought in the blood-soaked battle of Angostura, inflicting heavy damage on U.S. artillery forces but losing almost a third of their battalion to death or injury. They were eventually reorganized as the “Foreign Legion of Patricios,” with Riley in command of one company and a man with a name no novelist could conjure in charge of the other: Santiago O’Leary.

The end of the San Patricios came at the battle of Churubusco, a vicious fight that signaled the end of the war and ended only after hand-to-hand combat inside the walls of a Catholic convent. Ulysses Grant, an American general in the fight who later commanded Union forces in the Civil War and then served as U.S. president, said it was the most hard-fought battle of the entire war. More than half the San Patricios were killed, in part because they refused to surrender. Riley was wounded and captured. Because the U.S. forces believed that the San Patricios had deliberately targeted officers with their artillery fire, vengeance came swiftly and with brutal efficiency. Fifty captured San Patricios were executed for treason, the largest (recorded) mass execution in U.S. history. Because Riley had deserted prior to the onset of hostilities, he escaped the hangman’s noose—but was branded on his cheek with a large “D” for “‘deserter.”

The U.S. government denied the existence of the San Patricios for more than 60 years.

Mexican papers reported the stunned reaction of locals to the cruelty inflicted on the captured soldiers. The Americans, one reporter wrote, “after the manner of savages as practiced in the days of Homer, have hanged these men as a holocaust.” The U.S. government denied the existence of the San Patricios for more than 60 years, in large part to cover up the high rate of desertions during the Mexican-American War. Many U.S. citizens criticized the war as a brazen land-grab. “I do not think there was ever a more wicked war than that waged by the United States on Mexico,” Ulysses Grant wrote decades later. “I thought so at the time, yet I lacked the moral courage to resign.” On his deathbed in 1885, he described the war as “one of the most unjust ever waged by a stronger against a weaker nation.”

The San Patricios are still honored in Mexico, including in processions held yearly on Sept. 12 (the anniversary of the mass executions) and on March 17. If you want to watch a tribute to them (complete with bagpipes), click here. A song in their honor by the Chieftains (with narration by Liam Neeson) can be found here. A movie about the San Patricios is available on Amazon Prime. Travelers to Ireland can visit a statue dedicated to the San Patricios in Clifden, County Galway, where John Riley, known there as Seán Ó Raghailligh, was born and raised. Mexico City also features a monument to the San Patricios.

What possessed the San Patricios to fight in such a doomed cause? Perhaps William Butler Yeats expressed it best, half a century later:

Out of Ireland have we come.
Great hatred, little room,
Maimed us at the start.
I carry from my mother's womb
A fanatic heart.