Xavier Becerra, Biden’s HHS pick, is ‘an enemy of the health of women and the unborn,’ pro-life leaders say 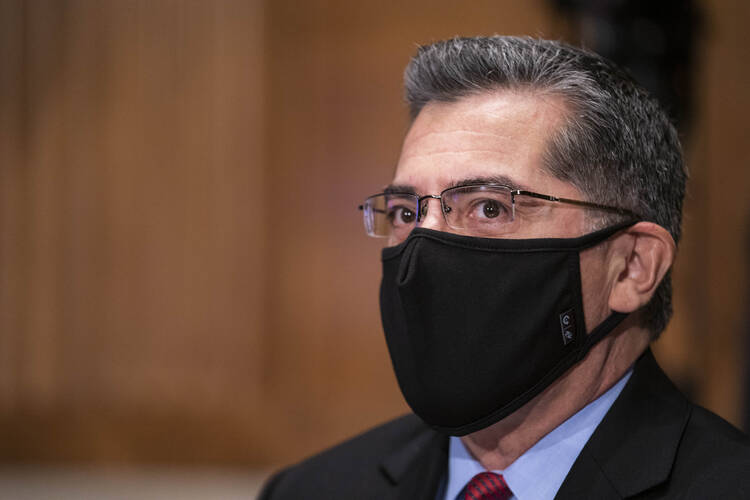 Xavier Becerra listens during a confirmation hearing to be Secretary of Health and Human Services before the Senate Health, Education, Labor and Pensions Committee, Tuesday, Feb. 23, 2021 on Capitol Hill in Washington. (Sarah Silbiger/Pool via AP)

There is no ambiguity about Xavier Becerra’s record on abortion. President Joe Biden’s nominee for secretary of Health and Human Services, currently the state attorney general of California, has consistently advocated for abortion rights throughout his career.

“Mr. Becerra is an enemy to every pro-life policy and law and has demonstrated complete disregard for the religious and moral convictions of those opposed to the brutal act of abortion,” according to a letter signed by pro-life leaders objecting to Mr. Becerra’s confirmation. The letter, dated Feb. 18, was signed by 60 pro-life advocates, including leaders from the Susan B. Anthony List, the March for Life, Students for Life Action, the Family Research Council, National Right to Life, Live Action, the Dr. James Dobson Family Institute and the Center for Medical Progress.

Mr. Becerra, who is Catholic and served 24 years in the U.S. House as a representative from Los Angeles, voted against the Hyde Amendment in 1993, which prevents federal tax dollars from being used for abortions. Mr. Becerra voted against the Partial-Birth Abortion Ban Act in 2003 and against the Born-Alive Abortion Survivors Protection Act. In 2013 and 2015, he voted against measures that would ban abortion five months into pregnancies.

President Joe Biden’s nominee for secretary of Health and Human Services has consistently advocated for abortion rights throughout his career.

“We understand that the president needs to assemble a Cabinet; however, Mr. Becerra has proven himself to be an enemy of the health of women and the unborn. He cannot be entrusted with our national health programs and policies and is not qualified to serve as secretary of Health and Human Services,” the letter writers said.

Despite his critics, Mr. Becerra is expected to be confirmed by the Senate. In the first of two confirmation hearings, Mr. Becerra said his first priority will be to address the Covid-19 pandemic. “To meet this moment, we need strong federal leadership,” he said, according to the Associated Press. “I understand the enormous challenges before us and our solemn responsibility to faithfully steward this agency that touches almost every aspect of our lives.”

Sister Carol Keehan, the Daughter of Charity who led the Catholic Health Association for 14 years, said she was “relieved and thrilled” at Mr. Becerra’s nomination. She called him “a leader whose character is rooted in his Catholic upbringing and values,” adding, “I know he is the right person to lead the agency in this moment.”

“Becerra has long said he is driven by the belief that everyone who works hard in our country deserves an opportunity to get ahead, including being able to send their children to college and to retire with dignity,” Sister Keehan said. “That is both a Catholic value and an American value; protecting that value starts with protecting our loved ones’ health.”

Sister Carol Keehan, the Daughter of Charity who led the Catholic Health Association for 14 years, said she was “relieved and thrilled” at Mr. Becerra’s nomination.

Yet Mr. Becerra has often been at odds with Catholic leaders. Since 2014, church leaders fought against a California directive that mandated coverage of abortion in state health care plans, including for the Missionary Guadalupanas of the Holy Spirit, according to Ned Dolejsi, the interim executive director of the California Catholic Conference. Mr. Becerra supported the mandate when he became attorney general in 2017.

Yet this mandate violated the federal Weldon Amendment, which dictates that states receiving federal funds cannot discriminate against health plans that do not cover abortions, Mr. Dolejsi said in an email to America. In December, under the Trump administration, the H.H.S. Office for Civil Rights said it was taking corrective action against the state of California.

“As a potential new head of H.H.S., Mr. Becerra would be in a position to recognize the appropriateness and equity of this ruling and not require everyone who does not support abortion to purchase a health plan for their employees to include abortion,” Mr. Dolejsi said. “We would hope that, if he does become the new head of H.H.S., that he would act respectfully and not ideologically or partisan in application of federal law on the controversial issue of abortion.”

“We would hope that, if he does become the new head of H.H.S., that he would act respectfully and not ideologically or partisan in application of federal law on the controversial issue of abortion.”

“On religious protections, the protection for religion is for the individual,” he said. “I think it is important to distinguish between protections that you are affording to the individual to exercise his or her religion freely, versus protections you are giving to some institution or entity who is essentially bootstrapping the First Amendment protections on behalf of somebody else.”

In California, Mr. Becerra supported measures to force pro-life pregnancy clinics to provide information about abortion to their clients. He also sued the Little Sisters of the Poor to end their religious exemption from the H.H.S. contraceptive and abortifacient mandate. Some have criticized the attorney general’s efforts to restrict public worship during the Covid-19 pandemic.

“Mr. Becerra has consistently used the power of his office to attack people who think differently than him and to advance the interests of the abortion lobby when he had the authority to do so,” according to a December letter to Senate leaders, organized by the Students for Life of America. “We the undersigned have grave concerns about how he would use the power of the nation’s healthcare systems to advance his preference for abortion and express his disregard for people of faith by forcing support, payment, and compliance with policies that he prefers.”

“Mr. Becerra has consistently used the power of his office to attack people who think differently than him and to advance the interests of the abortion lobby when he had the authority to do so.”

During his time as attorney general, the state of California filed 110 lawsuits against the Trump administration, including measures that cracked down on immigration and planned to roll back efforts to address climate change.

After retiring from the House, Mr. Becerra said his family’s immigrant background has a profound influence on his work in government.

“My parents inform everything I do in Congress, whether it’s because of their immigrant background or just their hardworking nature or the fact that education was not open to them, so it stopped them from doing things,” Mr. Becerra said, according to The Los Angeles Times.

Mr. Becerra is a native of Sacramento and the first member of his family to attend college. After studying economics, he went on to study law at Stanford. There he met his wife, Dr. Carolina Reyes. After Stanford, the couple moved to Massachusetts, where Dr. Reyes went on to medical school at Harvard.

The U.S. Conference of Catholic Bishops declined to comment on Mr. Becerra’s nomination.