Before Rush Limbaugh, Father Coughlin was America’s first demagogue of the airwaves 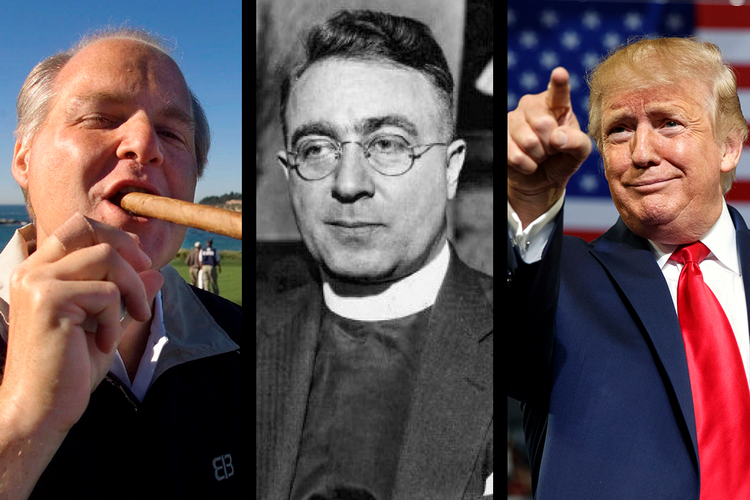 Obituaries for radio personality Rush Limbaugh, who died on Wednesday after a lengthy battle with lung cancer, largely agreed that Limbaugh was a pioneer in the use of radio for a kind of political rhetoric that straddled the line between entertainment and deliberate incitement of hatred. His 32 years as host of “The Rush Limbaugh Show,” a radio program that was nationally syndicated and followed by millions, “transfigured him into a partisan force and polarizing figure in American politics. In many ways, his radio show was like the big bang of the conservative media universe,” Oliver Darcy wrote for CNN. Limbaugh “often waded into conspiratorial waters and generated controversy for hateful commentary on gender and race,” he added. “During the course of his career, Limbaugh started a number of fires with his commentary.”

Limbaugh was followed by others in radio and television and online who became his peers in partisan shock-jock “infotainment.” But it is a mistake to consider him the originator of the genre or style. He had his forebears, too, first among them the notorious “radio priest” of the 1930s and 1940s, the Rev. Charles E. Coughlin.

To read Father Coughlin’s articles and the transcripts of his radio broadcasts is to find tropes that have become all too familiar in recent years: a not-always-subtle anti-Semitism; a nativism combined with alarm in response to foreign invaders; open praise for dictators; “both-sides” arguments designed to excuse the policies of genocidal strongmen; the rhetoric of victimization served up to an audience of millions of whites; dog-whistles encouraging sedition and vigilantism; identification of Christianity as the true American religion; and, of course, histrionic claims of censorship when entities, both public and private, cut off his access to his public.

To read Father Coughlin’s articles and the transcripts of his radio broadcasts is to find tropes that have become all too familiar in recent years.

That last claim was often supported by the editors of America in the 1930s, part of an ongoing repartee between the magazine’s editors and the demagogic priest that warmed and cooled over many years, with Father Coughlin’s increasingly rabid anti-Semitism bringing virtually any mention of him in America to an end by the close of the Second World War. America’s editors also largely agreed with Father Coughlin’s position on the persecution of Catholics in Mexico by the regime in power, as well as his fervent anti-Communist stance (one matched by the editor in chief of America at the time, Wilfrid Parsons, S.J.).

Father Coughlin seemed at first to be on the path later taken by Bishop Fulton Sheen, a popular voice whose real appeal was to the religious sensibilities of his readers and listeners—both Catholic and not. According to Wallace Stegner, Father Coughlin had a “voice of such mellow richness, such manly, heart-warming confidential intimacy, such emotional and ingratiating charm, that anyone tuning past it almost automatically returned to hear it again.”

His original radio program “The Golden Hour of the Little Flower” and his best-selling newspaper Social Justice both had their roots in Catholic apologetics and devotional materials.

John LaFarge, S.J., later the editor in chief of America, wrote that Coughlin’s radio show “combined as did probably no Catholic program before or since the moving ingredients of sugary Eucharistic devotion, emotionally appealing sacred music, melodious oratory and a deep, passionate appeal to the inmost resentments of his forty million listeners in the United States and Canada, non-Catholic and Catholic alike.”

Forty million listeners would have been a third of the nation’s population in the mid-1930s, but that figure might also have been an understatement: His 1979 obituary in The New York Times claimed that at the height of his popularity, Father Coughlin was drawing a weekly audience of 90 million listeners. (O.K., that’s clearly an overstatement.) But there is no question he had a strong cult of personality surrounding him, as well as a huge and devoted following that included millions of Depression-era unemployed workers who saw him as the champion of the working man. It was a meteoric rise to fame for a man who only 10 years before had been appointed the pastor of a Michigan parish that served two dozen families.

His original radio program “The Golden Hour of the Little Flower” and his best-selling newspaper Social Justice both had their roots in Catholic apologetics and devotional materials.

Father Coughlin’s early departures from questions of religion usually involved broadsides against President Franklin D. Roosevelt, his longtime bête noire, or lengthy criticisms of the government’s monetary policy, U.S. organized labor and enemies (real and imagined) of the Catholic Church and the United States. His economic and political views led to more than one heated back-and-forth with Father Parsons, the editor in chief of America from 1926 to 1936.

By the mid-1930s, however, he was becoming increasingly political, most clearly in his relentless attacks of President Roosevelt. He courted Benito Mussolini and suggested the two collaborate on questions of state economics; he praised Adolf Hitler’s leadership; he began turning more and more to tired canards about Jewish opposition to Christians in America and abroad—including Germany. He also began to engage in wild conspiracy theories and delusions of grandeur. U.S. General Smedley Butler even told J. Edgar Hoover, the director of the Federal Bureau of Investigation, that Father Coughlin had tried to recruit him for a venture in which Father Coughlin would raise a huge Catholic army and march south to conquer Mexico (deposing Roosevelt along the way).

The problem with treating our politicians like messiahs
Matt Malone, S.J.

His enormous audience meant he could sway the tone of national conversations; some commentators have suggested Father Coughlin was the second most powerful person in the country after Roosevelt himself. The subtle anti-Semitism of his earlier years began to take on a more strident tone in the late 1930s as World War II loomed and his own popularity began to fall: In the pages of Social Justice, he accused Jewish greeting-card manufacturers in the United States of (you knew this was coming, didn’t you?) “taking Christ out of Christmas.”

His fall from grace began in the days following Kristallnacht, the well-coordinated attacks on Jewish homes, schools, synagogues and businesses across Germany in November 1938. Those committing the violence went unmolested, while over 30,000 Jewish men were rounded up and eventually sent to Nazi concentration camps. Father Coughlin explained the incident away by noting that Nazism formed as a defense against international Communism, itself a Jewish plot—and so it made sense that Germans would defend themselves against those scheming to destroy their civilization.

Almost the entire Politburo of the Soviet Union was made up of atheist Jews, he claimed. And even if it were true that Germany was persecuting Jews, it was nothing compared to the persecution suffered by Christians in Mexico, in Spain, in the Soviet Union itself. Because U.S. newspapers and radio stations were controlled by “Jewish gentlemen,” he said, the persecution of Christians would never be fully recognized.

“I could have bucked the government and won,” he said. “The people would have supported me.”

After the German invasion of Poland in 1939, Father Coughlin tried to organize an “army of peace” to march on Washington, D.C., to urge the Roosevelt administration not to change U.S. neutrality laws. The “Friends of Democracy of New York,” an anti-fascist group, accused Father Coughlin of “inciting the American people to riot and civil war” and denounced him as “an enemy of democracy, a disciple of fascism, an advocate of violence, and a purveyor of racial hatred.”

His anti-Semitic rhetoric became more and more charged. International Jewry, he claimed, was run by a secret government descended from the Sanhédrin, who had condemned Christ to death; Jews were in league with Masons and liberals to destroy Christian civilization. After the Japanese attack on Pearl Harbor, Father Coughlin argued that the entrance of the United States into World War II was part of a conspiracy between the British government, President Roosevelt and the Jewish people. Social Justice also published the notorious Protocols of the Elders of Zion, a thoroughly discredited text claiming to reveal a Jewish plot to take over the world.

Radio stations began dropping Father Coughlin’s broadcasts on their own as early as 1940. The U.S. Postal Service also stopped distributing Social Justice because it was “giving aid and comfort to the enemy.” Father Coughlin charged that his free speech was being restricted (an argument, again, supported by the editors of America at the time), but the clock was running out. In 1942, Archbishop Edward Mooney of Detroit ordered Father Coughlin to stop publishing Social Justice and to remain silent on public matters. Archbishop Mooney also told Father Coughlin he was in danger of being tried for sedition by the federal government for his attacks on Roosevelt—as well as, presumably, his plots to raise an army to attack Washington, D.C., and then Mexico.

Like Father Coughlin, they are aware that the easiest path to power is to wrap oneself up in an American flag...or hold up a Bible.

Father Coughlin accepted his archbishop’s order and returned to the life of a parish priest in Royal Oak, Mich. For the remainder of his life he remained largely out of the public eye, though he continued to write articles and pamphlets against Communism and against the reforms of the Second Vatican Council.

In a phone interview two years before his death, Father Coughlin saw himself not as a demagogue or a racist but as a great populist hero. “I could have bucked the government and won,” he said. “The people would have supported me.”

It all sounds eerily familiar, doesn’t it? But that familiarity comes not just from Rush Limbaugh’s use of similar tropes and tactics. Rather, it is because Father Coughlin represented just one of many demagogues in U.S. politics and culture who have been able to successfully pinpoint our greatest fears, our hidden prejudices and our deepest resentments and thus to sway huge numbers of the populace into embracing seemingly contradictory or openly un-American positions. Like Father Coughlin, they are aware that the easiest path to power is to wrap oneself up in an American flag...or hold up a Bible.