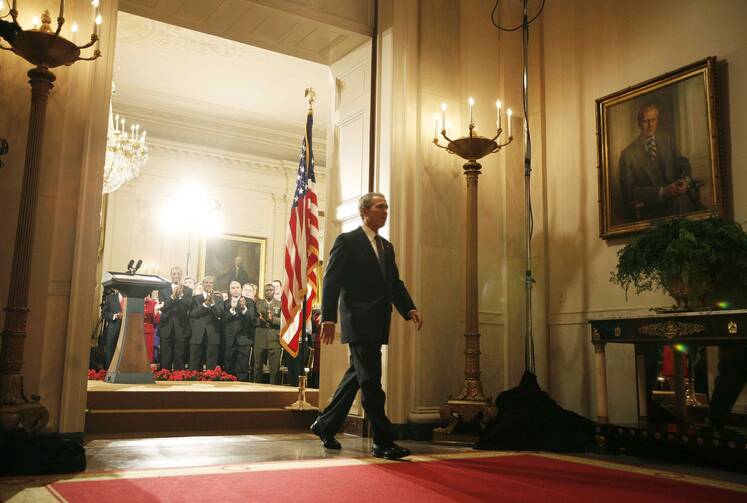 U.S. President George W. Bush walks from the East Room at the White House following his live television address to the nation Jan. 15. Earlier in the day, Bush proclaimed Jan. 18, 2009, the Sunday before the 36th anniversary of Roe v. Wade, as National Sanctity of Human Life Day. (CNS/Jason Reed, Reuters)

“Sometime around 1700,” the late Kenneth Minogue observed, “a lot of people, particularly the intelligentsia, abandoned the [traditional, Christian] belief that we live in a fallen world and adopted the idea that we live, not in a fallen world, but in an imperfect society.” This shift away from the metanarrative of creation, fall and redemption, said Professor Minogue, ushered in modern political thought and the political idealism that accompanies it. By idealism the professor did not mean starry-eyed optimism. In the sense in which Professor Minogue used the terms, political idealists believe that imperfections in society are for the most part explained by our participation, willingly or not, in one or more systems, and that the work of perfecting society is mainly about creating better systems. In the 19th and 20th centuries, political idealism gave rise to various ideological programs for a more “perfect” society—those famous “-isms” of both the left and the right.

A fallen world requires a divine redeemer. An imperfect society just needs a better plan and better people to execute it.

You see the problem: Either way, human beings need some kind of messiah. According to traditional Christian theology, the messiah is the only son of the living God. In an imperfect society, the messianic role is played by someone else—more often than not, the nation-state.

You’d be forgiven for thinking that all of that is just a lot of academic pablum, perfectly suited to a leisurely conversation in the faculty lounge, but not terribly helpful in the business of daily life. Except that this shift in worldview matters a great deal—for how we view the world fundamentally shapes what we expect from it, as well as how we understand the possibilities and limitations of what we can do in it.

A case in point: I watched recently a very fine documentary on PBS about the life of George W. Bush. The program left me with the sense that, in spite of some significant and tragic mistakes, Mr. Bush is a fundamentally decent human being. He is also a practicing Christian, and his faith has had a profound influence on his personal and professional choices. And yet, contra the hordes of folks who think his faith had too much influence on his decisions as president, I am left thinking that his faith did not have enough of an influence—that it failed him at some critical moments.

It is in vogue in certain quarters to say that Mr. Bush lied to the country in order to justify the invasion of Iraq in 2003. I am not sure about that. Mr. Bush certainly said things at the time that were untrue, but something that is untrue is not a lie if the speaker believes it. I think he believed what he was saying. The consequential untruth that he spoke, moreover, was not first said to us but to himself. And that offers an enduring lesson, for it seems that this was a place where Mr. Bush’s faith failed him. A person with a deeper understanding of what it means to live in the world described in the doctrine of original sin might have asked questions that Mr. Bush seemingly did not.

A person more deeply aware of the human proclivity to self-deception might have asked whether he was lying to himself. A person more deeply aware of the human tendency to act in one’s self interest might not have been so optimistic in predicting the outcome, might have asked whether the war would inevitably be seen by the various Iraqi factions simply as an opportunity to further their tribal aims. Such a person might have asked whether the American mission, often described in quasi-messianic terms, was to liberate and to govern, or rather to purify. Governing is messy but doable. Purifying is clear-cut but hard, which is why the former is a responsibility borne mainly by human beings, while the latter is mostly God’s job. Mr. Bush’s shortsighted decision to ban former Iraqi army officers from serving in the new Iraqi police force, for example, hugely destabilized the country. But making the decision to allow the officers to serve would have required a leader who understood himself to be acting in what is often a morally turbid world—a place that sometimes requires you to tolerate things like having former foes in positions of power.

Human beings do great and beautiful things everywhere and every day; but we are also sinners, and that fact can distort our perceptions. In 2003 the country needed a leader who was less of an idealist and more of a realist—a realism rooted in the realities to which the Christian faith testifies.

A version of a portion of this column appeared in the Sept. 4, 2017, issue of America.