Los Angeles is struggling with vaccine distribution equity. Can the Catholic Church help? 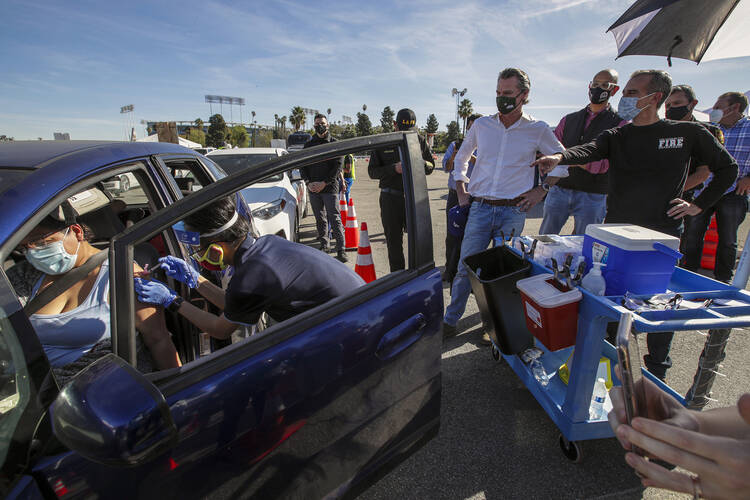 As California Gov. Gavin Newsom announced on Jan. 25 that the next tiers in the coronavirus vaccine distribution would no longer target essential workers or other at-risk groups, Los Angeles County reported that the death toll among Latinos—55 percent of whom work in front-line essential worker positions—has gone up 1,000 percent since November.

“While every single race and ethnicity group in L.A. County has seen a horrendous increase in mortality rates, the gap between the experiences of those in our Latinx community and all others is frankly horrifying,” said L.A. County Public Health Director Barbara Ferrer.

Age-based, “first come, first serve” strategies like the one California is turning to have the appeal of appearing impartial. No group gets “special treatment.” Everyone is the same.

And yet statistics like those confronting Los Angeles indicate that everyone is not the same. Throughout the United States, some communities are suffering and dying at rates far greater than others. They are often high-density neighborhoods where people of color live in overcrowded conditions with fewer health care or economic resources and where many are employed in front-line industries like food processing, preparation and delivery or in the retail sector.

Age-based strategies have the appeal of appearing impartial, but throughout the United States, some communities are suffering and dying at rates far greater than others.

Essential workers are “the voice of the canary in the coal mine,” said Brendan Busse, S.J., the associate pastor of Los Angeles’ Dolores Mission Church. “And yet it’s rare that they are the voice we’re listening to.”

“We’re listening to the miners running out of the mine, but the canary is dropping dead,” he said.

Plans aimed at equitable distribution of coronavirus vaccines might focus simply on prioritizing certain groups or neighborhoods, but experts say that ensuring means of access to the vaccine and responding to the specific issues and questions of different communities are just as important right now. Reverend Zachary Hoover, the executive director of the religious-based community organizing group LA Voice, said, “You won’t have outcomes that are equitable unless you allow for things like those who rely on public transportation, those who have less access to the internet, those who don’t have a health care provider.”

Vaccine distribution strategies, she argued, must consider everything from time of day—“some people will require evening and weekend hours to accommodate different work schedules and caregiving needs”—to offering a variety of different methods to sign up for and receive vaccines.

In Los Angeles one of the main sites for testing and vaccination is Dodgers Stadium. “That’s great if you have a car that can reliably idle for an hour and you’re not supposed to be at work,” said Father Busse. Otherwise, “you’re excluded.”

“You won’t have outcomes that are equitable unless you allow for things like those who rely on public transportation, those who have less access to the internet, those who don’t have a health care provider.”

Opening local, community-based vaccination sites is key, these experts say, adding that their value is at least as much about gaining trust as providing access. In one recent study K.F.F. found that a higher percentage of black and Hispanic adults are likely to “wait and see” before getting vaccinated.

That “vaccine hesitancy,” says LaShyra Nolen, a Los Angeles native and Harvard Medical School’s first black female student body president, is a direct result of those communities’ experiences of institutionalized racism. “A black person from Compton who has experienced personally how our system can forget about you and demean you is not going to be trusting so quickly,” she said. The capacity to trust that the system intends you no harm is its own kind of privilege, she noted.

According to Isaac Cuevas, the director of the Archdiocese of Los Angeles’ Office of Immigration and Public Affairs, those administering the vaccines should be familiar to and with the community they are serving. “Obviously, it just makes all the sense in the world that you should be able to communicate with the people [you’re vaccinating].”

This is not just a matter of language, he points out. “It’s about culture, offering messages that resonate.

“If you have a Filipino community [member] come to get vaccinated and they see a Filipino nurse, they will all line up for just that one nurse,” he said. “It’s someone they can understand.”

“Vaccine hesitancy” is a direct result of institutionalized racism. “A black person from Compton who has experienced personally how our system can forget about you and demean you is not going to be trusting so quickly.”

Local religious communities can have a major role in an equitable distribution system. “Even as there’s distrust of government systems by people who have been hurt by those systems,” said Mr. Hoover, “there’s actually eagerness among a lot of communities of color to get vaccinated. Faith and religious communities are critical to building understanding and trust.”

Some of that work may be as simple as having religious leaders publicly talking up the vaccine and getting their shots. Every year at Dolores Mission, Father Busse said, the community offers vaccinations after one Sunday Mass. “The nurse asks that the priest celebrating the Mass be the first one to get his shot visibly on the plaza,” he said. “It’s very important that the priest is seen getting this shot.”

Mr. Hoover sees even greater potential in the example of Los Angeles Archbishop José Gomez. “It would be amazing if he said something in a pastoral letter about the importance of the vaccine,” he said.

Mr. Cuevas said that the possible role of the archbishop and other religious leaders “has been a huge part of the conversation” between the archdiocese and the county about promoting vaccine compliance. “People are looking to him; they want to make sure that it’s effective,” he said. “And he cares just as much about [reaching] people that are not Catholic.”

Ms. Nolen believes religious groups also have an important role in overcoming theological resistance to the vaccine. “I’ve heard family and friends saying they don’t want to get the vaccine or they don’t trust the vaccine because they believe that God is going to work it out, that the vaccine is not ‘of God,’” she said. “The way I view it as a Christian woman is that God creates his children and gives them gifts and skills so they have tools to help…. If that message comes from a church, which is a trusted community member, it’ll help.”

Ms. Nolen thinks the impact could extend beyond communities of people of color too: “Everyone is talking about black people and Latinos, but a lot of Republicans are vaccine hesitant as well,” she said. According to K.F.F.’s most recent study, 33 percent of Republicans of all ethnic groups currently say they will not get vaccinated. That percentage has remained constant for some months at this point, while hesitancy has gone down among Democrats and independents.

“Even as there’s distrust of government systems, there’s eagerness among a lot of communities of color to get vaccinated. Faith and religious communities are critical to building understanding and trust.”

“Could there be religious reasons for that?” Ms. Nolen asked. “We haven’t really looked. There’s a lot of roles for folks in the church to be advocates for the power of science.”

Mr. Cuevas agreed that churches and other religious institutions, often deeply embedded in local communities, would seem natural physical locations for vaccination as well. But he notes some potential complications.

“It’s my understanding that if a person has their own insurance, testing has been billed through their provider,” he said. “But if they don’t have insurance, the location offering the testing has to cover the costs.” The same process may be true of the vaccine.

“I don’t know that [the archdiocese is] in the position to be able to cover those costs,” Mr. Cuevas said. “It’s a perfect partnership opportunity because people trust the church. But we also have to ensure everything’s covered on the back end.”

One other issue around in-community vaccination sites is the likelihood of the phenomenon of white locusting—that is, affluent white people from other parts of the city descending on vaccine centers intended to engage specific communities of color, a problem already showing up in other parts of the country.

“I’m thinking of people from Westwood coming into South Central to get vaccinated because the lines are too long in their community,” Ms. Nolen said. “The lines are so long there because in their community they don’t have to think about ‘Is this vaccine going to harm me? Does the government really care about my life?’ That breach of trust isn’t there.

What is needed right now is greater organization of vaccine distribution. “At airports, you don’t want the planes fighting over where each gets to land.”

“I want us to have as many clinics as we can across the state that everyone has access to,” she said, explaining that the sudden descent of dozens of white people onto these communities could discourage local engagement. “Black folks can’t even go to a Starbucks without getting accosted. They can’t take a run [into a white community]. Having these individuals come into your community, you naturally don’t feel safe.”

This concern, she added, should not be unfamiliar to those from more privileged communities. “If black folks were coming into Westwood to get vaccinated, people would be in an uproar: ‘What are they doing there? They’re taking our shots.’”

Covid has brought two parallel worlds to L.A.: one hopeful, one overwhelmed by suffering
Jim McDermott

The result, she fears, is that the local people specifically meant to be served by local centers will end up staying away. For many communities of color, Ms. Nolen explained, “If you don’t see anyone in line who looks like you, you’re not going to want to get this vaccine.”

What is needed right now is greater organization, said Father Busse. “At airports, you don’t want the planes fighting over where each gets to land. That’s what I think would help this situation: air traffic control.”

People pit efficiency and equity against each other, he said, but in truth the “mess” we find ourselves in “is a consequence of pretending our systems are efficient when they’re really not.”

Mr. Hoover sees this moment as a great opportunity for the county to grow closer to its ideals. “The question of this moment is whether we will use our leadership to create the county we want to live in, which is one where you don’t get sentenced to death earlier or more frequently because of your skin color or where you were born...[one] that can deliver resources and support in equitable ways.

“Because when that happens we’re all going to be much better off.”

This article has been updated to note that Reverend Zachary Hoover is an ordained minister.