The Editors: Joe Biden will need support from the U.S. bishops to reform immigration policy 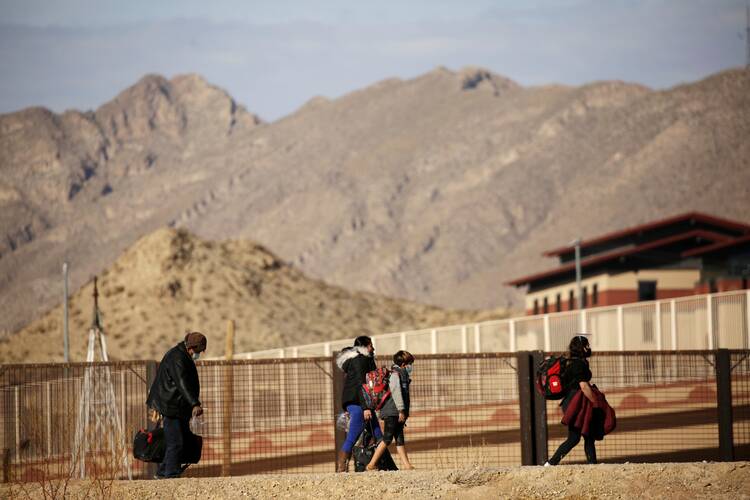 President Joseph R. Biden Jr. began his administration by fulfilling a number of promises made on the campaign trail. On his first day in office, the president issued an immigration reform proposal that includes a pathway to citizenship for undocumented immigrants and a strategy to address the root causes of migration.

In a few short hours, the White House completely changed the tone of our national discourse on immigration. While campaigning and during his presidency, Donald Trump played on nativist fears by using the term invasion to describe the changing demographics of the United States. A positive tone is unquestionably a significant development in itself, but Mr. Biden has already demonstrated that he will go beyond mere words.

The new president has signed eight executive orders related to immigration in his first two weeks in office. He also signed an order that restores the inclusion of noncitizens in the official U.S. Census count. Many of these actions are direct reversals of President Trump’s anti-immigrant measures. These measures are important first steps, but immigration reform must move beyond executive orders.

A positive tone is unquestionably a significant development in itself, but Mr. Biden has already demonstrated that he will go beyond mere words.

Mr. Biden fully restored the Deferred Action for Childhood Arrivals, an Obama-era policy that protected from deportation undocumented immigrants brought to the United States as minors. While ultimately blocked by the courts, Mr. Trump had attempted to end this program, popularly known as DACA. President Biden also ended the Migration Protection Protocols, commonly known as the Remain in Mexico policy, which forced vulnerable asylum seekers who arrived at the southern border to wait for their court dates amid precarious conditions in Mexico.

Mr. Biden also halted construction of the border wall, which Mr. Trump famously promised would be financed by the Mexican government. And Mr. Trump’s travel bans, which barred travelers from certain nations with large Muslim populations, are also now a thing of the past. In short order, Mr. Biden used his office to reverse course on capricious immigration enforcement within the United States.

Under the Trump administration, immigration officials put into force a zero-tolerance policy on unauthorized border crossings that led to the separation of thousands of children from their parents at the U.S.-Mexico border. While the trauma this inflicted on families cannot be reversed, Mr. Biden did order on Feb. 2 the formation of a task force to reunite hundreds of families who remain separated because of the Trump administration policy.

Mr. Biden used his office to reverse course on capricious immigration enforcement within the United States.

On the same day, Mr. Biden ordered both expanded avenues for legal migration from Central America and measures to address the conditions that cause Central Americans to flee their home countries. And he issued an executive order to review policies introduced by the Trump administration to determine whether they meet the goal of promoting the inclusion and integration of immigrants into American society.

While the U.S. Conference of Catholic Bishops has rightly voiced its differences with Mr. Biden’ decisions related to abortion policy, the bishops have nevertheless applauded the administration for the many steps it has taken to improve the lives of immigrants.

“The Catholic Church teaches that each person is created in the image and likeness of God and that we must uphold the inherent dignity of each person,” the Most Rev. Mario E. Dorsonville, auxiliary bishop of Washington and chairman of the U.S.C.C.B.’s Committee on Migration, said in a statement.

“As a society, we must remain consistent in our openness and treatment of all persons, regardless of whether they were born in the United States or immigrated here,” he said. “We know that changes will take time but applaud President Biden’s commitment to prioritize assisting our immigrant and refugee brothers and sisters. We also offer our assistance and cooperation on these urgent matters of human life and dignity.”

Americans can rejoice today that this cruelty has come to an end, thanks to Mr. Biden.

The U.S. government’s anti-immigrant actions certainly did not begin with Mr. Trump. Since President Reagan signed the Immigration Reform and Control Act of 1986, which legalized millions of undocumented immigrants, immigration reform has largely focused on enforcement and border security. Both Republican and Democratic leaders, for example, joined to pass the 1996 Illegal Immigration Reform and Immigrant Responsibility Act, the 2001 Patriot Act, the 2005 Real ID Act and the 2006 Secure Fence Act. And while Mr. Obama took some executive actions to protect immigrants, his administration unwisely escalated the number of deportations and began the temporary detention of unaccompanied migrant children in chain-link enclosures, which reached its appalling zenith during the next administration.

The Trump administration brought U.S. immigration policy to rock bottom in terms of morality. Mr. Trump’s approach, in words and actions, was typified by cruelty. The administration appeared to be inflicting these inhumane conditions in an effort to break the spirits of migrants and asylum seekers, believing that their suffering would cause them to abandon their efforts to enter the United States. Americans can rejoice today that this cruelty has come to an end, thanks to Mr. Biden.

But the work is far from over.

As the Kino Border Initiative recently noted, there are still thousands of asylum seekers waiting on the southern border because of the Remain in Mexico policy. Its suspension by the Biden administration does not change the reality for those who are currently enrolled and still waiting. Mr. Biden must immediately end Remain in Mexico for those who are already enrolled and must end Title 42 public health restrictions on the border, a measure to which experts object.

Mr. Biden must also reconsider enforcement strategies from Immigration and Customs Enforcement and U.S. Customs Border Protection. As recently called for by Catholic bishops in border dioceses, the Biden administration must ensure that U.S. asylum law adheres to international standards. Mr. Biden must also take steps to address the paralyzing backlog of more than 1.3 million cases in immigration courts.

Immigration reform, however, must move beyond executive orders. President Obama and President Trump have both had their actions on immigration reversed by their successors. Unlike executive actions, Mr. Biden faces a much steeper challenge in working with Congress to pass needed permanent legislation on behalf of immigrants while safeguarding the future vitality of the United States.

This is just the beginning. Catholics and others who support immigrants may take Mr. Biden’s first weeks of office as a hopeful sign of things to come. But we must also remain vigilant. Mr. Biden will need broad support from faith communities if he is to lead this country through the comprehensive immigration reform it so desperately needs.