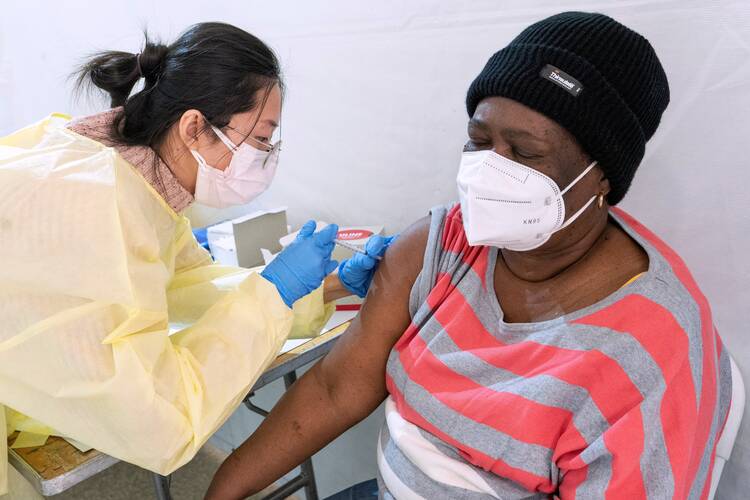 Shyun Lin, a registered nurse in the Brooklyn borough of New York City, gives Alda Maxis, 70, the first dose of the COVID-19 vaccine at a pop-up vaccination site in the William Reid Apartments Jan. 23, 2021. (CNS photo/Mary Altaffer, Pool via Reuters)

The Catholic Health Association, a group of 23 Catholic health care systems that collectively employs nearly 500,000 people across 46 states and Washington, D.C., announced its commitment to the pursuit of health equity in order to help fight systemic racism. The plan places a particular emphasis on ensuring equal access to Covid-19 testing, treatment and vaccination.

Tragedies in communities of color, such as police killings and the disproportionate impact of the pandemic, “demonstrate the urgent need to address the devastating impact racism has had on the health and well-being of individuals and communities,” Mary Haddad, R.S.M., the president of the Catholic Health Association, said in a press release on Feb. 4.

“We in the Catholic health ministry, responding to the Gospel mandate for justice, are called to renew our commitment to eliminate the racial inequities in our communities and to acknowledge and confront our own shortcomings so that we can become agents of healing and positive change.”

As part of the “Confronting Racism by Achieving Health Equity” initiative, partner institutions pledge to seek equity related to Covid-19, especially for the elderly and communities of color; examine diversity in their leadership teams; partner on efforts to improve education, increase access to housing and push for criminal justice reform; and work to increase trust between health care providers and minority communities.

Organizers of the initiative highlighted some partnerships already underway, including a decade-long initiative launched by CommonSpirit Health and the Morehouse School of Medicine that seeks to invest $100 million “to expand opportunities for Black and other underrepresented physicians,” according to the press release. That program, announced in December, began with a $21 million investment from CommonSpirit and Morehouse, a historically Black medical school in Atlanta.

Some Catholic hospitals, particularly so-called safety net institutions that serve patient populations without widespread access to private health insurance, have been hard hit during the Covid-19 pandemic. Many such institutions primarily serve people of color.

In Chicago, a group of neighborhood activists protested against the decision by Trinity Health to close Mercy Hospital, which is located in a predominantly African-American community and serves patients who rely primarily on Medicare and Medicaid. In December, state regulators denied the hospital’s application to close, saying the health of people living near the hospital would be harmed. Trinity Health said they planned to appeal the ruling.

Michael Slubowski, the head of Trinity Health, was quoted in the press release announcing the new anti-racism initiative, saying the Michigan-based health system is “committed to breaking down barriers and improving health disparities that result from inequities and systemic racism.”

Responding to a broader question about health systems supporting financially strapped hospitals serving communities of color, Dr. Tamarah Duperval-Brownlee, a senior vice president at the St. Louis-based health care organization Ascension, said that collaboration between Catholic entities and other health care providers could be “essential” in ensuring that vulnerable and marginalized communities receive access to care.

“How can we work collaboratively...to meet the needs? And how do we do that in a way that leverages the strengths that each of us may have?” she said, referring to Ascension’s efforts to partner with community organizations.

By taking steps, such as providing assistance with transportation to appointments, in order to close gaps in patient care, Catholic health systems can help people in underserved communities access the care they need, said Ernie Sadau, the head of Texas-based Christus Health.

“We have a lot of work to do yet,” he said. “That's why it's so critical that as a Christus ministry and as Catholic health care, we network with other providers, other health care providers, other partners in the communities, that together we can do more.”