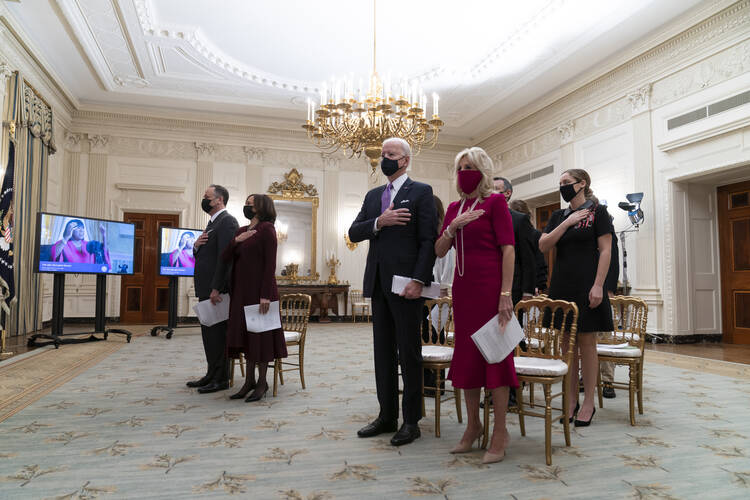 WASHINGTON (AP) — President Joe Biden on Thursday called for a confrontation of the “political extremism” that inspired the U.S. Capitol riot and appealed for collective strength during such turbulent times in remarks at the National Prayer Breakfast, a Washington tradition that asks political combatants to set aside their differences for one morning.

The breakfast has sparked controversy in the past, particularly when President Donald Trump used last year's installment to slam his political opponents and question their faith. Some liberals have viewed the event warily because of the conservative faith-based group that is behind it.

Still, Biden campaigned for the White House as someone who could unify Americans, and the breakfast gave the nation's second Catholic president a chance to talk about his vision of faith as a force for good.

“For so many in our nation, this is a dark, dark time,” Biden told those watching the event. “So where do we turn? Faith.”

President Joe Biden called for a confrontation of the “political extremism” that inspired the U.S. Capitol riot and appealed for collective strength during such turbulent times in remarks at the National Prayer Breakfast.

Sen. Chris Coons, D-Del., said the event is “an inclusive and positive” one that “recognizes the teachings of Jesus but is not limited to Christianity."

The breakfast is moving forward at a time when the nation's capital is facing a series of historic crises. Biden is struggling to win significant support from congressional Republicans for a coronavirus response package, raising the likelihood that he will rely only on Democrats to pass the legislation.

Many in Washington are still navigating the aftermath of the deadly insurrection at the U.S. Capitol last month, which Biden alluded to in his remarks Thursday, referencing the “political extremism" that propelled the siege. Trump faces an unprecedented second impeachment trial in the Senate next week over his role in inciting the riot.

Biden’s message on Thursday marked his latest call to return Washington to more traditional footing after four years of Trump’s aggressive style. During the 2020 breakfast, Trump singled out Democratic House Speaker Nancy Pelosi and Republican Sen. Mitt Romney of Utah, who had voted to convict the president during his first impeachment trial. Trump even held up a newspaper with a headline reading “ACQUITTED” over his own picture.

Biden campaigned for the White House as someone who could unify Americans, and the breakfast gave the nation's second Catholic president a chance to talk about his vision of faith as a force for good.

Every president has attended the breakfast since Dwight D. Eisenhower made his first appearance in 1953. The event went entirely virtual this year because of the coronavirus pandemic, with Biden and all other speakers appearing via taped remarks. Four living former presidents sent messages to the breakfast, with three speaking on tape while Coons read a message from former President Jimmy Carter — making Trump’s absence conspicuous.

South Carolina Sen. Tim Scott, a GOP co-chair of this year’s breakfast, pointed to regular faith-based gatherings on Capitol Hill that draw senators from both ends of the ideological spectrum as a model for the event. “We don’t see eye to eye philosophically, politically, but we do embrace each other as brothers of faith,” Scott, who also offered virtual remarks at the breakfast, said in an interview.

The breakfast has drawn pushback from gay and civil rights activists since President Barack Obama’s administration, with much of the opposition focused on the Fellowship Foundation, the conservative faith-based organization that has long supported the event. Religious liberals mounted a protest outside Trump’s first appearance in 2017, criticizing his limits on refugee admissions to the U.S., and a Russian gun rights activist convicted of acting as an unregistered foreign agent attended the breakfast twice during his administration.

Norman Solomon, co-founder and national director of the progressive activist group RootsAction, warned Biden not to “reach across any aisle to bigotry.”

“For so many in our nation, this is a dark, dark time,” Biden told those watching the event. “So where do we turn? Faith.”

“We don’t need any unity with bigotry,” Solomon said. “I fear a subtext of this engagement is, ‘Can’t we all get along.’ But that’s not appropriate in this case given the well-known right-wing and anti-gay background of the event’s sponsors.”

Solomon said Democratic presidents have continued a tradition of attending an event where their Republican counterparts often felt more comfortable because they feared being labeled as “anti-religious or nonreligious.” He said that Biden, a devout Catholic who attends Mass every week, could better send a unifying message by skipping the event and instead attending one that is truly bipartisan.

“God knows there are many religious leaders and gatherings that are devout and affirm human equality,” he said. “This isn’t one of them.”

Rachel Laser, president and CEO of Americans United for Separation of Church and State, agreed that “there are far better ways” than the breakfast for Biden to connect with people on the basis of shared spiritual beliefs.

“We would love to work with the administration to figure out a way to change the sponsorship of an event like this and to make it a place for Americans of all different religious beliefs,” Laser said.

Yet Democratic leaders, aware of Biden’s devout Catholic faith and calls for healing, have largely refrained from public comment on the event this year. Pelosi, D-Calif., taped her own message to the event on Thursday morning.

Both Laser and Guthrie Graves-Fitzsimmons, a fellow in the faith initiative at the liberal Center for American Progress think tank, pointed to the Christian symbolism seen during last month’s Capitol riot as an opening for Biden to offer pluralistic, open language about faith going forward.

“I hope President Biden recognizes we’re in a new moment," Graves-Fitzsimmons said, "and that the Christian nationalism threat is a threat to both the sacred religious pluralism of the U.S. and to Christianity.”

Will Wessert, Associated Press
Show Comments ()
Join the conversation: Login or create an account
Before you can comment, you need to update your profile to include your first and last name, as required in our comments policy. Then reload this page and you'll be set up for commenting. Update your profile