Joe Biden knows the grief of losing family—and how our pain can have a purpose. 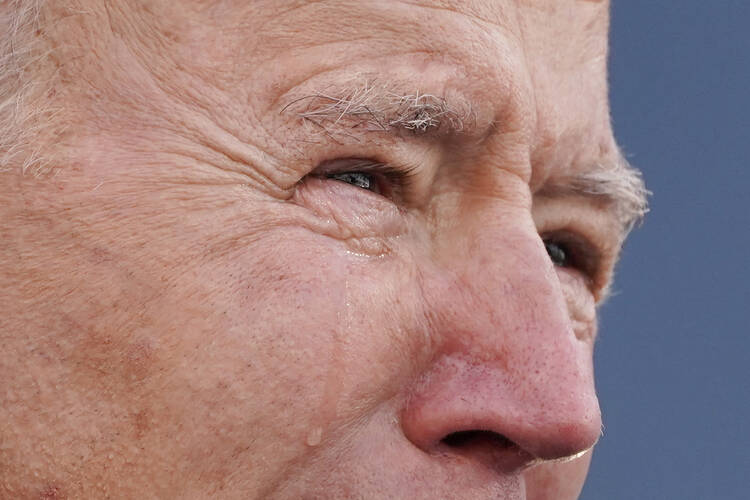 I am asked sometimes how I came to be a student of the life and work of the late Bobby Kennedy. The answer is less obvious than one might think. I was about 13, browsing at my local library on Cape Cod, when I came upon a little-known biography of him. For a budding political junkie, Bobby Kennedy: The Making of A Folk Hero was the find of the day. I dove in and learned a lot I had not known about the history of a time I had not lived through, from Kennedy’s beginnings in his big, privileged, Irish Catholic family to his unique, historic partnership with his brother Jack to his own groundbreaking bid for the presidency in 1968.

But it was Bobby Kennedy’s personal story that took hold—his journey from the depths of despair to the heights of American politics in the five short years from 1963 to 1968. That hit home. My older brother Joe had died in a car accident just a few months before that library visit. He was 16 and had been suddenly, violently, taken from us. I was struggling to mourn, terrified of the depth of my grief. While everyone in my family was wracked by the same sorrow, I still felt strangely isolated, somehow different. I learned later why I had felt that way: Mourning is the loneliest place in the world.

I found a companion in Bobby Kennedy. I learned how he had been similarly shattered by the death of a brother but somehow managed to pick up the pieces—to survive.

Yet on that day, while browsing the stacks, I found a companion in Bobby Kennedy. I learned how he had been similarly shattered by the death of a brother but somehow managed to pick up the pieces—to survive; how God’s grace had forged in the crucible of his grief a soul in communion with the world’s pain; how the night of Bobby’s sorrow gave way to the light of day, when his mourning became his mission and his wounded heart became the heart of a wounded healer; how he then ran for president because, he said, “I want the United States to stand for the reconciliation of men.”

I thought of Bobby and my brother Joe many times during the last few years as I watched Joe Biden’s steps on a similar pilgrimage. Most of the world knows by now that Joe Biden has faced more than his fair share of loss, including the tragic deaths of his wife and daughter in 1972 just as his political career was beginning. And Mr. Biden’s agony was on public display as he mourned his son, Beau, in 2015. His grief, he said, prevented him from running for president in 2016.

Yet by 2020 something had changed.

There were hints along the way. There was Beau’s lasting wish that his father make a run for the White House, which Mr. Biden talks about at length in his book, Promise Me, Dad. But Beau’s influence didn’t end there. The people Joe Biden picked for vice president and for secretary of defense, among others, were chosen in part because of their ties to Beau. He visited Beau’s grave the morning of the election. During his victory speech in Wilmington, Mr. Biden quoted from the hymn “On Eagle’s Wings,” which had been sung at Beau’s funeral Mass. To deliver the invocation at his inauguration as president, President-elect Biden chose the Jesuit priest who presided at Beau’s funeral. And 24 hours before his swearing in, during his farewell address in Delaware, he spoke again of his son: “I have only one regret,” Mr. Biden said. “He’s not here, because we should be introducing him as president.”

The story of Joe Biden in these years can be told in many ways. But from my vantage point, it is the story of one soul’s journey from darkness to light, from Good Friday to Easter Sunday. It is the way marked out for us by the Lord himself. Joseph Tetlow, S.J. once wrote a prayer that describes what I am getting at: “I choose the awful agony of Christ, to charge my senseless sorrows with meaning and to make my pain pregnant with power.”

The story of Joe Biden in these years can be told in many ways. But from my vantage point, it is the story of one soul’s journey from darkness to light, from Good Friday to Easter Sunday.

“The pilgrimage from despair to hope, from death to life, is our journey, too,” I wrote on the 50th anniversary of Bobby Kennedy’s death. “For as he did for Bobby Kennedy, God calls every one of us out of darkness and into his light. In the light of his grace, we cannot see what might have been. But we do see what was, and the power and spirit of what was, married to grace, are enough to dream anew of what might yet be.”

When we are in the grip of mourning, of course, it is impossible to see how our pain can have a purpose, how it can have any meaning at all. And the loss of a child is a singular agony. (My dad once told me that for months after Joe’s death, he was in physical pain, as if part of his body had been torn out through a still-open wound.) And yet, even in the darkness, a light shines, however dim. That is the light that leads to life, to purpose, to hope.

God knows it is not easy. Joe Biden knows that. I certainly know it, and I suspect that you do, too. And I know that Bobby Kennedy knew it. There is a reason that these words of Aeschylus, which Bobby could recite from memory, are etched into the marble at his gravesite:

He who learns must suffer. Even in our sleep, pain which cannot forget, falls drop by drop upon the heart, until, in our own despair, against our will, comes wisdom to us, through the awful grace of God.

https://www.youtube.com/watch?v=kznYBvUf5UI&amp%3Bt=1sMatt Malone, S.J., is the President and Editor in Chief of America Media.