The future of the pro-life movement after Trump 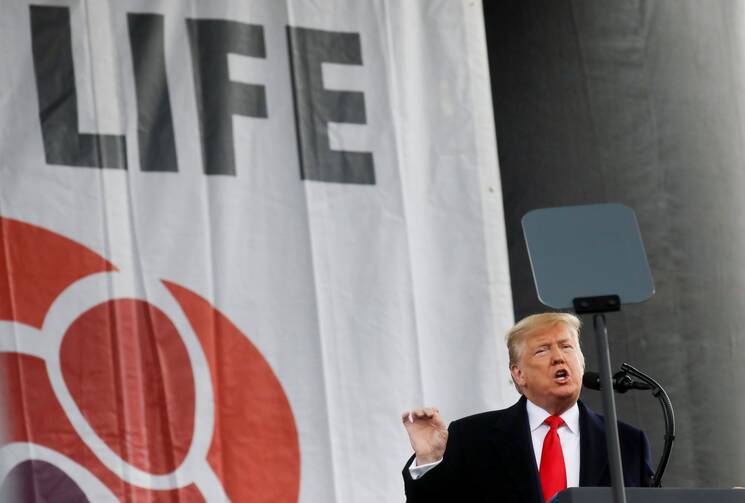 (RNS) — I recently published an open letter to Pope Francis urging him to make prenatal justice a central part of his pontificate, knowing that my letter risked my being castigated by old friends on the Catholic left, such as one who has insisted that, given some pro-lifers' shameful alliance with the Trump administration, pro-life activists should now “go away into the wilderness for 40 years.”

This person largely agrees with the Catholic Church's teaching on the sanctity of life — in fact, he has been an activist for some time in this area. If someone like him believes that the pro-life message has been so deeply tainted by its association with former President Donald Trump, what must those who oppose the pro-life movement think?

The pro-life movement, however, has much in its favor as it tries to recover from the Trump era. One, perhaps counterintuitively, is the movement's origins in the U.S. as a motley crew of 1970s-style activists committed in some messy way to resisting both the violence of the Vietnam War and the violence of abortion.

The press doesn’t often cover us this way, preferring to funnel all pro-life coverage through the religious right's agenda on abortion. But in truth one of the most gratifying facets about the pro-life community is how ideologically diverse we are, 50 years after we began.

This ideological diversity naturally breeds disagreements, even very serious and difficult ones. I am not the only one in the pro-life community who has strongly resisted making alliances with the Trump administration for many reasons. Even though more short-term good was accomplished than I thought possible, I still disagree with my pro-life friends who connected the movement to Trump.

But such disagreements, like our ideological diversity, makes us quite nimble in meeting challenging cultural shifts.

One of the most gratifying facets about the pro-life community is how ideologically diverse we are, 50 years after we began.

We need to capitalize on that ideological diversity by putting aside our political alliances of the last 40 years. The pro-life message does not fit neatly into left/right political binaries. Anyone who reads the gospel, or St. John Paul II’s " Evangelium Vitae," already knows this.

Pro-lifers need to be able to move in and out of multiple issues and political constituencies. We need to save babies’ lives by working to reduce access to abortion and increase prenatal justice on the one hand, while also working with more progressive folks to mitigate abortion demand.

It's long past time to fully welcome Democrats for Life, Consistent Life, Secular Pro-life, Feminists Choosing Life, New Wave feminists, Feminists for Life, Rehumanize International and the American Solidarity Party into the movement, and allow their wisdom to help guide our approach.

Given that Trump has alienated young people in particular, we also need to focus on education, particularly of middle- and high-schoolers. We must make sure that there is a good Catholic curriculum of the fullness of the church’s pro-life vision. This curriculum should not proselytize or indoctrinate, but bring to bear the massive resources of the Catholic intellectual tradition — one that historically takes the arguments of our opponents seriously.

We need to save babies’ lives by working to reduce access to abortion and increase prenatal justice on the one hand, while also working with more progressive folks to mitigate abortion demand.

We need to establish credibility with a younger generation that implicitly cares about racial justice, but is being taught to see this and other social justice issues as antithetical to being pro-life.

And not only for the sake of the young: Focusing on racial justice will lead to far fewer abortions, but it is an essential pro-life issue on its own terms, as anyone who has listened to Gloria Purvis or Ben Watson already knows.

There really couldn’t be a better time for the pro-life movement to be salt and light in precisely this way. The country is in the middle of a dramatic political realignment, in which the coalitions of the early 1980s are not long for this world — if they are not already destroyed. There is a new hope, as I argued in a previous column, for a populist movement that would uphold the church's teachings on abortion and euthanasia while also working for a more socially just culture at the same time.

In my open letter to the Holy Father, I argued he is “perfectly positioned to insist that prenatal children must be treated the same as other children under law as a matter of justice, but also to show how this is consistent with (not opposed to) treating women as the equals of men.”

Pope Francis’ witness shows how concern for multiple pro-life issues does not dilute the power of the movement, but makes it stronger

It is precisely because Francis has lived out the fullness of the church’s pro-life vision that he is in such a strong place to make this kind of clarion call. People would hear him in ways they can’t hear other pro-lifers.

Pope Francis’ witness shows how concern for multiple pro-life issues does not dilute the power of the movement, but makes it stronger. Francis' position cannot credibly be dismissed as misogyny, conservative ideology, religious extremism or obsession with sex.

Indeed, the pro-life movement after Trump must become more like Pope Francis. If those who disagree with us are to have any chance of moving in our direction, they must be convinced that we are working on issues of fundamental human rights and fundamental justice.

If we do not do this, then maybe my friend is right. We should wander in the wilderness for 40 years until the great shame of associating with Trump is forgotten.