Microplastics are toxic to fetal development—a reminder that the environment is a pro-life issue, too. 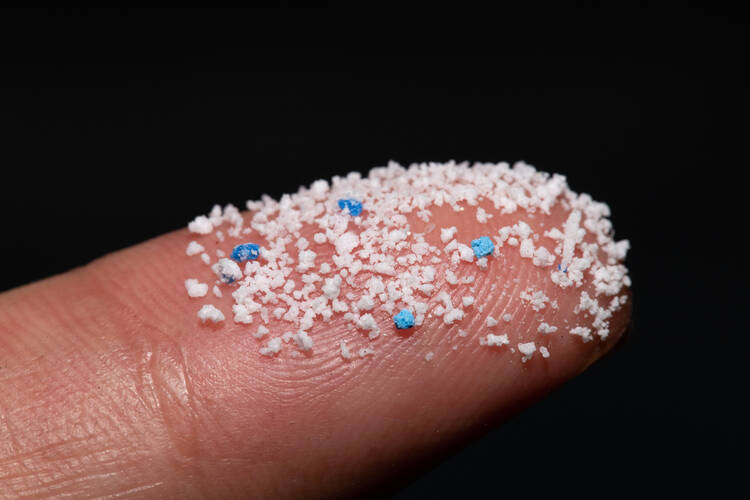 The microplastics discovered in human placentas were much smaller, invisible to the naked eye, but they are part of a rapidly worsening pollution crisis. (iStock/pcess609)

My oldest daughter—now 7—was born on Earth Day, and she has accepted this as a propitious coincidence. Each year, she organizes her younger siblings and friends for a celebration of what she calls her “Earth Day-Birthday,” which includes some sort of care-for-creation activity, such as cleaning up the litter cluttering her favorite duck pond. It is always a big hit.

Once, as I reflected on the way the kids participate so enthusiastically in these acts of reviving the health and beauty of our planet, I was struck by a thought: Perhaps their innate sense of connection to the Earth comes from the fact that children are conceived and nurtured for their first 40 weeks within a purely organic environment. I found this to be a lovely idea.

But this idea is challenged by an article in the January 2021 issue of the journal Environment International which reveals that scientists have, for the first time, discovered microplastics in human placentas—creating a kind of “Plasticenta,” as the title of the article puts it. The particles were identified as the residue of “paints, coatings, adhesives, plasters, polymers and cosmetics and personal care products.” A total of 12 particles were found in four placentas, out of six donated to Italian scientists.

The particles were identified as the residue of “paints, coatings, adhesives, plasters, polymers and cosmetics and personal care products.”

Apparently, there really is no place uninhabited by these tiny polymers: They have been found on the peak of Mount Everest and in the deepest trench of the ocean, and now it appears that our children are being formed in wombs infused with inorganic material.

While images of birds and marine animals with stomachs full of plastic have become all too common in recent years, it is difficult to imagine human children surrounded by plastic during their prenatal development. The microplastics found in placentas do not take up the same amount of space, of course—microplastics are defined as being less than five millimeters in size, and the dozen discovered in the study were each 5 to 10 micrometers, using a unit of measurement equal to one-millionth of a meter—but they are known to be toxic.

It has been clear for many years that the overuse of plastic is harmful. First, the production of plastic involves oil-based chemicals, a leading contributor to humanity’s massive carbon footprint, which is a driver of climate change. Then, disposed plastic products help to destroy ecosystems and to endanger animals, killing millions every year, according to National Geographic. Unfortunately, the problem cannot be mitigated through recycling alone. And nearly 80 percent of plastic becomes plastic waste, even if much of it is theoretically recyclable.

The chemicals contained in plastics can leach into foods and beverages, causing a range of human health problems.

Further, the chemicals contained in plastics can leach into foods and beverages, causing a range of human health problems, such as cancer, reproductive issues, metabolic disorders, asthma and neurodevelopmental conditions. The study in Environment International also notes that microplastics can “act as carriers for other chemicals, such as environmental pollutants and plastic additives, which may be released and are known for their harmful effects.”

Though more research is necessary to determine the effect of plastics on prenatal development, their presence in the placenta is a matter of urgent concern. Specifically, the Italian researchers worry that microplastics “may alter several cellular regulating pathways in placenta,” which could interfere with the implantation of the embryo, fetal growth and development, maternal-fetal communication and more. All these effects could induce serious, long-lasting, and potentially fatal health and developmental complications in mothers and their children. Indeed, research suggests that adverse pregnancy outcomes such as pre-eclampsia and fetal growth restriction can be traced to defects in early placental development.

We can no longer look at environmental degradation as separate from, or tangential to, pro-life issues.

Despite these harms, the “Plasticenta” study notes, “In the last century, the global production of plastics has reached 320 million tons (Mt) per year, and over 40% is used as single-use packaging, hence producing plastic waste.” This number has increased exponentially, National Geographic reports: Half of all plastics ever made have been produced since 2005—and production is expected to double again by 2050. The Covid-19 pandemic has not helped matters, as it is projected that more than 1.5 billion single-use masks made with polypropylene and other plastics will pollute the ocean this year alone, breaking down into microplastics that will invade our food chain and, subsequently, our bodies.

This should be an issue that disturbs all of us. But some Americans who are resolutely pro-life when it comes to issues like abortion are reticent about addressing systemic environmental problems, including plastic pollution. Some go so far as to deride those who encourage environmental protection. Think, for example, of the “Trump Straws” produced as an ironic response to “liberal” paper straws and references to the “straw police,” as U.S. Rep. Devin Nunes labeled those seeking to limit single-use plastics like bags and straws.

With the discovery of microplastics in human placentas, we can no longer look at environmental degradation as separate from, or tangential to, pro-life issues. Any person who values fetal life must not only fight against abortion but also advocate for environmental protections. Members of both major political parties should be engaged in this endeavor.

Pope Francis tells us in “Laudato Si’” that “we are faced not with two separate crises, one environmental and the other social, but rather with one complex crisis which is both social and environmental,” and throughout his papacy he has been exhorting the faithful to view the world with an integral vision. In Let Us Dream, he urges us to “practice an integral ecology, allowing the principle of ecological regeneration to shape the decisions we take at every level.”

Though the political divide in the United States has made it seem impossible to value unborn life while promoting policies that are eco-friendly, Catholics are called to traverse this divide and do both—because the two are intrinsically interconnected. If we have the courage to do this, the political and atmospheric climates will improve, as will the health and wellbeing of children in utero and across the globe.