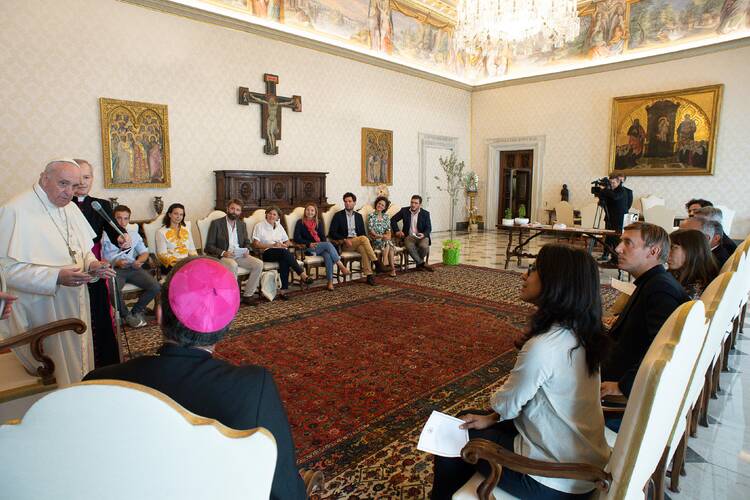 Pope Francis meets with a group of clergy and laypeople advising the French bishops' conference on ecological policies and on promoting the teaching in his encyclical, "Laudato Si', On Care for Our Common Home" on Sept. 3, 2020. Actress Juliette Binoche, to the pope's left in the white and yellow blouse, was part of the meeting in the library of the Apostolic Palace at the Vatican. (CNS photo/Vatican Media)

Pope Francis, speaking off the cuff to a group of French environmental activists in Rome on Thursday, gave the inside story of how he came to write “Laudato Si’,” his acclaimed encyclical. He described how he had pushed hard in the Vatican for its early publication, in June 2015, so that it would influence the United Nations–sponsored Paris Conference on Climate Change that was held at the end of that year.

The pope was greeting the French experts who had assisted the French Bishops’ Conference in its reflection on the themes of “Laudato Si’” when he described the encyclical’s origins. Among those at the Sept. 3 meeting was the actress Juliette Binoche and Archbishop Eric de Moulins Beaufort, president of the bishops’ conference, who took the initiative of asking for this meeting.

Francis arrived with a prepared text in which he offered them strong encouragement, urging that they should not lose hope even if the global ecological situation seems catastrophic. But he surprised them by putting his text aside, saying they could read it later, and opted instead to speak to them from the heart, spontaneously.

Between 2007 and the publication of “Laudato Si’” in 2015, Pope Francis “underwent a journey of conversion of the ecological problem. Before that I didn’t understand anything.”

He began by sharing with them “a piece of history,” his personal history. He recalled that he was participating in the meeting of the Conference of the Latin American Bishops’ Conferences at Aparecida, Brazil, in 2007 and was one of the editors of its final document. In fact, he was voted almost unanimously to be editor-in-chief, though he did not mention this. As they were working on the final text, he said, the proposals on Amazonia arrived, and “I said, ‘How these Brazilians insist on this Amazonia. What has Amazonia got to do with evangelization?’”

He revealed that between that conference in 2007 and the publication of “Laudato Si’” in 2015, “I underwent a journey of conversion, of conversion of the ecological problem. Before that I didn’t understand anything.”

He then recalled another important moment in that journey: when he went to Strasbourg, France, on Nov. 25, 2014, where he addressed the European Union’s Parliament and the Council of Europe. The French president, François Hollande, sent Ségolène Royal, the minister for the environment, to welcome him. They spoke briefly at the airport on his arrival, he said, but their conversation continued before he departed because of a delay in the program.

During that time, she asked him, “Is it true that you are writing something on ecology?”

When he confirmed this, she urged him, “Please publish before the Paris conference!”

Francis revealed that on his return to Rome he called “the team” that was working on the text and he explained to his French audience, “You should know that I did not write this by my own hand alone. There was a team of scientists and a team of theologians, and all together we reflected on this [subject].”

He said he told his team that the encyclical had to come out before the conference so that it might pressure its participants to come up with real proposals.

He confided to his French audience, “When I began to think about the encyclical, I called the scientists...and I told them: ‘Tell me the things that are clear and proven, not the hypotheses, the reality.’ And so they brought me those things which you today read there [in the encyclical].

“Then I called a group of philosophers and theologians and I said to them: ‘I want you to make a reflection on this. Work and dialogue with me.’ And they produced the first draft, and then I intervened. And, at the end, I did the final text. That is the origin [of the encyclical].”

Pope Francis told the French ecology experts, “I want to underline that [I went] from understanding nothing at Aparecida in 2007 to [being able to author] the encyclical.”

He added, “I like to give this testimony [because] we must work so that everyone makes this journey of ecological conversion.”

The first Latin American pope then went on to speak about the Synod on the Amazon Region in 2019. He recalled that when he went to the region in June 2018, “I met many people.”

He visited the city of Puerto Maldonado in the Peruvian region of Amazonia and spoke with people from different indigenous cultures. “I had lunch with 14 chiefs, wearing their traditional robes and feathers. They spoke with a language of wisdom and intelligence. Very high [levels]! Not just of intelligence but also of wisdom.”

On inquiring about their line of work, he said, he learned that one man was a university professor, a woman was the minister of education in the region, while a third was a young woman studying political science at the university.

He suggested that “it is necessary to eliminate the image of the indigenous people who we only see with arrows.” He saw “the wisdom” of these people, “the wisdom of ‘good living,’ as they call it,” and “of living in harmony with creation.”

Francis remarked, “We have lost this wisdom of good living! But the original peoples bring us this open door.”

Francis recalled, too, that some elders of the first nations of Western Canada lament that their grandchildren go to the cities, take up modern things and forget their roots. But, he said, “Forgetting one’s roots is a drama not only of the aboriginal peoples but also of the contemporary culture.”

Francis labelled this as “the harmony of wisdom.”

In our “ecological conversion,” the pope said, “we must work on human ecology, on our tenderness and capacity to caress. You with your children!” He added, “This capacity to caress is a thing of good living in harmony.”

Pope Francis told the French experts that “ecological conversion enables us to see the general harmony, the correlation of everything; how everything is related, everything is in relation.”

But, he said, “in our human societies today, we have lost this sense of human correlation, of that fundamental relation that creates human harmony. And often we have lost the sense of roots, the sense of belonging.” He emphasized the importance of “caring for this, of caring for the roots of our belonging” and “the relations between grandparents and grandchildren and dialogue between them.”

He thanked the French experts for the work they were doing and asked them to “pray for me. I need it.”

He told them, “This work is not easy, but may the Lord bless you all.”

[Read this next: Top Ten Takeaways from ‘Laudato Si’’]