Can defendants get a fair trial at the Vatican? The Vatican decides it doesn’t want to hear Italy’s answer 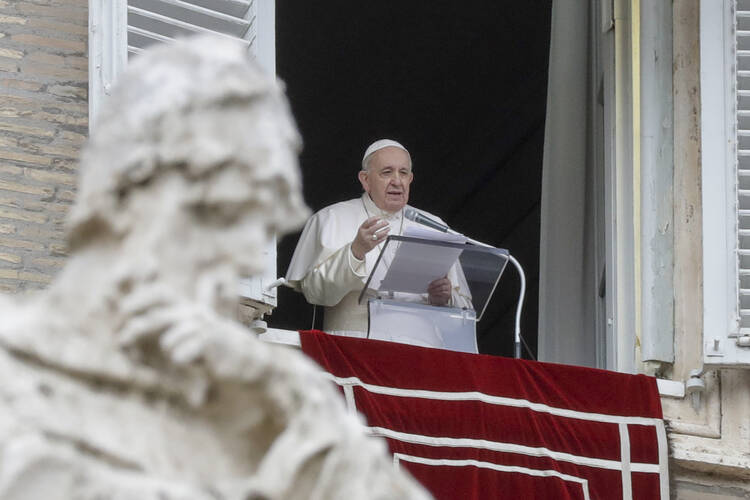 In this Dec. 8, 2020 file photo, Pope Francis delivers his message during the Angelus noon prayer from the window of his studio overlooking St.Peter's Square, on the Immaculate Conception day, at the Vatican. (AP Photo/Andrew Medichini, file)

ROME (AP) — The Vatican on Monday abruptly abandoned its extradition request for an Italian woman wanted on embezzlement-related charges in a case that could have tested whether Italy considers the Vatican a place where someone can get a fair trial.

At the hearing in a Milan court, the Vatican said it no longer was seeking to detain Cecilia Marogna, thereby removing any reason to proceed with an evaluation of her extradition. A statement from Vatican prosecutors said their decision would let her participate freely in an “imminent" trial in the city state.

However, the maneuver seemed more aimed at avoiding an embarrassing precedent that the Milan court could have set by ruling against Vatican prosecutors, given there is no extradition treaty between the two states. Marogna’s lawyers could have also argued that without such a treaty, Italian law bars sending citizens to a country where their “fundamental right” to a fair trial isn’t guaranteed.

Vatican prosecutors have accused Marogna of embezzlement and misappropriation of Holy See funds. They say she was paid at least 575,000 euros by the Vatican secretariat of state from 2018-2019 to help liberate Catholic hostages, but that the money was used instead to buy Prada, Chanel and other high-end luxury goods.

Cecilia Marogna was paid at least 575,000 euros by the Vatican to help liberate Catholic hostages, but that the money was used to buy high-end luxury goods.

Italian police arrested Marogna in Milan on Oct. 13 based on an international warrant issued by the Vatican via Interpol. With the Vatican insisting she posed a flight risk, Marogna was jailed for two weeks before an Italian court ordered her freed. Recently, Italy’s highest court ruled that she never should have been arrested before a court evaluated whether she could be extradited.

In a statement Monday after the Vatican bailed on the extradition request, Marogna’s attorneys blasted what they said was the Vatican’s “dishonorable” decision to give up before the Milan court could rule.

“What a pity!” they said. “We are profoundly displeased that thanks to a last-minute backpedaling ... we weren’t able to obtain full justice with a decision that would have recognized their (Vatican prosecutors') unfounded and arbitrary previous insistence to incarcerate" Marogna.

The Marogna case and related Vatican corruption investigation into a London real estate venture have exposed how the Vatican’s judicial system is inconsistent with European norms.

Italian lawyers who have defended clients before the Vatican tribunal say its procedures are outdated.

Italian lawyers who have defended clients before the Vatican tribunal say its procedures are outdated, don’t provide adequate rights for the accused and are subject to arbitrary interference by the pope, who as absolute monarch exercises exclusive legislative, executive and judicial power.

In the broader corruption case, Pope Francis authorized a procedure that precludes oversight of prosecutors by an independent judge during the investigative phase. There is also no chance for the defense to contest testimony obtained during the investigation or evidence seized during searches, as would be required in Italy.

“Any element that is acquired by the prosecutors' office during the preliminary investigation constitutes a proof" to be used at trial, said Laura Sgro, who has defended clients before the tribunal but isn't involved in this case. “It is absolutely harmful to the defense."

Vatican prosecutors insist the rights of the accused are safeguarded, and that the pope had to order the “summary rite” in this case because of a technicality owing to the old legal code in use.

But outside the city state, Vatican prosecutors have been striking out. Recently, a Rome court declared a Vatican-ordered search of a Rome apartment illegal and without motivation.

Outside the city state, Vatican prosecutors have been striking out.

The Court of Review found that Vatican prosecutors had bypassed the Italian Justice Ministry in amending their search warrant, emailing Italian prosecutors directly to ask Italian police to seize money, gold coins and other goods from the home of Onofrio Tirabassi, the father of a suspect.

The Court of Review declared that the seizure request was “radically null and illegitimate” because it deprived the Justice Ministry the chance to evaluate it, and ordered the money returned to the father, who was not under investigation.

The Marogna investigation is a spinoff of the main Vatican probe into the secretariat of state’s 350 million-euro investment into a London real estate venture, which has caused a scandal because some of it was funded by donations from the faithful.

Podcast: The view of the U.S. Capitol insurrection from the Vatican
Inside the Vatican

Marogna has said she reached out to the secretariat of state's then-No. 2, Cardinal Angelo Becciu, in 2015 with concerns about security for Vatican embassies in hot spots, and was quickly brought into Becciu’s inner circle.

According to text messages reported by Vatican prosecutors, Becciu on Dec. 20, 2018, authorized wiring Marogna’s Slovenian-based Logsic firm 75,000 euros “because it seems something is starting to move” in the case of a kidnapped Colombian nun. Another message said the pope himself was aware of the development and wanted everything kept “in great secrecy.” Four other payments were made to Logsic from January-July 2019.

Marogna told Italian media the money was for compensation and reimbursements for expenses she incurred doing security work for the Holy See. She acknowledged, though, that some purchases, such as a designer pocketbook, were "for the wife of a Nigerian friend who was in a position to talk to the president of Burkina Faso.”

Francis fired Becciu on Sept. 24 for what Becciu said were unrelated embezzlement allegations that he denied. Becciu has said all his relations with Marogna were “exclusively for institutional matters.”