Blocking undocumented workers from Covid vaccines will be a moral and public health disaster, ethicists say 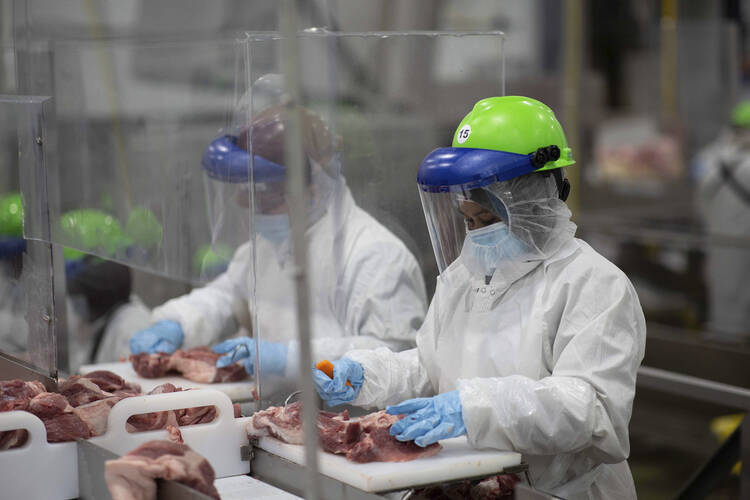 Workers inside a Sioux Falls, South Dakota, pork processing plant wear protective gear and are separated by plastic partitions as they carve up meat. (Photo courtesy Smithfield Foods via AP)

Last week Nebraska Gov. Pete Ricketts raised eyebrows around the country when he told local reporters that undocumented workers in Nebraska’s meat packing industry would not be included in its vaccination program because “you’re supposed to be a legal resident of the country to be able to be working in [meatpacking] plants.”

The comments, which seemed to wish out of existence a significant number of workers in Nebraska, was soon clarified by aides to the governor who explained that undocumented workers would not be blocked from receiving vaccinations but would definitely be at the end of the line in Nebraska. The governor may have expressed a sentiment shared perhaps less loudly by others, but blocking undocumented workers from a place on nation’s vaccination lines or discouraging their participation could prove both a moral and public health disaster, say Catholic ethicists.

Blocking undocumented workers from a place on nation’s vaccination lines would be a moral and public health disaster.

“From a Catholic perspective and I would say from a public-health perspective, there’s unanimity that we want to create the conditions for a healthy society, and that means not discriminating on the basis of immigration status,” said Brian Kane, the senior director of ethics for the Catholic Health Association.

“When we look at the national discussions that have been going on...among the public health officials, it’s agreed that this is something that we must tackle as a full society,” Mr. Kane said. “We need to deal with this as a community and not try to create divisions.”

Mr. Kane believes that undocumented workers should in fact be at the head of the nation’s vaccination lines, arguing that they are especially vulnerable because many are at work in essential industries—thus required that to work outside of their homes—and because they may be in poorer overall health since they are cut off from public health services.

While exact percentages of undocumented workers are not certain, foreign-born U.S. residents often comprise the majority of employees in industries now deemed essential like food processing, preparing and delivering. The Associated Press reports that across the country immigrants make up nearly 40 percent of the meat and poultry processing industry’s 470,000 workers, with high concentrations in states like South Dakota, where they represent 58 percent of the workforce, and Nebraska, where they comprise 66 percent of the workforce. Percentages of undocumented workers at those processing sites range from 14 percent to more than 50 percent.

“U.S. agriculture and the U.S. food system depend upon immigrant workers to fill the jobs on farms and in food processing facilities around the country,” Jim Ennis, the executive director of Catholic Rural Life, told America. “All workers in these essential services should have the opportunity to receive the vaccine.”

Ashley Feasley: “Covid knows no boundaries or immigration status; it is an indiscriminate killer.”

Creating more anxiety about vaccinations among undocumented people that could discourage them from stepping forward to receive vaccinations when they become available creates a peril for all U.S. residents, advocates say.

“Covid knows no boundaries or immigration status; it is an indiscriminate killer,” said Ashley Feasley, the director of policy for the U.S. Conference of Catholic Bishops’ Office of Migration Refugee Services. U.S.C.C.B. officials remain concerned not only that undocumented residents could be shut out of vaccination distributionsffort, she said, but that mixed-status families, those which include both people without documentation and citizens or other permanent legal residents, will be fearful to receive vaccines because of fears “that they will be asked about their family members’ immigration status.”

Mr. Kane noted that initial proposals for the national rollout of Covid-19 vaccinations included plans by the federal government to crosscheck identity and nations of origin—stipulations quickly abandoned after criticism that those requirements would deter undocumented people from seeking vaccinations.

“If they are worried or scared about deportation,” he said, “they’re not going to [seek out vaccinations], and on a very pragmatic level that affects the rest of our community as well. So it’s not only good public health, but it’s good morality to take care of the least of these first; it’s for the good of the entire community.”

After being in the ICU with Covid, my New Year’s Resolution isn’t about my weight—it’s to be a better neighbor
Amanda Martinez Beck

“As public health experts have recognized, the receipt of vaccines should turn on public health criteria, not immigration status,” said Donald Kerwin, the executive director of the Center for Migration Studies in New York. “To deny vaccines to persons who risk their health and lives every day to feed our communities would be not just inhumane and immoral, but a terrible public health practice. I would hope that our country could move beyond this kind of divisive rhetoric and thinking. We’re long past the point where human lives depend on it.”

U.S. bishops have been aggressive advocates for access to coronavirus testing, vaccinations and expanded health care related to the Covid-19 crisis for all U.S. residents regardless of immigration status, according to Ms. Feasley. “This is a very real public health and welfare concern,” she said. “Additionally it should be very concerning to the business community, as we know that many undocumented as well as legal immigrants and refugees are providing vital essential and frontline services at this time.”

According to the Midwest Center for Investigative Reporting, there have been at least 45,000 coronavirus cases tied to 479 outbreaks in meat and poultry processing facilities in 38 states. By mid-December the center tallied 239 reported worker deaths in 27 states. It found 22 deaths from Covid-19 among meat and poultry workers in Nebraska among more than 5,200 cases from 23 outbreaks.

“We will be asking the new Congress to ensure access to stimulus relief for all U.S. citizen children,” Ms. Feasely said, adding “the challenges to ensure that all individuals are included in relief, vaccines and care remains ongoing, and we will continue to engage on this matter both at the federal and state level.”