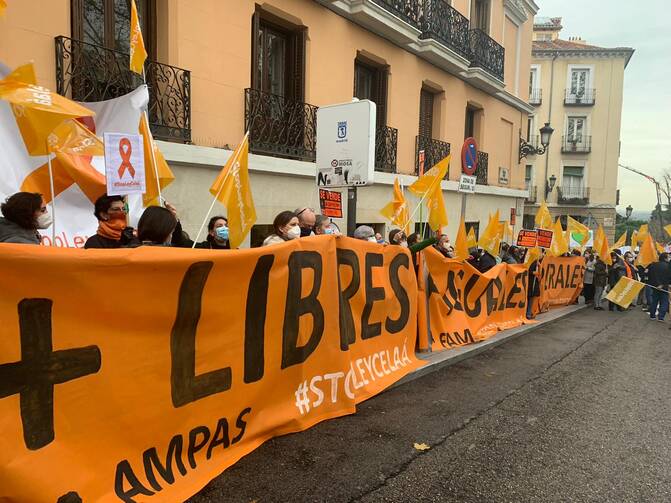 Demonstrations in November were conducted all over Spain against the ‘Ley Celaá.’ Photo courtesy of Mas Plurales.

When the Jesuits opened the Padre Piquer education center in Madrid 55 years ago, the neighborhood around it was viewed as a slum. Over the years the community’s infrastructure drastically improved, but the neighborhood remained a bubble of poverty in an otherwise affluent part of the Spanish capital. Throughout, the school remained true to its mission of bringing quality education to people of limited means. Now , Alberto Rodriguez de Rivera, the school’s director, is worried about how much longer that will last.

Like most of Spain’s Catholic schools, Padre Piquer is a concertada, a semi-private school. It is owned and operated by the Society of Jesus but receives state funding and is open to all students. It must offer basic education services free of charge. In essence, the school is part of Spain’s public education system.

Twenty-six percent of Spain’s schools are organized as concertadas, and 76 percent of those are Catholic. The concertadas serve a variety of students, many of whom could not afford a private education. Catholic schools account for almost 20 percent of all Spanish schools.

A new law threatens the viability of government-supported Catholic schools in Spain.

“At a concertada you can find the child of a cleaner and the child of a government minister,” said Juan José Tomillo, S.J., the director of the school at Our Lady of Remembrance in Madrid, which serves primary through secondary students. “Even many Muslims attend Catholic schools.”

Now a new law threatens the viability of such government-supported Catholic schools in Spain. Depending on how it is implemented by regional governments, many schools may soon face hard decisions about how to reconstitute themselves so that they can continue to serve their students.

Under the previous education law, passed in 2013 by the center-right Partido Popular, public demand for access to individual schools had been a key factor in assigning students and corresponding funding to schools that receive public money.

But when the center-left Partido Socialista Obrero Español, came into power in 2019, it made the idea of education reform a top priority. On Dec. 23, a measure known popularly as Law Celaá, named after education minister Isabel Celaá, was pushed through parliament by P.S.O.E. and passed by the Senate.

The law has eliminated student demand as a criteria in school funding while prioritizing student access to secular public schools. Many fear the law is intended to phase out privately-owned concertadas like Padre Piquer.

The law suggests government-owned schools will get preferential treatment in planning and funding moving forward. The government will have the power to slowly divert funding from Catholic schools, directing the students who depend on them to secular public school.

“The state will organize the seats,” Father Tomillo said. “And slowly it will make a map and limit the seats in concertadas.”

Though the law sets up one more obstacle to the challenge of sharing the faith in Spain, Catholic schools do not anticipate changing how they teach religion.

Jesús Muñoz de Priego, a lawyer who has frequently represented Catholic schools in Spain, is a spokesperson for Mas Plurales, a grassroots group unting various opponents of Law Celaá. According to Mr. Muñoz de Priego, Catholic schools have historically played a significant role in providing general education because Spain was slow to develop a modern, state-sponsored public education system.

When the Jesuits who started Padre Piquer saw the need for a school in a poor neighborhood with limited infrastructure, the city gave them the land to build the school. A credit union provided financial support and parents paid what tuition they could. Like many other Catholic schools, Padre Piquer continued to receive grants from the government. In 1986, the grant-based system was altered to the concertada structure, essentially a contract between the government and the school to teach a certain number of children.

All Jesuit schools in Spain, today just over 60, are concertadas. Father Tomillo explained that for the Jesuits it was a deliberate choice to continue to offer their schools as a public service. The new structure did not interfere with religious education since public schools in Spain have always offered religious instruction for people of all faiths.

According to Mr. Muñoz de Priego, in regions where the P.S.O.E. governed and small far-left parties like Unidos Podemos had more influence, Catholic schools found that at the renewal of their concertada contracts, municipal governments drastically reduced the number of students that could be allotted to them, despite consistent demand from the public. But after the public demand criteria was established by the 2013 education law, Mr. Muñoz de Priego had little trouble restoring funding and student allotments to Catholic schools through court challenges.

Under the new law, that outcome appears less likely.

At the heart of the conflict over concertadas are competing ideas about the role of the government and the family in education, and the place of religion in Spanish society. The differences in expectations became clear in January 2020 when the regional government of Murcia, where Partido Popular governs, passed a law that required schools to notify parents of the contents of what would be covered in upcoming guest presentations. The law gave parents the opportunity to pull their children out of lectures which offended their beliefs and convictions. Opponents called the law a form of censorship of teachers and a violation of a child’s right to an education.

All Jesuit schools in Spain, today just over 60, are concertadas. Father Tomillo explained that for the Jesuits it was a deliberate choice to continue to offer their schools as a public service.

“We cannot in any way think that children belong to their parents. We are talking about the interest of the child and their constitutional rights,” Ms. Celaá said in opposing the 2019 law. Her interpretation of just how much freedom the Spanish constitution grants parents in choosing which schools their children attend further riled Catholic parents and educators.

“We know that there are ideologies behind the law and sectors that are very interested in taking religion out of school, but we don’t want to get into that,” said Francisco La Moneda Diaz, a lawyer with the National Juridical Commission for Freedom in Education. “Our fight is legal,” he added, “but it has been impossible to establish a legal debate.”

Or any debate at all. The law passed without permitting expert testimony, and the left majority that controls the Spanish parliament rejected all the amendments proposed by right-leaning parties and Mas Plurales. President Pedro Sanchez also ignored the organization’s request for a face-to-face meeting, despite demonstrations against the law that blocked streets in cities throughout Spain last November.

According to Mr. Muñoz de Priego, Law Celaá represents government overreach at the expense of parental rights and the freedom to create different education models as guaranteed by the constitution.

“They don’t have to keep in mind what parents want,” he said. “The government is going to be able monopolize education. The government only has to ensure that there are enough free seats for everyone. They are trying to trick us into thinking that the right to an education can only be assured by public schools.”

“The government is going to be able monopolize education. They are trying to trick us into thinking that the right to an education can only be assured by public schools.”

“We want more different kinds of schools," Mr. Muñoz de Priego said. “In a plural society, there should be a plurality of education models.”

He points out that, unlike other European nations like France, Spain does not profess itself a secular state. Under the constitution the state has the obligation to cooperate with all religions, especially the Catholic Church. Through its concordat with the Holy See, all Spanish schools have to offer a Catholic religion class, though taking the class is optional. A parallel non-confessional class is also offered but most students choose to take religion.

Local priest: The Canary Islands are ‘turning into a prison’ for migrants
Bridget Ryder

Under Law Celaá, religion class will not be counted into students’ grade point average and no parallel non-denominational class need be offered, according to Mr. Muñoz de Priego, transforming religious instruction into an extracurricular subject that will likely be offered outside of regular school hours. To opponents, it is not only a violation of the spirit of the constitution and the agreement with the Holy See but also a solution to a conflict that does not exist.

“Over 3 million students each year take religion voluntarily without any problem. It is not a point of conflict,” Mr. Muñoz de Priego points out.

Though the law sets up one more obstacle to the challenge of sharing the faith, Catholic schools do not anticipate changing how they teach religion. What structural damage the new law may bring for Catholic schools will become more evident as it is implemented by regional governments. Where right-leaning parties are in power, they have promised to mitigate its effects as much as possible. Catholics hope that time and another changing political tide may be on their side.

“We want anyone who is interested in our education program to be able to come,” Father Tomillo said. “We hope politicians come to their senses.” 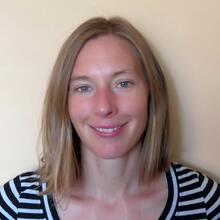