Does it matter if a charity calls itself ‘Catholic’? The church in Montreal faces a question at the heart of its mission 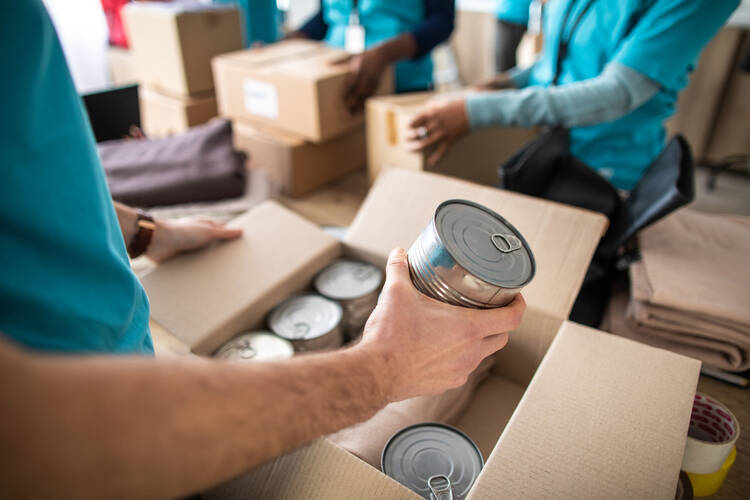 Catholicism can be a tough sell in Quebec, a province that rapidly secularized in the 1960s. People in Quebec, especially those under 35, are the least likely to believe in God among Canadians, according to a 2019 poll from the Association for Canadian Studies. Only 10 percent of respondents said they attend religious services.

The increasing secularization of Canadian society played a role when rebranding Catholic community services. “One of the issues for that agency was that it received funding from a nonprofit foundation that itself was very ambiguous regarding its openness to religion and funding religious organizations,” said Bishop Thomas Dowd, an auxiliary bishop of the Archdiocese of Montreal at the time of the agency’s rebranding. “The question is: ‘Do you change who you are to make sure you keep getting funding? How do you maintain your identity in the face of those kinds of stresses?’”

Catholicism can be a tough sell in Quebec. People in Quebec, especially those under 35, are the least likely to believe in God among Canadians

As the agency chose to change its identity, Bishop Dowd and others insisted there needed to be something new and uniquely Catholic to replace the church’s former social services agency. “The church cannot withdraw from the field of charity,” he said. But the archdiocese did want to avoid recreating the same challenges.

“We realized that part of the issue was actually the conceptual model for providing services, which seems to be: We fundraise and then we use the money to hire some experts to provide care,” said Bishop Dowd, emphasizing that experts are important and such a model of operating can be quite effective. “But,” he added, “my model is different.

“What I would like us to do is, yes, fundraise—but we’ll hire people who are multipliers. The idea is to create a system that is massively engaged with as many people as possible getting involved.”

“The church cannot withdraw from the field of charity,” said Bishop Thomas Dowd. But the archdiocese did want to avoid recreating the same challenges.

The desire for a new kind of church-led social services organization prompted Bishop Dowd and others to create Catholic Action Montreal, a grassroots initiative that began in 2015 to connect people and services across the city. (The name “Catholic Action” is not a revival of the historical movement that grew in the 20th century, though Bishop Dowd affirmed that C.A.M. reflects “the same inspiration and spirit.”)

Anna Graham, a founding member of C.A.M. and chairperson of its board of directors, described the organization as a “means by which we can connect individuals to opportunities to serve the needs of the community.” Its strength is in building relationships, including among the various organizations within Montreal, “learning who they are and what need they serve,” she said. “We provide connections between organizations that respond to a similar need to foster a collaborative relationship, so they can support each other.”

Bishop Dowd offered a unique analogy for the vision behind C.A.M. “The typical client-server model was like Britannica: written by experts, erudite, professional. And there’s nothing wrong with that. But we wanted Wikipedia. The creators of Wikipedia did not actually create an encyclopedia, they created a platform that allowed for massive collaboration. Conceptually, that’s the originality of Catholic Action.”

Catholic Action Montreal is a grassroots initiative that began in 2015 to connect people and services across the city.

C.A.M.’s organic model allows it to be involved in an array of activities based on an evolving mixture of community needs and member capacities. “If people need something, they call,” said Judy Wong, the organization’s executive director, adding that the organization indeed gets a lot of calls.

Over the years, C.A.M. has done everything from taking otherwise isolated seniors on field trips together and providing translations for Montreal’s English-speaking minority to large-scale projects, like retrofitting a monastery to provide temporary housing for asylum seekers. With a list of over 200 members—including lawyers, bus drivers, finance specialists and more—C.A.M. can mobilize a diverse network of contributors eager to share their talents.

In Canada, a new law could mean changing the route of the March for Life
Deborah Gyapong - Catholic News Service

While the coronavirus has changed some of the specifics of C.A.M.’s work, it has redoubled its creativity and enthusiasm. Early on in the pandemic, C.A.M. began to host conference calls, virtual gatherings and online field trips for seniors; invited them to join in pandemic relief efforts by sewing masks; and even stepped in to help other organizations.

When the volunteers at Notre-Dame de la rue, an in-person ministry to homeless people started in 2013 by the Rev. Claude Paradis, could no longer come together to prepare food for those without a home, C.A.M. called up its network to help prepare individually-wrapped sandwiches for distribution on the city’s streets.

While the coronavirus has changed some of the specifics of Catholic Action Montreal’s work, it has redoubled its creativity and enthusiasm.

Ms. Wong continues to connect C.A.M. volunteers to other services where they can put their talents at the service of the community. In a province like Quebec, C.A.M. offers a unique opportunity for Catholics to express their faith through public action. “We’re a group of volunteers that are not afraid to say we are doing this work in the name of our Lord,” said Ms. Wong. “We’re using our gifts to serve our neighbor.” “I’m not a big evangelizer in terms of standing on a street corner,” said Ms. Graham, “but I believe they’ll know who we are by the works that we do.

“That is such a crucial element for me, for our expression of faith. We’re meant to go out there and make a difference.”

Bishop Dowd agrees. “One thing I really can’t stand is when people oppose works of social charity to the care of souls,” he said. “I find that ridiculous.” The Eucharist is at the center of C.A.M.’s activities. The organization’s first project was to establish an ongoing Sunday Mass, with monies raised from collections going to C.A.M.

“We’re a group of volunteers that are not afraid to say we are doing this work in the name of our Lord. We’re using our gifts to serve our neighbor.”

“We are caring for souls by giving them a chance to do works of practical charity,” said Bishop Dowd. “For me, it’s part of my mission as a bishop. My concern has to be for all of our people, I want people to get to heaven.

“If Catholic Action really lives its mission; then there will come a day when people are going to hear the words: ‘I was hungry and you gave me something to eat. I was thirsty and you gave me something to drink. I was naked, sick or in prison...’ People will be able to say that they did these things, thanks to an opportunity of service that Catholic Action provided.”

The organization also reflects a deep ecclesiology. “We don’t use the distinction ‘laity-clergy.’ Those are canonical terms,” said Bishop Dowd. “The distinction we use is ‘baptized-ordained.’” Though an ordained person is no longer a layperson, both are still baptized, and all baptized Catholics have a call to charity. Underlining that common call, said Bishop Dowd, is an attempt “to avoid any kind of creeping clericalism, of the clerics, or of the laity, by showing these concepts overlap. I think it’s an important intuition we sometimes lose.”

The work of Catholic Action Montreal is not exclusive to Catholics. “We’ll serve anybody,”

C.A.M.’s work is not exclusive to Catholics. “We’ll serve anybody,” said Ms. Graham. The organization is a member of the Quebec Community Groups Network, a coalition of English-language non-profits in the province.

In 2019, C.A.M. was selected by the network to receive money from a year-end Christmas breakfast fund in recognition of their work helping seniors. That same year C.A.M. also received an award from the deputy chief of mission at the Afghanistan embassy in Ottawa for their work with the Afghan Women’s Centre of Montreal, one of their close collaborators.

After five years in Canada’s most secular province, C.A.M. has more than doubled its membership, and Bishop Dowd is leaving Montreal. In October 2020, Pope Francis appointed him to serve as the new bishop of the Diocese of Sault Ste. Marie in Ontario, which means he will have to leave his work with C.A.M, an organization that, he said, was his “pride and joy.”