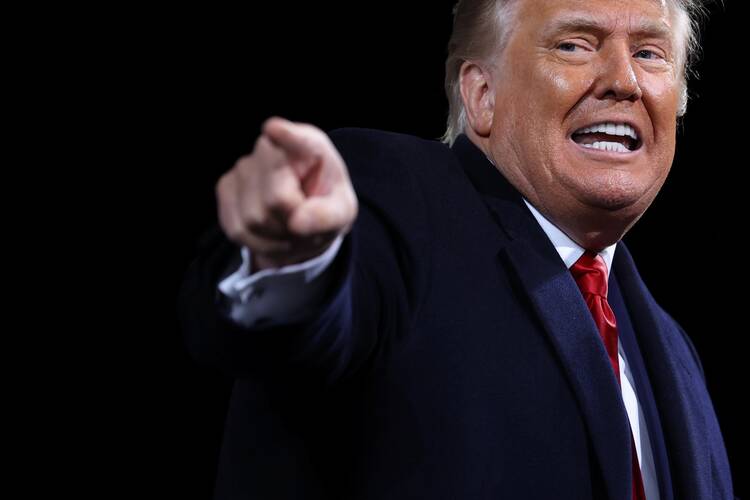 President Donald Trump, campaigning during the Georgia senate runoffs at a rally at Valdosta Regional Airport on Dec. 5, 2020, continued to allege without evidence that the election had been marred by fraud. (CNS photo/Jonathan Ernst, Reuters)

The U.S. Supreme Court, as most legal observers expected, has swiftly disposed of an unprecedented lawsuit filed by Texas attorney general Ken Paxton asking that the court invalidate the votes of tens of millions of Americans in four other states won in the November election by Joseph R. Biden, Jr. In a brief unsigned order, the court said that Texas had “not demonstrated a judicially cognizable interest” in other states’ administration of elections. Prior to the court’s dismissal, a number of other states had filed a brief supporting the suit, as did more than one hundred Republican members of the U.S. House of Representatives. President Donald J. Trump also attempted to join the suit. Even more states and territories filed a brief opposing the suit, both because of the lack of standing for which the high court dismissed it and because it advanced claims of fraud already litigated and thrown out in many other courts.

In September, the editors of America warned that President Trump’s “disregard for the system of laws and customs that establish the necessary conditions for debate, decision-making and public accountability in this republic” posed a unique threat to the American constitutional order. We are saddened but not surprised that Mr. Trump’s inability to accept his clear loss has proven our point repeatedly in the weeks since the election.

We are saddened but not surprised that Mr. Trump’s inability to accept his clear loss has proven our point repeatedly in the weeks since the election.

What is authentically shocking is that so many figures within the Republican Party have abetted Mr. Trump’s outlandish lies about “massive” election fraud, for which no one has provided any coherent evidence, and that they have cooperated with him in filing a swarm of clumsily drafted lawsuits for various courts to swat down over and over again. The country must be grateful for the professionalism and integrity of the judiciary, but its reliability as a backstop—this time—does not erase the danger of these attempts to overturn the will of the voters. Analogously, those sadly few Republican elected officials who have publicly accepted Mr. Biden’s victory likewise deserve praise, but their isolated courage cannot adequately substitute for their party’s near-total captivity to Mr. Trump’s delusional refusal to concede his objective loss.

To make matters worse—and bring them closer to the hearts of Catholics—some of those involved in these affronts against democratic norms are claiming the warrant of the Gospel, both praying for attempts to disenfranchise the populations of entire states to succeed and pretending that they are doing God’s will in supporting Mr. Trump’s assault on the integrity of American elections. That they have likely convinced themselves of the truth of Mr. Trump’s fabrications about the election being “stolen” from him does not reduce their culpability but instead underlines the degree to which their devotion to Mr. Trump has drawn them away from the facts that form the foundation of the truth.

The riches of the Gospel are being diverted into one of Mr. Trump’s bankruptcies.

The danger in such an idolatrous use of the Gospel for nakedly partisan ends is not primarily that it will succeed in overturning the U.S. election. At least at this juncture, the guardrails of the American republic seem to be holding. The danger, rather, is that the association of Christian faith with the corrupt project of installing Mr. Trump in a second term by any means necessary undermines the credibility of the whole church’s efforts to evangelize. The riches of the Gospel are being diverted into one of Mr. Trump’s bankruptcies.

As this editorial is being drafted, Bishop Joseph E. Strickland of Tyler, Tex., is scheduled to speak by video at a rally after a march on Saturday in Washington, D.C., dedicated to “praying for the walls of corruption and election fraud to fall down.” Several other Catholic figures are scheduled to appear as well. Bishop Strickland’s choice to lend episcopal support to this effort brings disrepute upon his office. We hope and pray that his brother bishops may exercise a ministry of fraternal correction by publicly clarifying for the faithful that the American bishops as a whole have not taken sides against the will of the voters in our democracy.

The Supreme Court’s swift disposal of this latest cynical attempt to reverse Mr. Trump’s electoral defeat means that the inauguration of the next president will proceed smoothly and on schedule, as it has throughout our nation’s history. The Supreme Court’s prudence, however, is no replacement for the civic virtue of elected representatives. Voters should remember those who have abandoned such virtue and hold them to account in the next election.