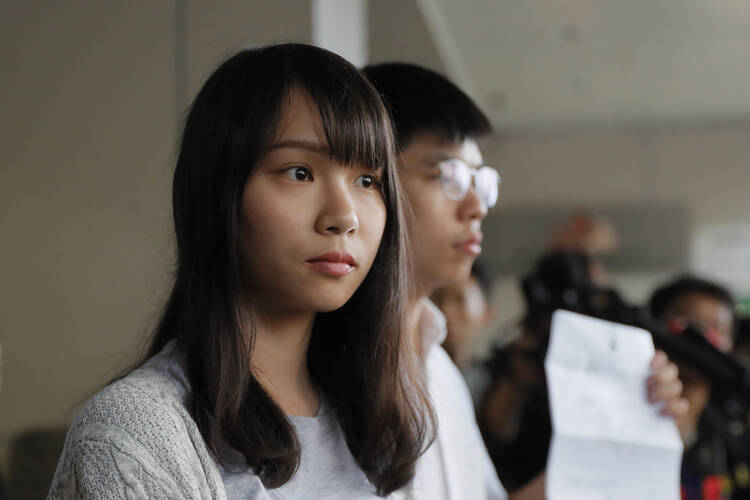 In this Friday, Aug. 30, 2019, photo, pro-democracy activists Joshua Wong, right, and Agnes Chow speak to media outside a district court in Hong Kong. Wong, Chow and activist Ivan Lam have been sentenced to jail on Wednesday, over charges related to an unauthorized anti-government protest last year at the city's police headquarters. (AP Photo/Kin Cheung)

As activist Joshua Wong was being led away from his sentencing hearing to yet another jail cell in Hong Kong, he told followers on Twitter in a message shared by his attorneys: “[I]t’s not the end of the fight. Ahead of us is another challenging battleground. We’re now joining the battle in prison along with many brave protestors, less visible yet essential in the fight for democracy and freedom for HK.”

They were characteristically brave words from Mr. Wong, the public and youthful face of Hong Kong’s pro-democracy movement. At 24, Mr. Wong is already a seasoned veteran of the campaign for political and human rights in Hong Kong. A student leader of the 2014 “Umbrella Revolution” and among the founders of the short-lived political opposition party, Demosistō, Mr. Wong faces a sentence of 13 and a half months, his fourth jail-term because of advocacy for civil freedoms.

His co-defendants this time include Agnes Chow, 24, a Catholic and former Demosisto candidate, who received a 10-month sentence, and Ivan Lam, another former teenage campaigner for democracy, who received seven months. The three will serve out their sentences in Hong Kong, but Mr. Wong faces additional charges under Hong Kong’s national security law, approved in June, that could mean many more months, even years, of jail time at a facility on the mainland. That troubling prospect warrants the attention of the international human rights community, according to Maggie Shum, a research associate at the Keough School of Global Affairs at the University of Notre Dame.

Christians like Wong and Chow have been at the forefront of Hong Kong’s democracy movement. As protests grew in 2019, they were able to rely on the support of many among Hong Kong’s 400,000 Catholics.

Ms. Shum called Mr. Wong a galvanizing symbol for residents of Hong Kong and for those on the mainland who may quietly support the pro-democracy cause. Supporters, some weeping, lined a roadway outside the court to cheer Mr. Wong and Mr. Lam as they were driven away to jail.

In another departing comment on Twitter, Mr. Wong wrote: “The tenacity of HKers continues to give us strength in our sufferings. Please, take your positions, give support to each other.”

“He doesn’t want people to lose hope,” Ms. Shum said. That may be difficult, as Chinese Communist Party authorities continue what has been a year-long clampdown on Hong Kong’s pro-democracy movement. That campaign seeks municipal political reform as it pressures Beijing to honor the Basic Law, a mini-constitution accepted at the territory’s handover to China from the United Kingdom in 1997. It had been intended as a framework for the governance of Hong Kong as an autonomous “special administrative region” until 2047.

Christians like Mr. Wong and Ms. Chow have been at the forefront of Hong Kong’s democracy movement, and as protests grew in 2019 were able to rely on the practical and spiritual support of many among Hong Kong’s 400,000 Catholics, Ms. Shum said. During months of protests last year, the Diocese of Hong Kong had issued statements deploring violence but supporting the right of Hong Kong residents to protest and to seek political reforms. The diocese did not issue a statement following the sentencing this week and has remained silent about the movement in recent months.

In September, Cardinal John Tong Hon, the apostolic administrator of the diocese, addressed the social turmoil and division that has rocked the territory in a pastoral letter, saying, “The public are fully justified in expecting the local government to take action promptly to address their aspirations for justice, democracy and a more decent quality of life.” He noted that “it is fitting to reiterate that the Church gives support to ‘democracy’ as a system of governance.”

Amnesty International: “Once again, the government has used the politically motivated charge of ‘inciting others to protest’ to prosecute people who have merely spoken out and protested peacefully.”

At the same time, perhaps reflecting the divide within the local church between supporters of democratic reform and Catholics seeking stronger ties with the mainland, the cardinal admonished Hong Kong pastors and priests to tread carefully, urging that they should “enlighten the faithful and form their consciences...so that they can adopt a balanced approach and take the right course of action while engaging themselves in social concern activities.” But he added, priests “should not exert their influence in those areas.”

Cardinal Tong Hon has been serving as a temporary administrator of the diocese since the death of Bishop Michael Yeung Ming-cheung in January 2019. Many are keenly awaiting the announcement of his successor for whatever clue it may provide to suggest how both the Hong Kong church and the Vatican intend to handle the delicate relationship between the Catholic Church and Beijing.

The sentences of the three activists were quickly deplored by political leaders and human rights advocates around the world. Amnesty International’s Asia-Pacific Regional Director Yamini Mishra demanded that the convictions be overturned and that the three activists be immediately and unconditionally released.

“Once again, the government has used the politically motivated charge of ‘inciting others to protest’ to prosecute people who have merely spoken out and protested peacefully,” she said. “By targeting well-known activists from Hong Kong’s largely leaderless protest movement, authorities are sending a warning to anyone who dares openly criticize the government that they could be next.”

After months of large-scale protests in 2019 that paralyzed the city, Ms. Shum said it has become increasingly obvious this year that Beijing has adopted the “nuclear option” regarding the Basic Law, preferring to demolish its “one country, two systems” framework regardless of the impact that might have on its global relationships.

It has become increasingly obvious this year that Beijing has adopted the “nuclear option” regarding the Basic Law, preferring to demolish its “one country, two systems” framework.

The punishment meted out to Mr. Wong, Ms. Chow and Mr. Lam, as well as thousands of less well-known demonstrators and activists so far this year, is “just the tip of the iceberg” in terms of the repressive measures adopted by Beijing, Ms. Shum said. She detailed among them efforts to alter Hong Kong’s educational curriculum to include more patriotic instruction, the arrests of media figures—Jimmy Lai, owner of the independent Apple news service was arrested on fraud charges the same day the activists received their sentences—and the blackballing of pro-democracy candidates from Hong Kong’s legislative council.

Ms. Shum believes that the new measures, “right out of the authoritarian playbook,” are intended to send a message to people on the mainland as well as to independence-minded Taiwanese: “I don’t need to send a tank; I can make a political tornado [to thwart democracy] in Hong Kong with all these arrests and the implementation of the national security law.”

The coronavirus pandemic has provided the government welcome cover in the clampdown, she added. “The Hong Kong government has been using the pandemic as the perfect excuse to try to control protests and gatherings on the streets,” she said. “They even used the pandemic as an excuse to postpone [municipal legislative] elections, not for a couple of weeks but for the whole year.”

She expects that the high-profile arrests and sentencing of protesters and activists will force the island’s pro-democracy movement to find more creative ways to “sustain the protests without marching in the streets every week.”

Ms. Shum notes that advocates are already supporting boycotts and “buycotts” of local merchants depending on which side of the debate they landed on in 2019.

Hong Kong residents will find small ways to keep resisting as it becomes harder to speak up for themselves, she speculates, adding that an “international front” may evolve to defend the human rights of people in Hong Kong as it becomes more perilous for them to do so: “The fight in Hong Kong is getting exceedingly risky and costly but at the same time some other doors got opened, at least in the international arena.’

The democratic movement is not dead; it may go deeper underground, but it will continue, she suggests. “We probably won’t see those mass-scale protests anymore, but I think at the grassroots level people in Hong Kong are still trying to defend their civil society.”