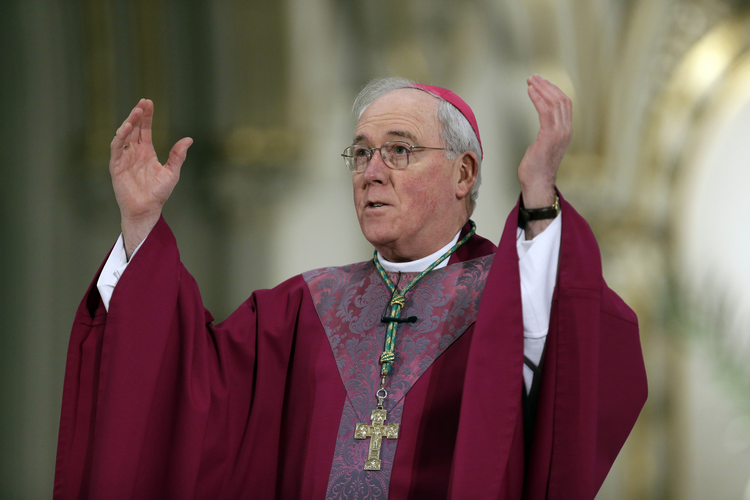 Bishop Richard Malone, of Buffalo, speaks before distributing ashes on Ash Wednesday at St. Joseph Cathedral in Buffalo, N.Y. on Feb. 13, 2013. A civil suit filed Monday, Nov. 23, 2020, by New York Attorney General Letitia James alleges the Roman Catholic Diocese of Buffalo, former Bishop Malone and an auxiliary bishop sheltered and improperly financially supported accused priests by letting them retire or go on medical leave when they should have reported them to the Vatican. (AP Photo/David Duprey)

The lawsuit against the diocese, former Bishop Richard Malone and former Auxiliary Bishop Edward Grosz follows a two-year investigation. It found church leaders sheltered accused priests by letting them step away from ministry rather than follow mandated procedures that would subject them to possible removal from the priesthood by the Vatican.

“For years, the Diocese of Buffalo and its leadership failed to protect children from sexual abuse,” James said in a news release. “Instead, they chose to protect the very priests who were credibly accused of these atrocious acts.”

The diocese has recently acknowledged substantiated allegations of improper sexual conduct against 78 diocesan priests, James said. Of them, more than two dozen — while eventually removed from ministry — were not referred to the Vatican for a trial, according to the civil complaint filed in New York County Supreme Court.

The diocese, in a statement, said it would review the lawsuit before responding.

The Diocese of Buffalo and its leadership failed to protect children from sexual abuse. They chose to protect the very priests who were credibly accused.

“In the meantime, we wish to reiterate that there is zero tolerance for sexual abuse of a minor or of sexual harassment of an adult in the Diocese of Buffalo by any member of the clergy, employee or volunteer," the statement said. "The Diocese has put in place rigorous policies and protocols governing required behavior as well as a code of conduct which all clergy are expected to abide by. Moreover, the Diocese has committed to full cooperation with all civil authorities in both the reporting and investigation of alleged crimes and complaints.”

More than a dozen attorneys general around the country have confirmed investigations or reviews of clergy abuse in the wake of a shocking Pennsylvania grand jury report issued in July 2018. The report asserted that about 300 priests had abused at least 1,000 children in the state over seven decades.

New York’s investigation of the Buffalo diocese began in September 2018, according to James, who said probes into the conduct of other state dioceses are ongoing.

The 218-page complaint filed Monday takes the novel approach of applying New York’s charities statutes to address clergy sexual misconduct. It asks a judge to require the diocese's interim leader, Bishop Edward Scharfenberger, to comply with mandatory policies and procedures and seeks the appointment of an independent compliance auditor.

A survivors’ group said it had been pushing for years for a related motion by James to allow for the disclosure of the accused priests’ names and their alleged conduct.

A.G. James is demonstrating a willingness to do what she can to force disclosures that will prevent future cases of abuse and can lead to justice for survivors.

“We are especially appreciative to A.G. James’ office for finding creative ways to pursue this case," the Survivors Network of those Abused by Priests, said in a statement. "By using her office’s power over non-profit entities, A.G. James is demonstrating a willingness to do what she can to force disclosures that will prevent future cases of abuse and can lead to justice for survivors.”

I forgave my abuser. But I will never forget his abuse.
Mark Joseph Williams

Malone resigned in December 2019 amid mounting calls for his ouster from his staff, priests and public over his handling of allegations of clergy sexual misconduct. Grosz resigned upon reaching the retirement age of 75 in March.

The lawsuit seeks restitution and to bar them from serving in a fiduciary role in any nonprofit or charitable organization in New York state.

The Buffalo diocese — upstate New York's largest with 163 parishes and missions across eight counties — sought bankruptcy protection in February, citing hundreds of lawsuits filed against it since August 2019, when New York’s Child Victims Act suspended the statute of limitations to allow victims of childhood abuse to pursue even decades-old allegations. It reported a $5 million loss in 2019.

“For years, the Diocese of Buffalo has put its own interests and reputation above child protection. We are hopeful that today’s action by the Attorney General will put an end to that for good,” said attorney Steve Boyd who, along with the law firm of Jeff Anderson & Associates, has filed more than 200 lawsuits against the diocese under the New York Child Victims Act.

The diocese expects more than 400 lawsuits in all, spokesperson Greg Tucker said.