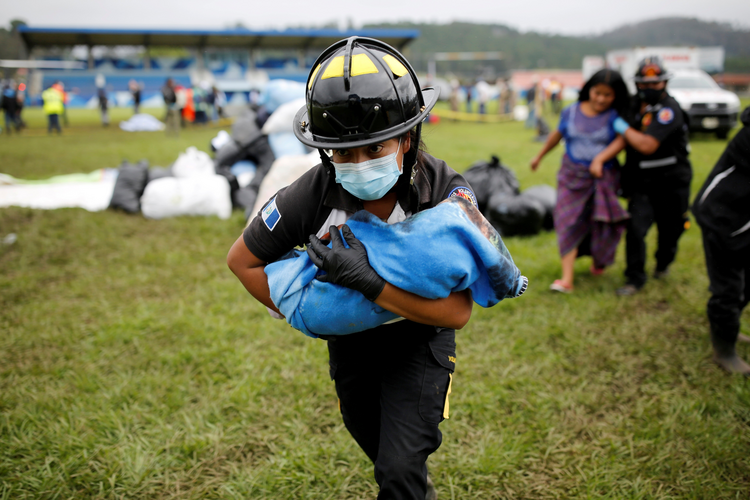 A firefighter carries a baby rescued along with her mother from an area affected by mudslides in San Cristobal Verapaz, Guatemala, Nov. 7, 2020, caused by the remains of Hurricane Eta. (CNS photo/Luis Echeverria, Reuters)

Editor's note: Even as the region digs out, as recounted below, from Eta, Hurricane Iota has intensified into a rare category 5 storm and is expected to make a “catastrophic” landfall on Central America later today. Catholic Relief Services and other agencies are preparing to respond.

Esperanza Pop and her neighbors have been collecting water from a ditch running by their village in northern Guatemala. Their land has been saturated with rainfall since Tropical Storm Eta hit last week, but the 56 Maya Q’eqchi’ families of Chicoyou have no access to water for drinking, washing their clothes and bathing other than the water they can “tap” running by the edge of the road.

Their small communal well was destroyed by the torrential rains. “It all collapsed,” Ms. Pop said, “everything was filled with mud. We have nowhere to go to get water.” The Verapaz Union of Peasant Organizations reported that the majority of the homes in Chicoyou were destroyed.

Eta pounded Guatemala, tearing up roads, bridges and schools and stranding tens of thousands of Guatemalans in emergency shelters. In her community “a few people with kids went to the shelters but most stayed here,” Ms. Pop told America. Although President Alejandro Giammattei insisted that his administration had warned locals, she said no one from the government told the people in her village about the risks of staying.

Eta pounded Guatemala, tearing up roads, bridges and schools and stranding tens of thousands of Guatemalans in emergency shelters.

By Nov. 10, seven days after rains began pouring down, the office of the National Coordinator for Disaster Reduction, known by its Spanish acronym Conred, reported that 44 people were confirmed dead and 99 remained missing.

In Quejá, a Maya Poqomchi’ village southwest of Chicoyou, a search effort was called off after only six bodies were recovered following a mudslide that buried 150 homes. The site was declared a cemetery by authorities.

The Guatemalan Bishops’ Conference issued a statement calling on the government to respond immediately to the crisis and not “hinder” necessary support from affected communities. They noted special concern given the ongoing Covid-19 pandemic and its impact on Guatemalans, and thanked the church’s relief and development agency Caritas for its quick response to those affected.

In neighboring Honduras, massive flooding slammed the north coast. The International Red Cross estimated1.7 million Hondurans had been affected, while UNICEF reported that 1.5 million children alone would be affected by what it called the worst storm in decades. Human rights experts and organizations charged that warnings about the possible impact of Eta came too late. Millions of Hondurans were left unprepared, and thousands were stranded on roof tops for days.

The entire region remains on high alert as Iota, a tropical storm forming in the Carribean is now expected to hit Honduras on Monday. Despite criticism of the official response from both countries, acts of local andinternational solidarity also abounded in response to the storm.

Guatemala’s topography and geography mean its people are acutely vulnerable to multiple natural hazards—earthquakes, volcanic eruptions, tsunamis, landslides, floods, droughts, tropical storms and hurricanes and forest fires. Natural disasters are so frequent and violent here that Guatemala is ranked fourth on a global list of nations most at risk from an extreme natural event.

Their vulnerability is compounded by an acceleration of storm threats because of climate change and historical inequities in land distribution—the poorest live in the most dangerous locations where many are threatened by mudslides. Despite those threats, disaster prevention and response has not been a priority for the government.

Guatemala’s vulnerability to natural disasters is compounded by historical inequities in land distribution—the poorest live in the most dangerous locations.

“Many people live in geologically unstable areas. Communities are not prepared or trained and they don’t have access to information about the phenomenon that will, or could, affect them,” says Luis Solano, a Guatemalan economist and independent journalist living in California.

In 2018, the Fuego Volcano erupted and though Conredhad information early enough to evacuate thousands of people from its slopes, it failed to act in time. Hundreds of people were killed or went missing; entire communities were buried in boiling pyroclastic flows.

More than two years later, last month Sergio García-Cabañas, the former director of Conred was summoned to testify before Guatemala’s Special Prosecutor for Crimes Against Life about his management of the disaster and failure to prevent 198 deaths caused by the volcano eruption. Thousands of people who escaped that deadly eruption continue to live on the slopes of the still-active volcano.

“The recurrence of humanitarian tragedies is not due to natural disasters per se, but of the structural issues that affect millions of people trapped in poverty,” Mr. Solano told America.

Chicoyou sits at 4,330 feet above sea level, just a few miles outside the city of Coban. Many in the community lost their livestock and crops during Eta, while others lost their homes—mostly tin and some wooden shelters erected when the once-displaced community returned to their homelands last January.

“Honestly, there’s a lot of need. Everywhere you look,” said Ms. Pop, a mother of two, in a telephone interview with America. “For clothes, food staples, blankets. There are elders who need support. Kids who are cold.”

“The recurrence of humanitarian tragedies is not due to natural disasters per se, but of the structural issues that affect millions of people trapped in poverty.”

Chicoyou was one of two indigenous Maya Q’eqchi’ communities expelled from their land by the Guatemalan state during the country’s 36-year civil war. They were forced out to make room for a military complex and munitions factory in what is known as Military Zone 21 (ZM21).

ZM21 became the center of military coordination and intelligence, in addition to being a clandestine center for illegal detentions, torture, extrajudicial executions, forced disappearances and sexual assaults. In exhumations carried out on the site between 2012 and 2015, the Forensic Anthropology Foundation of Guatemala found more than 565 bodies in mass graves in what was to be later considered the largest case of forced disappearances in Latin America.

More than 200,000 people were killed during the conflict, largely at the hands of the state. Although the Peace Accords signed in 1996 included provisions to allow the return of indigenous populations displaced during the conflict and reparations for their losses, according to Spanish political scientist and journalist Andres Cabanas, that never happened.

On Jan. 5, 2020, the original inhabitants of Chicoyou returned home. Now, despite the desperate situation they face as a result of Eta, the community remains determined to stay.

“Our biggest struggle is [for] the land,” said Ms. Pop. “Even now with the storm, we are here, firm. We need water now, but we will endure.”

Just a month after they returned, the military petitioned the state to evict the Maya Q’eqchi’ who were living on 14 acres of land in the area. The community has so far managed to stay thanks to court decisions in their favor.

“We are threatened by the soldiers from the munitions factory who [insult us],” said Ms. Pop. “They’re the ones who want to evict us from this land.”

The situation in Chicoyou is not unlike many others in Q’eqchi’ territory, where military and business interests have trumped human rights, leading to internal displacement and forced migration.

Eta landed after political storms had already hit Guatemala. Most recently, on Oct. 15, $15.4 million in cash stuffed in suitcases was confiscated by authorities in a rented house in Antigua, Guatemala, the apparent stash of a member of the executive team of former president Jimmy Morales. Other corruption scandals involving the former minister of the economy and current government functionaries have led to deep mistrust in the state.

Mr. Giammattei, who was sworn in in January 2020, has asked the Guatemalan congress to approve $40,000,000 for Eta victims and has supported the proposal by Mr. Morales’ party, the National Convergence Front to allocate some of that money from the money in October.

Guatemala’s chapter of Transparency International has urged that the details of the management of the disaster be open to public review.

Show Comments ()
Join the conversation: Login or create an account
Before you can comment, you need to update your profile to include your first and last name, as required in our comments policy. Then reload this page and you'll be set up for commenting. Update your profile
More: International / Latin America / Humanitarian Aid