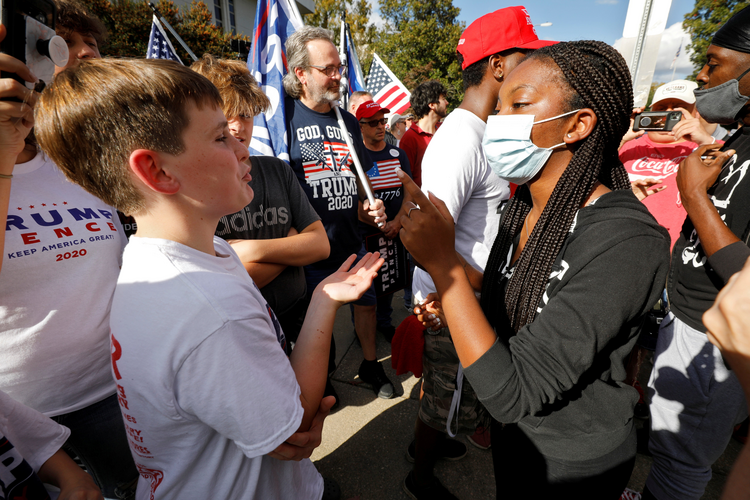 Supporters of President Donald Trump and Democratic presidential nominee Joseph Biden approach each other on a street in Raleigh, N.C., on Nov. 7, after major news media declared that Mr. Biden had won the presidential election. (CNS photo/Jonathan Drake, Reuters)

Do Americans have any appetite for reconciliation after this year’s tense election season? Should they?

During the first week after the election, I interviewed several Catholic thought leaders with these questions in mind. They did not all agree on what our objectives should be, but there was a consensus that any talk of a quick reconciliation is unrealistic. It will be slow, difficult work, and reconciliation may not even be desirable if the cost is too high.

These are not new questions: It is a common trope that the nation must transcend its divisions after a presidential election, that we need to achieve unity in order to face the challenges of the future. President-elect Joseph R. Biden Jr. said in his first speech after being declared the winner: “We are not enemies. We are Americans. This is the time to heal in America.”

But this election felt different for many Americans. The country was divided to the point that few were surprised by reports of family members cutting each other out of their lives. After the results came in, Twitter was awash with suggestions that it is a time of reckoning for supporters of President Trump, not rapprochement.

Twitter was awash with suggestions that it is a time of reckoning for supporters of President Trump, not rapprochement.

David Roberts, a writer for Vox, suggested: “Instead of ‘reaching out,’ why don’t we take this opportunity to make very clear that racism, xenophobia, and authoritarianism are repugnant to a decent society. When someone expresses racism, xenophobia, or authoritarianism in public, they SHOULD face backlash.” U.S. Rep. Alexandria Ocasio-Cortez, a Democrat from New York, was not ready to forgive and forget, tweeting, “Is anyone archiving these Trump sycophants for when they try to downplay or deny their complicity in the future?”

Perhaps Mr. Biden was wrong, and this is not the time for healing.

Stephen P. White, a fellow at the Ethics and Public Policy Center told America, “It’s not going to happen unless people want it to happen.” And many do not.

“Telling the truth should lead to repentance”

True dialogue between groups that have been in conflict usually involves listening with a sympathy that seeks understanding. As the comedian Jeremy McLellan recently tweeted: “The ability to make a positive case for your opponents is important for many reasons. The first is that you will never be able to persuade others unless you know what makes them tick.”

“People do not actually desire evil,” Mr. McLellan told America. “Even the worst people desire the good but [may] do so in a way that is misinformed or disordered.” Referring to political opponents, he said, “It’s always possible to describe their beliefs and goals in positive terms.”

Mr. McLellan holds a deeply Catholic view influenced by Aquinas and Aristotle: People seek the good, or at least what they see as the good. That would presumably include everyone, Trump supporters or Biden supporters.

But what if there is an incompatibility between a perceived good and the actual good? A gap between an apparent good and the true good? In contrast to Mr. McLellan, other Catholics say that closing that gap must be paramount in any conversation about reconciliation.

Mr. Sitman speaks for many when he argues that the Trump administration was not just wrong but sinful, and that Americans who supported it were complicit in that sin. By this theory, reconciliation is a process that begins with the examination of conscience and leads to contrition, confession and penance. Mr. Sitman said: “You have heard the saying, ‘No justice, no peace’? I’d add, ‘No repentance, no reconciliation.’”

By this theory, reconciliation is a process that begins with the examination of conscience and leads to contrition, confession and penance.

This argument underlines a critical issue of the past four years: How much partisan conflict is based upon sincere, good-faith disagreement? How often are partisans telling lies to others, and perhaps even to themselves, to justify their politics?

Mr. McLellan and Mr. Sitman illustrate the tension between two approaches: listening and understanding those with whom we disagree versus judging their positions as right or wrong, good or evil. This tension need not be irresolvable, of course, but partisan and ideological divisions can exacerbate it. After four years of the Trump administration, many have grown weary of calls for dialogue.

Reconciliation as both a process and its outcome

Daniel Philpott, a Notre Dame professor of political science, argues in his 2009 essay “After Intractable Moral Disagreement: The Catholic Roots of an Ethic of Political Reconciliation” that reconciliation is not simply a state of affairs one chooses. As both a “process and a state,” it denotes both the hard, slow work involved in the “restoration of right relationship” and “the condition of right relationship that results from this restoration.” This definition conceives of reconciliation as a process that moves beyond conceptual conversations about how to achieve it toward practical conversations about how to live it out.

This framework might help us identify the conditions in which we can have fruitful dialogue. For Mr. McLellan, the key is putting oneself in the mindset of another. For Mr. Sitman, the key is defining the truth that can lead to repentance on one or both sides of the divide.

Reconciliation can sometimes feel like building a bridge to nowhere when the parties involved do not have the same goal.

Reconciliation can sometimes feel like building a bridge to nowhere when the parties involved do not have the same goal, which can be an intensely frustrating experience. A meaningful dialogue would seem to require an honest acknowledgment about such differences and conversation about what room there is for closing that gap.

Kevin Vallier, a professor of philosophy at Bowling Green and author of the recently published book Trust in a Polarized Age, told me, “Reconciliation requires policies that build social and political trust directly, and not just telling people to be cool to one another.”

Reconciliation as process also underlines who has been left out. Despite record turnout in the 2020 presidential election, there is widespread apathy and disillusionment to match the polarization of those politically active. Any measure of reconciliation will have to take seriously those who have been pushed away from the center: the poor, the marginalized, the discarded.

Keeping the kingdom of God in mind

It can be unclear what the political elite means by words like reconciliation or unity. But Christians know that the aim of reconciliation is peace, the shalom or eirene that instantiates and points toward the kingdom of God. As Mr. Philpott writes, reconciliation fundamentally “restores and promotes the common good,” an effort made possible both by God as author of the covenant with his people and humans as God’s cooperators.

This is a beautiful image of reconciliation. But it also confronts us with some less-than-beautiful realities. If Christians are not oriented toward the kingdom of God, then they will not be able to participate in the work of reconciliation at its most profound levels. And if one discerns that others are not oriented toward the kingdom, perhaps attempts to reconcile with them are impossible or even wrong.

Reconciliation requires a spiritual basis that our throwaway and technocratic culture cannot itself supply.

“Too many of us revel in division,” Mr. White wrote to me. “God loves my fiercest political opponents; do I? If I don’t—or can’t or won’t—that’s my problem. And I need to fix it, because it’s separating me from God.”

In other words, reconciliation requires a spiritual basis that our throwaway and technocratic culture cannot itself supply. As Michael Sean Winters wrote recently at the National Catholic Reporter, “The culture needs to change to make it easier for hearts to change, and the culture will only change when hearts make it change.”

Similarly, Robert Christian of the online journal Millennial told me: “Christians are called to be countercultural in the United States. The throwaway culture is more deeply rooted in our society than we’d perhaps like to believe—and courage is required to consistently promote a politics of solidarity and the common good. But with the election over, there really is no excuse for American Catholics and other Christians to not press those who have won to consistently defend human dignity and promote human flourishing.”

Ultimately, the challenge seems to be that set by Pope Benedict in his encyclical “Caritas in Veritate”: how to resist the “dictatorship of relativism” with an affirmation of truth that is both objective and personal, a truth that both lovingly meets people where they are and calls out of them their deepest desires in the truth.

Anti-Catholicism is real—and it’s turning Catholics against one another
Bill McCormick, S.J.

And if all of this sounds like too much work, perhaps we could return to the status quo. After all, real partisans do not feel the need to reconcile with their enemies. They just focus on defeating them.

But we can be forgiven for hoping against hope.

Show Comments ()
Join the conversation: Login or create an account
Before you can comment, you need to update your profile to include your first and last name, as required in our comments policy. Then reload this page and you'll be set up for commenting. Update your profile
More: Election 2020 / US Politics / Joseph R. Biden Jr.