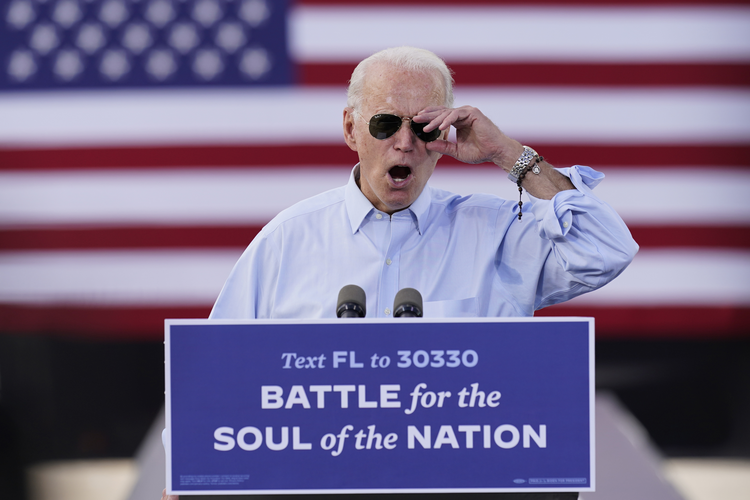 The Associated Press reports that Joseph R. Biden Jr. has been elected the 46th president of the United States. The result is a personal triumph for the former vice president and U.S. senator, who overcame setbacks and family tragedy to gain the prize he had long sought. Mr. Biden is only the second Roman Catholic to win the White House. The fact that Mr. Biden’s faith was a matter of contention mainly among Catholics and was not an impediment to his election is itself a victory for the American experiment and owes much to the pioneering efforts of the previous Catholic candidates, Al Smith and John F. Kennedy.

But the ultimate winner of the 2020 presidential election is the American people, who have countered a unique threat to the constitutional order and rid themselves of someone singularly ill-suited for the office of president. This is a victory for the entire country, and the men and women who won office must now govern for the entire country.

The national Democratic sweep that many predicted has not materialized. Democrats will have fewer seats in the new House of Representatives, while the outcome in the Senate remains uncertain. A clear majority of American voters have given Mr. Biden a mandate: to repair the nation’s social fabric, to bind up the nation’s wounds and to bring us together as one nation. It is not a mandate to legislate a radical new order, pack the U.S. Supreme Court or pursue an extreme pro-abortion agenda. Many Republicans and independents have voted for country over party. Mr. Biden and his Democratic colleagues must govern with that in mind.

The ultimate winner of the 2020 presidential election is the American people.

The last four years have damaged the American system. We are a wounded people, struggling to meet the twin threats of the pandemic and the ensuing economic crisis. No doubt urgent and creative measures are required. But Americans should also step back and take stock. Scripture tells us that “for everything there is a season, a time for every activity under heaven.” President-elect Biden referred to this very Scripture in the final days of his campaign. “The Bible tells us that there is a time to break down and a time to build up—and a time to heal,” he told his supporters in Warm Springs, Ga., last week. “This is that time. God and history have called us to this moment and to this mission.”

In healing the wounds of the body politic, every citizen must play his or her part. In the aftermath of this bitterly contested election, Americans should reach out to their neighbors, not to gloat or commiserate but to recall their common humanity and shared citizenship, remembering, as the late Robert F. Kennedy said, “that those who live with us are our brothers, that they share with us the same short moment of life…. Surely we can learn, at least, to look at those around us as fellow men and surely we can begin to work a little harder to bind up the wounds among us and to become in our hearts brothers and countrymen once again.”

The work of healing is also the work of social justice.

The work of healing is also the work of social justice. Now is the time to heed the command of Isaiah “to undo the heavy burdens and let the oppressed go free”; to reach out to the poor, the elderly, the indigent, the stranger, to all those on the peripheries of our national life. The country’s reckoning with its history of racist oppression must also continue. Yet these efforts must be genuine encounters, however difficult or painful, rather than brute confrontations. Only the former can lead to healing. “Authentic social dialogue,” Pope Francis wrote in “Fratelli Tutti,” “involves the ability to respect the other’s point of view and to admit that it may include legitimate convictions and concerns.”

The nation’s political leaders must meet the challenge, too. While Democrats cannot and should not seize the moment to pursue a radical legislative agenda, Republicans should not resort to their previous strategy of legislative obstruction, opposing everything a Democratic president proposes simply because he proposes it.

The American people deserve leaders as open-minded and willing to work together as they are. “The challenges facing us today,” Pope Francis said in his address to the U.S. Congress in 2015, “call for a renewal of that spirit of cooperation, which has accomplished so much good throughout the history of the United States. The complexity, the gravity and the urgency of these challenges demand that we pool our resources and talents, and resolve to support one another, with respect for our differences and our convictions of conscience.”

Much will depend on the judgment of the president-elect. Mr. Biden: The country needs you to lead. America has spent four years with a leader who governed for only 46 percent of the country. You will oppose some Republicans, surely, but you should appoint some, too. For you must make good on your promise to “be a president for all Americans” and govern, in the words of Abraham Lincoln, “with malice toward none; with charity for all.”

It is a time for greatness.

More Election Stories from America:
– Joe Biden elected 46th President of the United States, second Catholic to ever hold office
– Joe Biden will be the second Catholic president. Here’s what you need to know about his faith.
– Survey: Biden and Trump split the 2020 Catholic vote almost evenly
– Matt Malone, SJ: What Joe Biden could do to heal our divided nation​​​​​

This article also appeared in print, under the headline “A time to heal,” in the December 2020, issue.