Insurgency threatens Mozambique. The church is helping the most vulnerable. 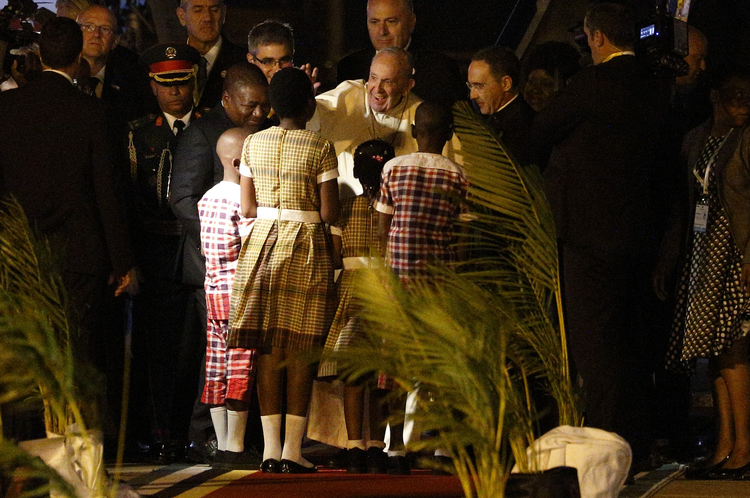 A three-year war between government troops and extremist insurgents has been escalating in recent months in northern Mozambique. The violence has created a humanitarian crisis in this gas- and oil-rich African country—more than 310,000 people have been displaced and around 2,000 people have been killed. Cabo Delgado, one of Mozambique’s poorest provinces, has been largely occupied by jihadists who identify themselves as the new “Islamic State.” The extremists threaten to branch out into Zimbabwe, South Africa and Tanzania.

“This war destabilized not only our region, but all of Mozambique,” said Luiz Fernando Lisboa, C.P., bishop of the Diocese of Pemba, the province’s capital. “The church’s role has been to help victims, going first to the most vulnerable. But we must also speak out,” he told America in an exclusive interview.

Because of his pastoral work and international contacts—mostly in Portugal and Brazil—Bishop Lisboa has been accused of promoting social disorder and has endured death threats. Local media have admonished him for criticizing government authorities and suggested that he should be expelled from the country.

In response, local bishops issued letters of full support to Bishop Lisboa, and Pope Francis called him directly to offer assistance. “His call was extremely helpful to end the defamations,” Bishop Lisboa said. “What we have said is what the church teaches...the defense of the poorest and most vulnerable. The pope told me we should let [the Holy See] know if we need anything.”

“This war destabilized not only our region, but all of Mozambique,” said Luiz Fernando Lisboa, C.P., bishop of the Diocese of Pemba. “The church’s role has been to help victims. But we must also speak out.”

Pope Francis visited Mozambique in 2019, and he is familiar with the many challenges facing the country.

The bishop of Pemba has become a voice in defense of the vulnerable in Mozambique. “Our job is to have the poor people’s back,” he said. “An avalanche of people arrives every day in Pemba and in other districts where the war has not arrived. It now reaches nine districts out of the 17 in the province.”

Besides providing food and shelter, the church trains dozens of pastoral agents and women religious to offer psychological assistance to refugees from the fighting.

The government’s struggle against the jihadists is just the latest violence in a nation burdened with a history of conflict. A brutal civil war followed Mozambique’s independence from Portugal in 1975; fighting continued for years during the 1980s and 1990s between the communist government and a handful of opposing factions.

Mozambique’s two largest political groups emerged from that armed conflict: the Front for the Liberation of Mozambique (Frelimo), currently the dominant political party, and the Mozambican National Resistance (Renamo), its major rival and an anti-communist political party.

Several peace treaties have been signed between the two former bitter foes, the latest one in August 2019 by President Filipe Nyusi, representing Frelimo, and Ossufo Momade, a Renamo leader. But as many small factions are still armed, a complete cessation of violence was never achieved.

Bishop Lisboa: “People started to flee since the beginning of conflicts. Often, the weakest ones, such as the elderly and the children, cannot escape.”

The national government has tried to overcome this decades-long instability, but it lacks the military capacity to contain Islamic extremists in the north.

“We actually have this double war zone in Mozambique. First, in central areas, there is an armed group related to Renamo which does not accept the party’s current leadership,” Bishop Lisboa said. “They have organized guerrillas; they have attacked automobiles, buses; some people have died. The population is very scared in the provinces of Manica and Sofala. This is one side of the war.”

The second war front is against Islamist extremists. They began to raid villages in the gas-rich Cabo Delgado province in 2017. The militants have blocked important roads and occupied a strategic port, Mocimboa da Praia. In 2019, they pledged allegiance to the Islamic State. As it is typical of such groups, they force local populations to submit to their rule and impose their own version of sharia law.

The first half of 2020 saw more attacks by the jihadists than the previous two years. The government has asked for international support; it has even accepted the use of mercenaries. But when neighboring countries offer assistance, concerns over sovereignty are always raised. The crisis threatens to escape Mozambique’s borders. On Oct. 23, Tanzania’s government confirmed the first attack within its territory by Islamic extremists based in Mozambique, according to The Associated Press.

“People started to flee since the beginning of conflicts—first in small villages but later from all villages. Often, the weakest ones, such as the elderly and the children, cannot escape,” said Bishop Lisboa. “They started attacking police posts, remote villages, but now they are attacking towns and provoking a massive exodus towards Pemba, other districts and even outside the province.”

Bishop Lisboa believes that the suffering caused by extreme poverty and rivalries among ethnicities have been exploited by foreign extremists to recruit young Mozambicans into the Islamist movement.

According to Bishop Lisboa, a conflict among Mozambique’s religious communities is not at the root of the violence.

“There are several theories about the reasons behind the war, but in Mozambique we never had problems among religions. We are Catholics, evangelical Christians, Muslims, Hindus, and we have coexisted well. These insurgents entered the country from abroad and, although there are Mozambicans, they are also Tanzanians and other foreigners.”

Two religious sisters were kidnapped by insurgents, only to be released after 24 days. “They were asked to convert [to Islam] and refused, but no harm was done to them,” Bishop Lisboa said. “Even the rebels knew the good work that these sisters performed with the poor, the elders and the children.

“The sisters have a small school and provide [traditional healing] to the people,” the bishop said. The sisters were quickly freed, but the insurgents refused to release the people they had been caring for.

In the midst of so much violence and dislocation, food shortages have become acute, especially among the displaced. The spread of Covid-19—most cases have been in Maputo, the national capital—and the damaged economy are secondary concerns in the northern provinces. Mozambique’s economy is based mostly on agriculture and commodity exports.

Bishop Lisboa believes that the suffering caused by extreme poverty and rivalries among local ethnicities have been exploited by foreign extremists to recruit young Mozambicans into the Islamist movement. Although northern regions are rich in natural and agricultural resources, “past governments have not invested there, so the population feels abandoned,” he explained.

It is common for populations in the north to resent those in the more developed center and south of Mozambique, analysts say. Members of the Makhuwa and Makonde ethnic groups often say that investments and work opportunities always arrive first in the southern provinces of Maputo, Gaza and Inhambane. And even when there are new enterprises in the north, mostly in the gas industry, workers are often brought in from the south.

“The country really lacks reconciliation,” Bishop Lisboa said. “It is difficult to accept the one who is different. When a group sees the other gaining space, they get organized and start fighting…. It greatly hinders any peace process.”

The best ways to help Mozambique, he said, are through prayer and by sending material support. The Portuguese Archdiocese of Braga collects international donations through wire transfers. “We could handle taking care of 300 people, but in order to provide solidarity to 300,000, we need all the help possible,” Bishop Lisboa said.