Pope Francis celebrates the fruits of peace in Mozambique

Pope Francis celebrates the fruits of peace in Mozambique 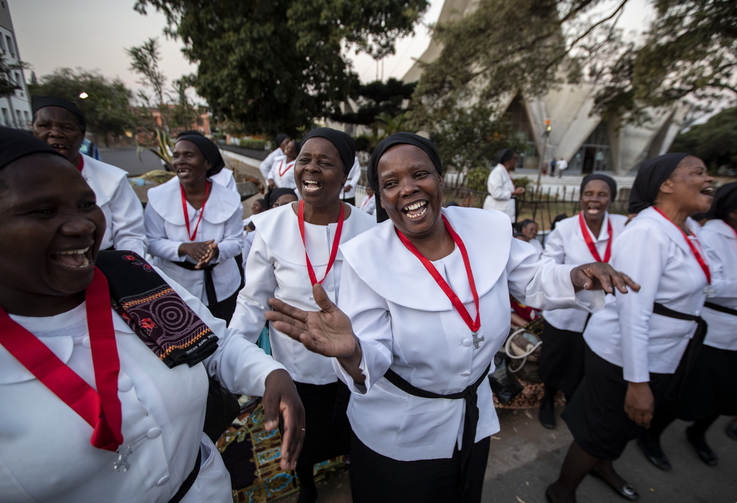 Women from different churches sing as they wait to see Pope Francis, ahead of his arrival at the Apostolic Nunciature in the capital Maputo, Mozambique, on Wednesday, Sept. 4, 2019. Pope Francis is opening a three-nation pilgrimage to southern Africa with a strategic visit to Mozambique, just weeks after the country's ruling party and armed opposition signed a new peace deal and weeks before national elections. (AP Photo/Ben Curtis)

Pope Francis spoke out forcefully in support of the recent peace agreement between the government and the opposition movement in his first major speech in Mozambique on Thursday morning, Sept. 5. He told political and civic leaders, and all citizens in this nation of some 30 million, that he had come “to foster a renewed future of peace and reconciliation.”

Peace was the central theme of his talk, which he delivered in Portuguese to key members of the government and the Renamo opposition movement at the Ponta Vermelha Palace, in the capital city of Maputo. Indeed, the word “peace” appeared no less than 16 times in his speech, and the word “reconciliation” five times.

Francis rode to the presidential palace through streets lined with cheering people. President Felipe Nyusi, 60, who has led this country since 2014, warmly welcomed him at the palace, and the two had a private conversation for 15 minutes.

Mr. Nyusi then delivered a welcoming speech in which he said Mozambicans people were grateful for the visit in the 44th year of the country’s independence. He cited Mozambique’s strong ties with the Holy See and the church’s contributions to education here.

Pope Francis praised “the efforts made in recent decades to ensure that peace is once more the norm and reconciliation the best path to confront the difficulties and challenges that you face as a nation.”

He also said, “As president, I commit myself to care for the poor and, as a priority, I commit myself to the unification of the Mozambican family and to creating an atmosphere of peace.” He informed the pope that the leaders of the Renamo opposition were present ìn the hall and thanked Francis for bringing a message of “hope, reconciliation and peace” to this land.

Speaking after the president, Pope Francis said, “I am happy once more to be in Africa.” He praised “the efforts made in recent decades to ensure that peace is once more the norm and reconciliation the best path to confront the difficulties and challenges that you face as a nation.”

He recalled that it was with that spirit that he and Ossufo Momade, the leader of the Renamo armed movement now turned political opposition, last month signed a peace accord at a Renamo military base, ending years of civil violence and paving the way for elections.

Mr. Momade and other top Renamo leaders were in the hall when the pope spoke. Afterward, President Nyusi introduced Francis to Mr. Momade, and they spoke together for a short time.

In his speech, Pope Francis described the peace accord as “a further courageous step on the path of peace that began with the General Peace Agreement of 1992 in Rome.”

He was referring to an earlier peace accord, facilitated by the Italian government and the Sant’Egidio Community, that brought an end to the bloody civil war (1977 - 1992) between Frelimo, a Marxist-Leninist movement supported by the Soviet Union, and the Renamo movement that had been supported by South Africa and the United States. During that war, one million people were killed and millions more were displaced from their homes.

That agreement led to elections in 1994 which Frelimo won; it has ruled the country ever since. But the new centralized government failed to end sporadic violence by Renamo fighters. The new peace accord opens the door to a more decentralized government and works toward the integration of some 5,000 Renamo rebels into society.

Commenting on both peace accords, Pope Francis said: “How much has happened since the signing of the historic treaty that sealed the peace and has gradually begun to bear fruit! Those first fruits sustain hope and the determination to make your future not one of conflict, but of the acknowledgement that you are all brothers and sisters, sons and daughters of a single land, stewards with a shared destiny.

“You have experienced suffering, sorrow and affliction,” the pope continued, “but you have refused to let human relationships be governed by vengeance or repression or to allow hatred and violence to have the final word.”

Francis said the pursuit of peace “demands that we continue, with determination but without fanaticism, with courage but without exaltation, with tenacity but in an intelligent way, to promote peace and reconciliation, not the violence that brings only destruction.”

Above all, he said, it demands “a tireless commitment…to recognize, protect and concretely restore the dignity, so often overlooked or ignored, of our brothers and sisters, so that they can see themselves as the principal protagonists of the destiny of their nation.” He reminded the government that “without equal opportunities, the different forms of aggression and conflict will find a fertile terrain for growth and eventually explode.”

He encouraged the Mozambique government to improvements in education and health care, and “to ensure that no one feels abandoned, especially the young people.” About half of the country’s population is under the age of 18.

Mozambique is the third largest holder of natural gas reserves in Africa, but in his speech the pope said, “the true wealth of your nation can be found in the service of others, especially the poor.” He emphasized the need “to overcome narrow corporate or partisan interests” to ensure that there are no longer “children and young people without schooling, families that are homeless, unemployed workers, farmers without land to cultivate.”

Francis’s message would provide the country with “a positive boost.” He is bringing “a strong message to the people of unification, of the importance of peace, and of finding a way forward together.”

Aware of the threats to the environment in this part of the world, Francis told his nationwide audience that they all have “a special responsibility” to care for their country and said, “the protection of the land is also the protection of life, which demands particular attention whenever we see a tendency towards pillaging and exfoliation driven by greed.”

He said that “a culture of peace” implies “a productive, sustainable and inclusive development, where all Mozambicans can feel that this land is theirs.”

At the beginning of his speech, Francis expressed his “closeness and solidarity” to those affected in Mozambique by the cyclones Idai and Kenneth earlier this year. He added, “Sadly, I will not be able to go personally to visit you, but I want you to know of my own participation in your anguish and suffering, and the commitment of the Catholic community to respond to this most difficult situation.”

There were more than 400 people present in the hall when the pope spoke, including members of the diplomatic corps and, notably, Ambassador Federico Villegas from the pope’s homeland of Argentina. They had listened to his keynote address in silence but rose to their feet after he finished speaking and gave him a standing ovation.

The United Nations resident coordinator in Mozambique, Myrta Kaulard, was present in the hall and said afterward, “It’s definitely a good day for peace.” Then, referring to the national elections on Oct. 15, she added, “For good elections you need peace. For development you need peace.”

Francis’s message would provide the country with “a positive boost,” Ms. Kaulard said. He is bringing “a strong message to the people of unification, of the importance of peace, and of finding a way forward together.”