Why Pope Francis knows so much about Mozambique 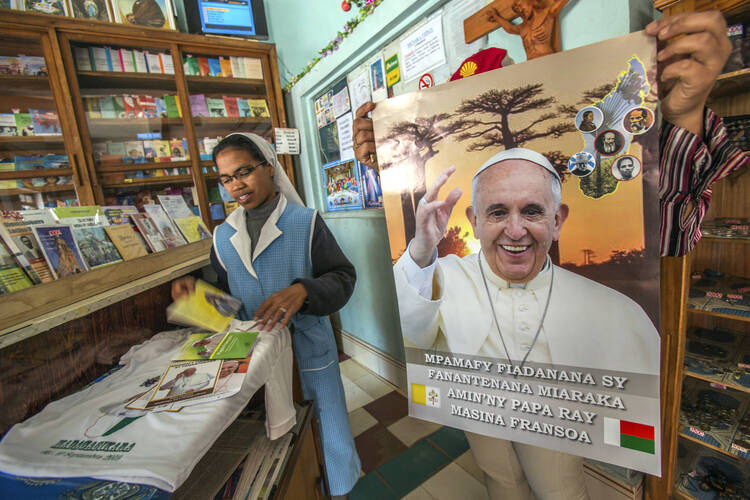 A Catholic sister browses in a store with Pope paraphernalia in Antananarivo, Madagascar, on Sept. 3. (AP Photo/Alexander Joe)

When Pope Francis arrives in Mozambique on Sept. 4 he is going to a country that he already knows much about from his time as archbishop of Buenos Aires, the Rev. Juan Gabriel Arias, 50, told America on the eve of the papal visit.

An Argentinian priest who has worked as a missionary in Mozambique since 2014, Father Arias said that the Archdiocese of Buenos Aires has been sending missionaries to Mozambique since 1982—and Father Arias is one of them. Pope Francis, then Archbishop Jorge Mario Bergoglio, sent him to Mozambique in 2000. That first visit, he stayed for three months. According to Father Arias, one of the pope’s predecessors in Buenos Aires first began the commitment of Argentine priests in response to an appeal from Júlio Duarte Langa, the Mozambican-born bishop of the Diocese of Xai Xai.

When Pope Francis became archbishop of Buenos Aires in 1998, he continued this missionary effort, and over the years he developed a friendship with Bishop Duarte Langa, who led the Xai-Xai diocese from October 1976 to July 2004. Pope Francis made Bishop Duarte Langa a cardinal in 2015, and he will meet the 91-year-old prelate at the nunciature in Maputo on Sept. 5.

The poverty here “is infinitely worse” than in his native Argentina, but the people are “very peaceful.” There is little delinquency and people “feel secure,” Father Arias said.

Father Arias returned to Mozambique in 2014. He reports that Pope Francis has continued to take an interest in Mozambique and the work he is doing. The pope gave him a Jeep in 2015 to enable him to visit his vast parish territory, one that extends across a diversity of terrain, including forest, savannah and desert. “He understands me perfectly,” Father Arias said of the pope. “He’s very pastoral. He’s always on the side of the poor.”

The Argentine priest is content with his life in Mozambique, explaining during a recent visit to Rome that he always wanted to be a “missionary on the periphery.” He had already gained some experience of ministry on the periphery through his work in a Buenos Aires shanty town in his early years as a priest, but when he visited Mozambique for the first time in 2000, “it captured my heart,” he said.

“I wanted to be a missionary in a rural parish, with the poorest people, those most in need.” He realized his dream when he returned in 2014, not long after his archbishop, Cardinal Bergoglio, was elected pope.

Today, “Mufundisi Joao” (Father Juan), as the locals call him, is pastor to an extremely poor rural parish called St. Benedict’s in Mangundze in the Xia-Xia diocese where “there is much hunger when it does not rain, as happened for five years. There is no electricity or gas, and there is high unemployment.”

The poverty here “is infinitely worse” than in his native Argentina, but the people are “very peaceful.” There is little delinquency and people “feel secure,” he said.

The parish territory, located in Mozambique’s Gaza province, extends 55 miles from one end to the other. It has a population of 75,000 people of whom 10,000 are Catholic; he is the only priest and the only white man within the parish. He has divided its territory into 45 different communities, each with its own chapel. The most distant community is a two-and-a-half-hour drive by Jeep.

He said the communities are based on the teachings of the Second Vatican Council; each one elects its leaders from the women and men in the community, consulting with him if necessary. There are more women than men in the church. “I work very much with the lay people; they are most important, also in terms of inculturation of the Gospel,” he said.

He is able to have internet access thanks to solar panels. This has proved invaluable. He has organized many social projects to help the people in his parish, and he needs to be able to contact those who can support the work.

He has been able to get these social projects underway “thanks to help from friends” in Argentina and Spain. University students from Argentina have built 40 chapels for the communities and 85 classrooms for children in his parish. He is a fan of Racing Football club in Buenos Aires and watches his home team by internet. Father Arias still plays soccer with the young people of the parish when he can.

A friend in Spain put him in contact with a charitable foundation sponsored by Lionel Messi, Argentina’s star soccer player. Now the foundation helps provide food every morning for 50,000 children in 40 schools, as well as for three orphanages and for pregnant mothers and those who are feeding children.

He emphasized the fact that about half of the country’s 30.5 million people are under the age of 18 and said there is a great need for education. When food is offered, many more young people come to school. Father Arias is building another primary school in his parish right now.

The Pontifical Foundation Scholas Occurrentes—an effort that began in Buenos Aires that has been supported by Pope Francis since his days as the city’s archbishop—is also helping. So too is a friend from Argentina who brings medical doctors, including surgeons, every year to deal with medical problems that the less-trained local medics cannot resolve.

Although he learned Portuguese, Father Arias discovered that most people in his parish do not speak the colonial language but use two African languages—Shanga and Chopi—so he has begun to learn them. He noted that the Portuguese who colonized the country for over 400 years are still seen by his parishioners as oppressors. He added that the church also had “a bad image” because it has collaborated with the colonizers.

Pope Francis is heading back to Africa. Here’s what we can expect.
Gerard O’Connell

Two years after Mozambique gained its independence in 1975, 1,700 priests and nuns departed as they saw the church was being persecuted and there was no place for them, Father Arias said. But many also stayed to help initiate a renewal of the church in the light of the Second Vatican Council. And church leaders, especially Archbishop Jaime Concalves, the bishop of Beira, contributed to brokering the peace accord that was signed in Rome in 1992.

Despite elections in 1994, Father Arias said political instability has persisted over the years. A new insurgency broke out following the 2014 elections, but by early August a peace agreement had been signed. He said the imminent visit of Pope Francis “was a blessing from heaven; it speeded up the peace process. It gave the parties that ‘extra push’ to sign. If it were not for the pope’s visit the accord might not have yet been signed.”

Various other factors contributed to the peace accord, he said, including the discovery of oil and gas reserves which could help to transform the country if the revenues are used properly. He explained that “a most important element” of the agreement is that Mozambique’s provinces can now elect their own governors. “That’s a great step to peace.”

Another important element is the agreement’s plan to integrate the Renamo forces (about 3,000 soldiers) into the country’s military forces, he said. Apart from the peace accord, he said, “problems” of insurgency in the north of the country continue.

Father Arias would like Pope Francis to come to Gaza province and visit his parish, and he said Francis would like to do so, but it has not been added to the agenda because of logistical reasons. Father Arias personally will not be able to go to Maputo for the pope’s visit because it is very complicated to organize—and expensive—and he could only take a small number of people. He is erecting big screens in his parish for people to follow the papal Mass live via internet streaming since many people do not have television.

Rev. Juan Gabriel Arias is doing fine. May he be blessed with strength and stamina.