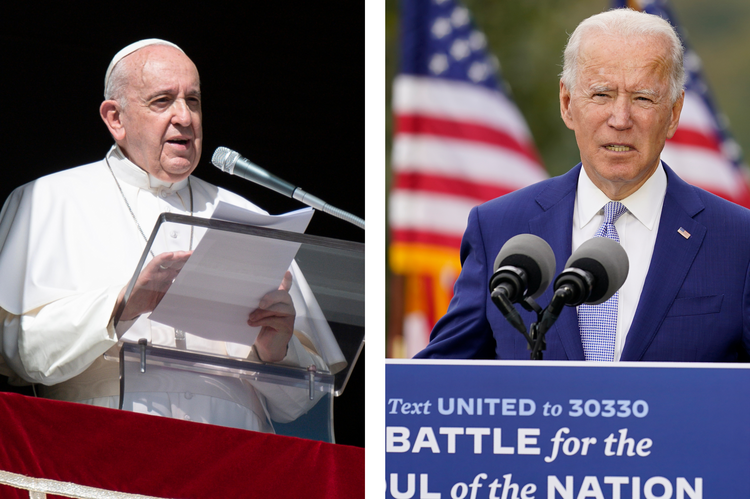 A week out from the U.S. Election, Joe Biden turned to Pope Francis’ latest encyclical for inspiration in a brief address given in Warm Springs, Ga., this afternoon, Oct. 27.

Returning to the banner theme of his campaign, Mr. Biden reminded Americans of what he believed would be the mission of his presidency. “I have talked about the battle for the soul of America, since the very beginning of this campaign,” he said. “I want to be very clear in these closing days about what I mean.”

In his remarks, Mr. Biden criticized the Trump administration’s handling of the pandemic and invited Americans to “clear the decks for action.” He promised that on his very first day as president he would act to “get Covid under control” and deliver an economic plan that will “finally reward work not wealth.” The former vice president said he would also deliver on his promises for better health care and address the systemic racism that beleaguers the United States.

Joe Biden drew from the pope’s remarks about what he called “this phony populism that appeals to the ‘basest and most selfish’ instincts.”

Nearing the end of his remarks, Mr. Biden turned to Pope Francis’ latest encyclical, “Fratelli Tutti,” to answer a question, Mr Biden said, “that anyone who seeks to lead this nation should be able to answer.”

Mr. Biden drew from the pope’s remarks about what he called “this phony populism that appeals to the ‘basest and most selfish’ instincts,” the very kind of populism he sees reflected in Mr. Trump and his administration. The pope repeatedly warned of the threat of populism around the world prior to “Fratelli Tutti,” and the encyclical has further amplified this message.

Mr. Biden repeated Francis’ words from the encyclical about the polarization within the contemporary political sphere, saying: “Politics is something more noble than posturing, marketing and media spin. These sow nothing but division, conflict and a bleak cynicism.”

The former vice president also offered his response to what he saw as Pope Francis’ call to action in “Fratelli Tutti”: “My answer is this: I run to unite this nation and to heal this nation.... The Bible tells us that there is a time to break down and a time to build up—and a time to heal. This is that time. God and history have called us to this moment and to this mission.”

This is not the first time that the former vice president has quoted a pope. On the campaign trail in Pittsburgh this September, Mr. Biden referred to St. John Paul II to warn Americans of the fearmongering that was gaining traction in U.S. politics, especially in the lead-up to elections.

“I believe we’ll be guided by the words of Pope John Paul II, words drawn from the Scriptures,” Mr. Biden said. “Be not afraid. Be not afraid.” He added: “Fear never builds the future, but hope does. And building the future is what America does, what we’ve always done.”

[Read this next: Families hurt by addiction know exactly the pain (and love) Joe Biden feels for his son, Hunter]