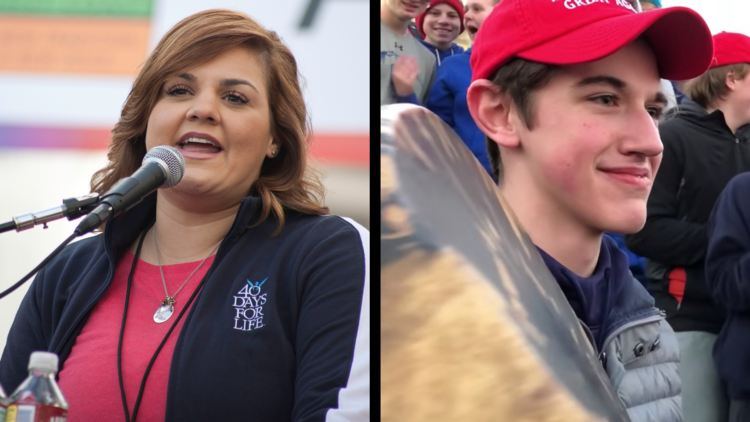 Beginning on Aug. 24, the Republican National Convention will play host to a number of prominent speakers both from the political aisle and from those who have featured prominently in conservative media in recent years. Among those set to speak are anti-abortion activist Abby Johnson and former Covington Catholic High School student Nicholas Sandmann.  Also speaking at the convention is Sister Deirdre Byrne, a surgeon who joined religious life while serving in the U.S. Army.

Ms. Johnson, who previously worked as a director at Planned Parenthood until she left the job in 2009, was formerly an Episcopalian until she became Catholic in 2012. She said that she left Planned Parenthood as a result of having to abort a 13-week old fetus, which led to a pro-life conversion. Later, Ms. Johnson began “And Then There Were None,” a pro-life ministry that lobbies employees at abortion clinics to leave their jobs.

Mr. Sandmann became widely known after a photo of him went viral in January 2019. The incident in question, for which Mr. Sandmann claimed he received biased coverage, transpired at the Lincoln Memorial on Jan. 18, 2019. That day, Mr. Sandmann, wearing a “Make America Great Again” hat, smiled just inches away from Nathan Phillips as Phillips chanted and beat a drum.

The day after that encounter, clips from a video of it went viral almost immediately and showed students surrounding Phillips while appearing to be mocking him. The clip caused immediate outrage, particularly on social media. But by the next day, extended footage of how the situation unfolded revealed that another group had taunted the students and some responded back. Phillips said he had walked over to the students and that group as an intervention.

After the initial video went viral, Mr. Sandmann said in a statement he had “received physical and death threats via social media, as well as hateful insults.”

Mr. Sandmann launched several defamation lawsuits, amounting to a total of $800 million, against The Washington Post, CNN and NBCUniversal. Both the Post and CNN settled with Mr. Sandmann out of court. The suit against NBC is ongoing, with a judge rejecting NBC’s claim to have it dismissed.

Sister Byrne first joined the U.S. Army in 1978 in order to help pay her tuition at Georgetown University. She continued as an army officer until 1989 when, at the rank of colonel, she became a reservist. After a year of service, she did a second residency at Georgetown for seven years, where she became friends with Cardinal James Hickey, the archbishop of Washington. Sister Byrne was also present when Blessed Teresa of Kolkata visited Washington in 1997. This was the same time when she began to feel called to religious life.

Father John A. Hardon, a Jesuit priest, told her that God would not want her to abandon her “gift for medicine” and encouraged her to continue serving as a doctor, though she would continue to do work with Catholic ministries. After helping firefighters and rescue workers during the terrorist attacks on Sept. 11, 2001, Sister Byrne began her religious training but was interrupted by the wars in Iraq and Afghanistan, when she was deployed as an army reservist for six more years.

She retired from the Army in 2009 and, two years later, finalized her vows with the Little Workers of the Sacred Hearts. Since then, she has worked as medical director of the Little Workers’ pro bono Physical Therapy and Eye Clinic and as a surgeon at Catholic Charities Medical Clinic.

Other speakers at the convention include Patricia and Mark McCloskey, a St. Louis couple who gained media prominence, and were later charged by prosecutors, after they were photographed pointing weapons at Black Lives Matter protesters; Andrew Pollack, the parent of a child killed in the Stoneman Douglas High School shooting in 2018; and Alice Marie Johnson, a convicted cocaine trafficker who was pardoned from a life sentence by President Donald Trump on the recommendation of Kim Kardashian.

Cardinal Timothy Dolan is also scheduled to offer a prayer.

The Republican National Convention is set to go from Monday, Aug. 24 to Thursday, Aug. 27, and will be held virtually from a variety of locations.

This article, which includes reporting from Catholic News Service, has been updated.

[Stay up to date with election coverage: Sign up for our daily newsletter]