In Paraguay, church fights ‘hunger we have never experienced before’

In Paraguay, church fights ‘hunger we have never experienced before’ 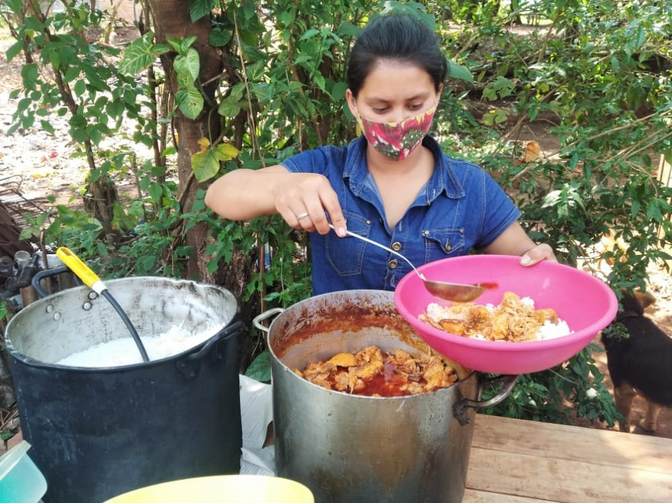 A volunteer wearing a protective mask is pictured in early October preparing one of 300,000 daily meals served to the needy in Paraguay's Ciudad del Este, during the COVID-19 pandemic. With the border with Brazil closed since March, the local diocese has opened 1,300 sites to serve food to those who need help because of the pandemic and economic downturn. (CNS photo/Father Eckar Rolon, courtesy Pastoral Program)

LIMA, Peru (CNS) -- Father Eckar Rolón does not expect his workload to evaporate Oct. 15 when his small landlocked country, Paraguay, reopens its borders with neighboring Argentina and Brazil after seven months.

Father Rolón has coordinated a massive food program in Ciudad del Este, Paraguay's second-largest city, since the coronavirus pandemic hit in March and borders were closed, eliminating jobs and depriving the city of goods. His city, along with Puerto Iguazú in Argentina and Foz do Iguaçu in Brazil, form a zone known as the Triple Frontier that survives on trade, including a huge amount of illegal goods.

Smuggling used to the No. 1 concern along the Triple Frontier, attracting international attention, but pandemic-driven hunger has replaced it.

"Our biggest problem is hunger; we are helping feed people who have watched their livelihoods evaporate with the pandemic," said Father Rolón. "The border will reopen, but it will take time for jobs to follow, and people need to make every cent they have last."

Father Rolón runs the diocesan social ministry, and the lockdown shifted focus from regular programs to organizing 1,300 small soup kitchens, or "common pots," that feed tens of thousands of people daily. There were no family feeding programs in the city prior to the pandemic.

The program receives donations from the government and businesses, and volunteers cook meals. The common pots are in churches, chapels, rec centers and even outdoors, wherever it is most convenient to reach the largest number of people. Families only need to show up with an empty casserole to get a hot meal that often includes chicken and a staple like rice or pasta.

Bishop Wilhelm Steckling of Ciudad del Este said the diocese had outreach programs prior to the pandemic, but they were not designed for widespread need.

"There is real misery. We are seeing a kind of hunger we have never experienced before," he said.

According to data from the state government, 45,000 people have lost their jobs in this city of 300,000 people since the pandemic lockdown began. Thousands of businesses, from mom-and-pop bodegas to large-scale importing businesses, have shut down.

Closing the border has created problems that were generally not talked about in the context of smuggling. Attention focused on illicit goods, with approximately $40 billion moved annually across the Triple Frontier in everything from drugs to sophisticated weapons, according to government statistics. But also crossing illegally into Paraguay from Argentina and Brazil was a long shopping list of food; that also stopped.

In one sting operation earlier this year that targeted public employees allowing merchandise across the border from Brazil, authorities seized 21,200 pounds of sugar, 1,200 pounds of chicken, 1,300 gallons of cooking oil and nearly 30,000 eggs.

Father Rolón said he expected the church food program to last at least another year while the economy gets back on track. The U.N. Economic Commission for Latin America and the Caribbean forecasts a 2.3% decline in Paraguay's economy this year. It is the smallest decline in the region, but still troubling.

Opening the border will help, but it also poses a risk to Paraguay, which has had far fewer coronavirus cases than its neighbors.

Paraguay's mortality rate from the virus is 15.5 deaths per 100,000 people, one of the lowest in South America, according to Johns Hopkins University's daily tracking service. Brazil is at 71.8 per 100,000 people and Argentina at 56.6.