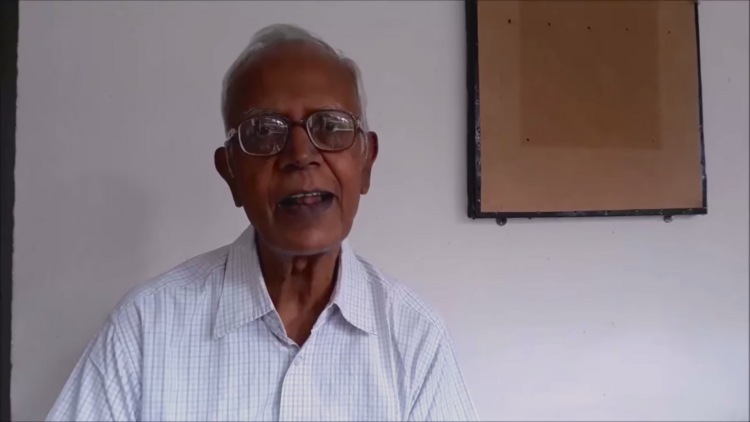 Screenshot of Stan Swamy, S.J., in a message of defiance recorded in anticipation of his arrest by Indian counter-terrorism task force.

The Society of Jesus and the Catholic Church in Ranchi, India, joined by scores of concerned Catholics and human rights activists worldwide, are calling for the immediate release of Stan Swamy, S.J. Father Swamy was arrested on Oct. 8, in Ranchi, India, by India’s National Investigation Agency, a counter-terrorism service. Father Swamy was charged under the Unlawful Activities (Prevention) Act because of alleged links to Maoist rebels and terrorist groups. He denies the allegations.

“What is happening is not unique,” Father Swamy said in a video recorded days before in anticipation of his arrest. “We’re all aware of how prominent intellectuals, lawyers, writers, poets, activists, student leaders, they’re all put into jail because they’ve expressed their dissent or raised questions about the ruling powers of India.”

The Society of Jesus and the local church in Ranchi, India are calling for the immediate release of Stan Swamy, S.J.

Father Swamy, who is 83 years old and believed to suffer from Parkinson’s disease, was arrested at 8 p.m. at Bagaicha, the Jesuit social action center near Ranchi, where he lives and works. He was interrogated and held at the National Investigation Agency’s local offices then taken on the morning of Oct. 9 to N.I.A offices in Mumbai, the capital of the state of Maharashtra, where officials say he will be held until at least Oct. 23.

“We are distressed and troubled in the way and manner in which Father Stan Swamy was arrested,” the Catholic Church in Ranchi said in a statement. “It brings no glory to the name of the premier national investigating agency, that they could not find time in the daylight to take Father Stan Swamy and could reach his residence only after darkness has fallen.”

The arrest is not the first time that Father Swamy has been questioned by the agency. He was interrogated on several occasions by the country’s investigations agency in July and August. On at least two occasions last year, the police also raided his home and seized his property over similar allegations.

“What is happening is not unique,” Father Swamy said. “We’re all aware of how prominent intellectuals, lawyers, writers, poets, activists, student leaders, they’re all put into jail because they’ve raised questions about the ruling powers of India.”

Secretary-General Archbishop Felix Machado defended Father Swamy as someone who had “spent a major portion of his life giving yeoman service to the [tribal communities] and the downtrodden in the state of Jharkhand.”

According to the Union of Catholic Asian News service, N.I.A. officials claim that their investigations have established that Father Swamy was actively involved in Maoist rebel activities. Father Swamy and church officials have consistently denied those charges, maintaining that they are fabricated to silence the priest, who has worked for tribal people’s rights.

“Father Stan has for decades been working to protect the rights of the Adivasis [India’s indigenous people], especially their land rights,” Archbishop Felix Machado said. “This could have worked against the interests of certain people.” The archbishop argued that Father Swamy’s arrest is of particular concern given the priest’s advanced age, poor health and his vulnerability to the coronavirus. Reports of Covid-19 in India have escalated dramatically in recent days.

In a statement released on Oct. 10 in Rome, the Social Justice and Ecology Secretariat of the Society of Jesus demanded the immediate release of Father Swamy and 15 other activists arrested under similar charges. “We, as Jesuits involved in works of education, caring and defending the rights of the poor and the vulnerable all over the world, stand in solidarity with Stan and other human rights defenders in India and strongly condemn the arrest of Father Stan Swamy.”

Social activists and rights organizations worldwide, along with some ministers and politicians within the Indian government, have similarly condemned the arrests. Hundreds took to India’s streets on Oct. 10 in protest, and social media is flush with demands for their release. But so far Father Swamy remains in custody along with the other 15 accused.

“I am ready, and I hope all those who know me and who are concerned about me will also be ready, to face what is to be faced,” Father Swamy said at the end of his message. “In a way, I’m happy to be a part of this because I’m not a silent spectator. I’m part of the game and ready to pay the price whatever be it.”