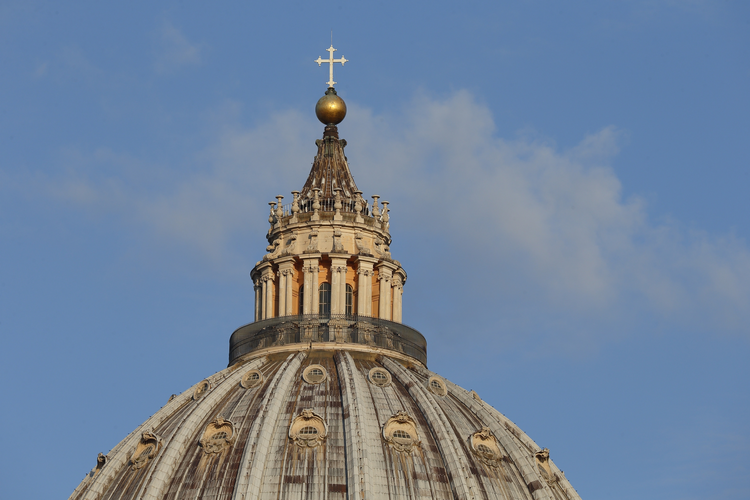 The dome of St. Peter's Basilica is pictured at the Vatican. (CNS photo/Paul Haring)

VATICAN CITY (CNS) -- Two priests connected to a minor seminary located at the Vatican will appear before a Vatican criminal court Oct. 14 on charges related to the alleged sexual abuse of students at the seminary.

Father Gabriele Martinelli faces charges of sexually abusing younger boys when he was a seminarian at the St. Pius X Pre-Seminary. Father Enrico Radice, former rector of the seminary, is accused of aiding and abetting the abuse.

The two were indicted in late 2019 following an investigation that began in November 2017.

Since the alleged abuse was said to have occurred prior to 2012, the Vatican had said a year ago, the court's request to indict the two priests required the personal intervention of Pope Francis because at the time the crimes allegedly occurred, Vatican law required the victim himself to make the accusation within one year of the crime's occurrence.

The pre-seminary is run by the Diocese of Como, Italy, but located inside the Vatican. Boys in middle school and high school live there, serve Mass at St. Peter's Basilica and attend a Catholic school in Rome while considering applying to a seminary when they are older.

Reports of abuse at the pre-seminary began circulating in 2013 and were investigated by staff and the Diocese of Como, the Vatican had said in 2018 when it opened its own criminal investigation following media reports and a book that repeated the allegations.

Explainer: What the church has done to fight clergy sex abuse since 2018’s ‘summer of shame’
Colleen Dulle

In his book, "Original Sin," the Italian journalist Gianluigi Nuzzi, whose books based on leaked Vatican documents were at the heart of two other Vatican trials, had written about one student sexually abusing another at the seminary.

The Italian television program "Le Iene" followed up with a program featuring an interview with a young Polish man, identified only as 21-year-old Kamil, who said he arrived at the pre-seminary at age 13, wanting to be an altar server for the pope. He said he was thinking only vaguely of becoming a priest one day.

Kamil claimed another student, one given responsibility by the rector for determining the liturgical roles of all the students at papal Masses, regularly sexually abused his roommate.

Kamil said the older student would come into their room at night, get into bed with his roommate and abuse him. The alleged abuser was ordained to the priesthood in June 2017, "Le Iene" reported.

Father Martinelli, 29, now a priest of the Diocese of Como, allegedly is the older seminarian. Italian authorities have been conducting their own investigation of him.