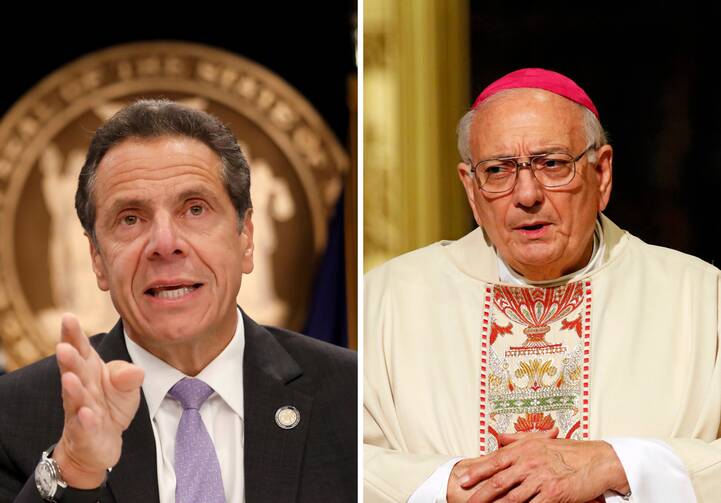 The Diocese of Brooklyn filed a federal lawsuit against the state of New York a day after Gov. Andrew M. Cuomo imposed stricter restrictions on places of worship in hotspot Covid-19 neighborhoods.

In a press statement released on Oct. 8, the diocese said that the decision to restrict attendance at Mass to as few as 10 people in the worst-affected zip codes is a violation of the First Amendment right to the free exercise of religion.

“The executive orders this week have left us with no other option than to go to court,” said Bishop Nicholas DiMarzio of Brooklyn. “The state has completely disregarded the fact that our safety protocols have worked and it is an insult to once again penalize all those who have made the safe return to church work.”

“We vehemently disagree with the capacity limits being placed on us; they are disrespectful to Catholics who have only been abiding by the rules,” he said.

Bishop DiMarzio: “We vehemently disagree with the capacity limits being placed on us; they are disrespectful to Catholics who have only been abiding by the rules.”

The governor’s decision to impose tighter restrictions on places of worship and shut down some schools comes as New York is experiencing a rise in coronavirus infections in certain parts of the city. While the statewide infection rate is down to 1.26 percent, in zones deemed “hotspots” as much as 5.8 percent of the population has tested positive for Covid-19, Mr. Cuomo reported at a press conference on Oct. 8. His remarks followed large-scale protests this week against shutdown measures among members of Brooklyn’s Orthodox Jewish community.

In its press statement, the diocese argued that after Catholics were prohibited from attending Mass in person for 16 weeks because of Covid-19, the church had gone to great lengths and expense to ensure that its parishes and schools complied with city and state mandates.

“The diocese worked with former New York City Office of Emergency Management Commissioner Joseph Esposito to develop a safe reopening plan for all churches to keep the faithful safe from the effects of the virus,” the statement said. In its lawsuit, the diocese further criticized the governor’s order, arguing that maintaining social distancing was not at issue since most of the churches in the high infection zones could hold at least 750 people. “The initiative [to impose restrictions] forces even the very smallest of these churches, operating safely at 25 percent capacity, to cut its occupancy by 80 percent.”

In an interview with Currents News, a Catholic cable news program in Brooklyn, Bishop DiMarzio defended the diocese’s decision to take legal action. “We still can be a safe harbor [for] people to worship,” he said, “without adding to the infection rates in these particular areas.”

Randy Mastro, the Manhattan attorney representing the Brooklyn diocese, told Currents News that “the diocese has gotten it right,” noting its thorough adherence to state protocols. “So there is absolutely no basis, no legitimate reason, for imposing stricter requirements on the Roman Catholic churches in particular what the governor calls hot zones,” he said. “It’s not happening in the diocese’s parishes. It’s happening in other communities.“

Bishop DiMarzio: “We still can be a safe harbor [for] people to worship without adding to the infection rates in these particular areas.”

In his press conference, Mr. Cuomo did make an emphatic appeal to the borough’s Jewish community, reminding them of his fondness and respect for the Jewish people and describing what he believed was at stake for everyone if religious communities failed to comply with the state’s orders.

“In Jewish teaching, one of the most precious principles is saving a life,” the governor said. “The Torah speaks about how certain religious obligations can be excused if you are going to save a life. This is about saving a life.”

Despite the governor’s insistence that the measures are necessary for the safety of the community at large, some priests and parishioners in the diocese of Brooklyn believe the measures infringe upon their right to freely practice their religion and too broadly target religious communities.

Peter D. Gillen, K.C.H.S, pastor at St. Brendan Catholic Church, in one of the affected neighborhoods, made a strong appeal for the restrictions to be rescinded on his parish’s Facebook page.

“It's time to let the Governor and Mayor know how strongly we object to the proposed limitations on churches,” he wrote. “We are essential to the spiritual and emotional health of our people and important to the health and balance of civil society. WE have followed all the protocols and regulations imposed during the time of the virus. Is there no recognition of our cooperation? Call the governors office and the mayor as well... Keep 311 busy!”

The Archdiocese of New York issued a note of support to its neighboring diocese. According to an archdiocesan statement released on Oct. 8, Catholic parishes throughout New York have been able to mitigate the spread of the virus through “careful planning” and “strict adherence to safety guidelines.”

“So, it is unfair to arbitrarily close, even temporarily, churches which have been operating without a spike in coronavirus cases simply because other institutions have not yet been able to do so.”

The diocese hopes that the courts will grant it a temporary restraining order allowing churches to stay open even at the reduced capacity imposed by pandemic restrictions. Some fear that it could take weeks for the court to hear the case if an injunction is not granted, especially as the presidential election draws closer.

“Everything changes by the minute,” said one parish secretary who asked to remain anonymous because she had not been authorized to speak. She told America that she had been fielding calls all week from parishioners who wanted to know if they would be able to attend Mass this weekend. “People have called and they don’t sound too happy,” she said.

Her parish is located in a red zone, so attendance at each Mass will be limited to 10 people this weekend if the diocese cannot stay the state’s executive order. “It’s like a shock when you go to Mass and you’re not able to [get in],” she said. “It’s just a waiting game, I guess.”