Jesuits ask California Gov. Newsom to give hospitality workers the right to return to work 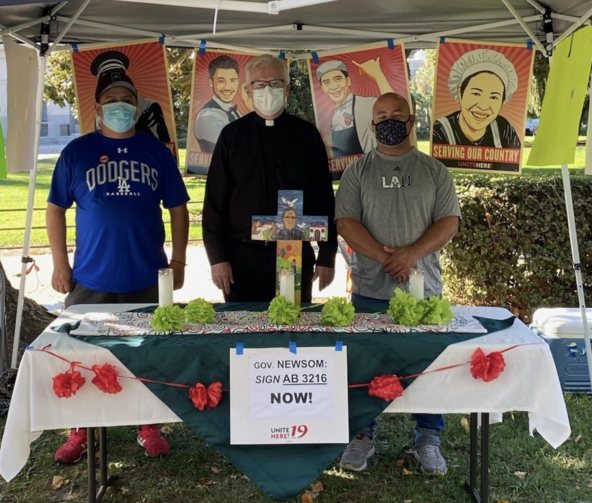 Frank Santos worked as a chef at a banquet kitchen in Los Angeles for seven years before his employer fired all of its approximately 1,000 employees when the coronavirus lockdown began in California. On Sept. 22, he was in Sacramento with Unite Here Local 11, calling for Gov. Gavin Newsom to sign AB 3216 into law. The bill promises dismissed workers a right of recall and retention for hospitality workers who have been affected by Covid-19. After layoffs and terminations in March, workers have been left with no guarantee that they can return to jobs many have had for decades.

In Sacramento, Unite Here Local 11, the L.A. chapter of an international labor union that supports over 30,000 hospitality workers in Southern California and Arizona, led a caravan to the capitol to meet with Mr. Newsom and present him with a letter asking for his support. The workers plan to hold vigil until the governor meets with them or signs AB 3216 into law.

Mr. Santos said that he has struggled to obtain necessary medications since he was fired. His future is uncertain. “I’m 62 years old,” he said. “What can I do now? How can I finish my working time before retirement?”

According to the Jesuit statement, both health disparities and the economic devastation of the pandemic have uniquely affected lower-income workers, people of color and immigrant people.

Like many others, Mr. Santos suspects the motives of companies that quickly fired employees with no guarantee of return when the crisis hit. “Some companies, we think, are using this to get people out of work, so then they can [replace them with] cheap labor,” he said. The resort where he previously worked recently reopened and brought some employees back, those with the least seniority and lowest wages. AB 3216 would mitigate problems like this one.

Even as Mr. Santos shares his story, he is keenly aware of the many others who are struggling because of the pandemic and job loss. “It’s a really, really bad situation that I have, and it’s the same situation that a lot of people I know have,” he said.

On Sept. 24, over 50 members of the Jesuits West province released a letter calling for Mr. Newsom to sign AB 3216. The bill has already been passed by California state senators and assembly members.

According to the Jesuit statement, both health disparities and the economic devastation of the pandemic have uniquely affected lower-income workers, people of color and immigrant people. The letter also argues that the hospitality workers from these communities “were the most vulnerable and the first to be laid off because they labor in the places where Covid spreads most easily.”

“It’s a letter that says what I think needs to be said right now: The folks with power shouldn’t be taking advantage of the folks who are suffering in this pandemic,” Father Busse said.

Brendan Busse, S.J., an associate pastor at Dolores Mission Church in Los Angeles, signed the province’s letter to support his own parishioners and workers like them. When he heard that parishioners from another Jesuit parish, Blessed Sacrament in Hollywood, were working with Unite Here Local 11, he wanted to find ways that he and his Jesuit brothers could help.

Early in the pandemic, his parish planned a livestream Mass to lift the workers up in prayer. He said it was a “no-brainer” when he was asked if he and other Jesuits would want to sign the letter in support.

“It’s a letter that says what I think needs to be said right now: The folks with power shouldn’t be taking advantage of the folks who are suffering in this pandemic,” Father Busse said. He explained that the workers’ loss of their jobs with no guarantee of a return to work relieves employers of any contractual obligation to recognize workers’ rights.

“This bill is a reminder that workers have a right to work but also have a right to advocate.” Without the governor’s support, workers who are organizing and advocating for their rights might be punished by their employers and not hired back.

Sergio Sorza, advocating with Unite Here alongside Mr. Santos, believes the law could help many thousands of workers across the state, not just hospitality workers in Los Angeles. He is grateful for the support they are receiving from across the state of California, including from the Jesuit community, some of whom joined the workers at the Capitol on Thursday.

Mr. Newsom is an alumnus of Santa Clara University, a Jesuit university in California, and “is familiar with Jesuit parishes and Jesuit works,” Father Busse said. “I hope that our voice might add credibility to this call to take a moral stand.”

While it is exciting for him to be part of such a movement and to see the widespread and diverse support, Mr. Sorza wishes that a gathering of this kind were not necessary. “The fact that we’re resorting to doing this in the first place is really telling of the governor’s intentions,” he said. “AB 3216 has been at his desk for quite some time, and we definitely want our message to be heard and we want him to take this very seriously.”

While the governor has been quiet about the issue, one of his staffers did come out to receive the letter from Unite Here on Sept. 22. The media attention and mounting support from community members have made Mr. Sorza more optimistic about the possibility of action from Mr. Newsom. “We know it’s getting to the governor’s ears. We know he knows we’re here,” he said. “We want to give him every opportunity to come out here and see us. We will continue to be here from 9 until 5 every day until he signs the bill.”

Mr. Newsom is an alumnus of Santa Clara University, a Jesuit university in California, and “is familiar with Jesuit parishes and Jesuit works,” Father Busse said. “I hope that our voice might add credibility to this call to take a moral stand.”

@MollyKCahill
Provide feedback on this article
Join the conversation: Login or create an account
Before you can comment, you need to update your profile to include your first and last name, as required in our comments policy. Then reload this page and you'll be set up for commenting. Update your profile