Voting Catholic: Is religious liberty in jeopardy in America? 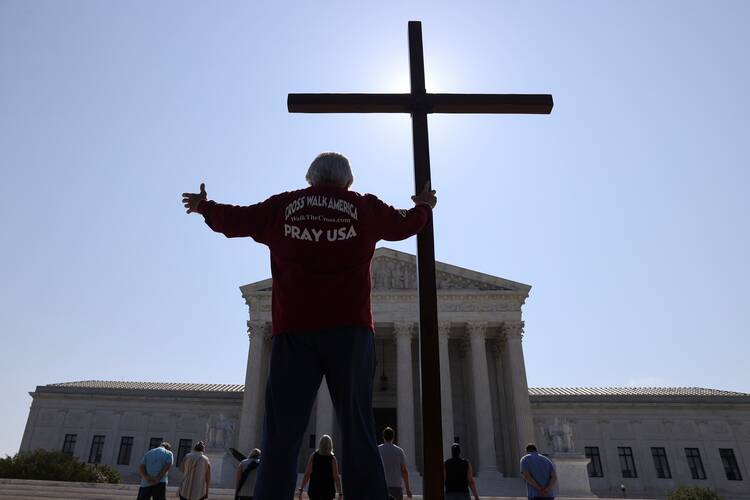 A demonstrator in Washington holds a large cross outside the Supreme Court July 8, 2020.

George Weigel believes in the importance of religious liberty. He also believes that protecting it is—or should be—a matter of serious public concern right now.

On Voting Catholic, he shares his thoughts on the issue with host Sebastian Gomes. “This is an ongoing negotiation in any democracy, and we’ve seen it argued in very often contentious ways during this pandemic,” he said.

Mr. Weigel, distinguished senior fellow at the Ethics and Public Policy Center in Washington, is certain that one U.S. political party does perceive religious liberty as an essential priority: “Unfortunately, the 2020 Democratic platform is a real threat to religious freedom,” he said.

“It threatens to rinse out religious freedom and reduce it to a question of personal lifestyle choice rather than...a matter that protects professionals, for example, doctors, nurses, other healthcare providers, from being required by law to perform actions that they deem gravely immoral.”

Debates over religious liberty issues are not rhetorical to Melissa Buck. The adoptive mother of five children, she and her family live in central Michigan. She says there is an enormous need for foster families in her area. She and her husband worked with St. Vincent Catholic Charities to manage the adoptions of their children. The agency has continued to provide her family with support, counseling and other resources.

George Weigel warns that the 2020 Democratic platform “threatens to rinse out religious freedom and reduce it to a question of personal lifestyle choice.”

When the American Civil Liberties Union filed a lawsuit against the state of Michigan because it worked with faith-based agencies, Ms. Buck was determined to come to St. Vincent’s aid. “When I heard that they were looking to have St Vincent’s license with the state revoked or to have them close their doors, I just could not let that happen, knowing the amount of great work they do in our area,” she said. And “not just with foster care and adoption, but also with immigration services, with counseling, with minorities.”

Because of its Catholic ethos, St. Vincent follows church guidelines on marriage and family. As such, it does not sponsor adoption services for same-sex couples.

As Ms. Buck explained, “St. Vincent is an arm of the Catholic Church. They are faith-based; it's who they are. The government came in and told them that they have to give up a certain aspect of their religious beliefs in order to still be able to provide services. It’s just something that you can’t really tell a faith-based organization, what their faith is supposed to look like in order for them to work.”

Mr. Weigel supports the right of Catholic social service agencies like St. Vincent’s to work in the civic sphere with government’s support: “I think the Catholic agency is entirely within its rights to say that we will place children in family situations which hundreds of years of human experience has taught us are best for the children. And if L.G.B.T. people wish to contest that at law, I don’t think they’re really fighting about children. I think they’re fighting to compel the Catholic Church to adapt its teaching on the morality of human love to their views.”

“Regardless of the outcome of an election, the one thing I know is that child welfare is still going to be going through a crisis, no matter who wins. We’re still going to have kids in need of homes…and loving families,” Ms. Buck said.

Mr. Weigel asks voters to remember “you’re not just electing an individual; you’re electing a platform; you’re electing somebody who’s part of the party. All of this needs to be weighed in conscience and then a prudential decision rendered.”

To learn more about Ms. Buck’s effort to support St. Vincent Catholic Charities and the foundations of religious liberty in the United States, be sure to listen to Voting Catholic, a new podcast by America Media that helps Catholics discern how to vote in the 2020 presidential election.