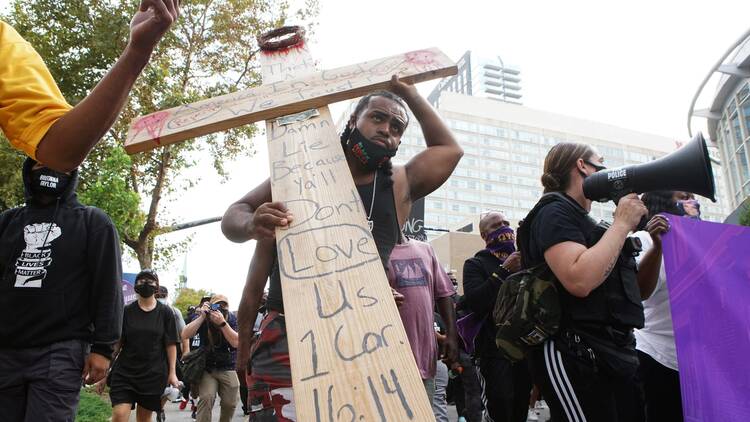 Demonstrators in Louisville, Ky., march for Breonna Taylor Sept. 25, 2020. A grand jury handed down an indictment Sept. 23 for one of three police officers involved in the fatal shooting of Taylor. The police officer was indicted on three counts of wanton endangerment in the first degree. (CNS photo/Lawrence Bryant, Reuters)

Andrew Lyke has had a lot of experience with diversity lectures in the corporate world.

“[They were] really surface-y,” he told Sebastian Gomes, America’s executive editor and the host of its new podcast Voting Catholic. “It wasn’t something that ran deep and I really wasn’t interested in anything that was just going to be people talking about racism or having some persons of color there, exploiting their story.”

Mr. Lyke did not want white people to just get a “nice, teary experience” during those encounters only to walk away and ultimately learn nothing about systemic racism. That is partly why since 2011 he has served as director of the Office for Black Catholics for the Archdiocese of Chicago.

“Shortly after [my wife] and I married, we moved from South Side, Chicago to the western suburban area of Chicago,” he said. “We were among very few African Americans who lived in the area.” He explained that often even with “white friends we’re very close to, there’s a hypersensitivity to making sure they’re seen as not racist” but not much eagerness to do more, a phenomenon that typifies white people’s complacency about racism in the United States.

Mr. Lyke understands that this is not easy. “We tend to hide behind our individualism [as if] ‘I’m not responsible for anything I didn’t do,’” he said. “Today, I’m a good person. I’m generous. I can cite many instances where I am a contributor to the good in society. So, how can I be racist?”

He explained that the Catholic Church has a responsibility to make sure that the church as an institution and its believers are actively anti-racist and not simply avoiding being racist. “That’s what the church needs to assist us with,” he said. “Something I believe very strongly is that when we open up to the Gospel from the pulpit on Sundays, we should leave church disturbed by it, rather than comforted. The Gospel should disturb us. It should push us to better ourselves and not be satisfied with what we have.”

Mr. Lyke said that white people face “two dueling realities.” One is the responsibility of being a faithful follower of Christ. The other is being “complacent and okay with the current system” in the United States despite the fact that it was founded on “white supremacist thinking.”

It is a responsibility of American Catholics to ensure that the “Catholic Church is an anti-racist church” not wall it off as a “safe space” for white people. “That’s part of the suffering that we have to do in order to really build that beloved community,” he said. “It’s worth it. “I believe it’s just worth it.”

“We can honor each other’s dignity and in doing so we learn more about each other and it becomes easier,” Mr. Lyke said. “Those things [that make us] different aren’t as colossal as we may fear they are.”

To learn more about Mr. Lyke’s ministry and the importance of racial justice to American Catholics, be sure to listen to Voting Catholic,a new podcast by America Media that helps Catholics discern how to vote in the 2020 presidential election.