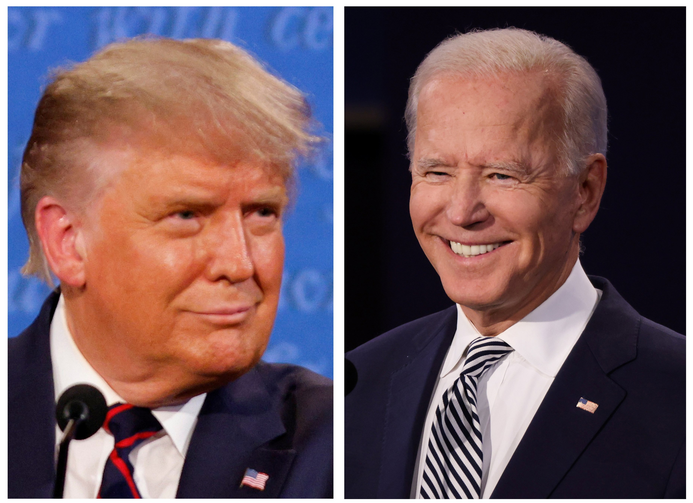 President Donald J. Trump and former Vice President Joseph R. Biden Jr. kept the tone of a normally lighthearted charity dinner somber this year, reflecting both the seriousness of the Covid-19 pandemic and the fact that there was no live audience as the event went virtual.

Hours before announcing that he and his wife, Melania, tested positive for the coronavirus, Mr. Trump said in recorded remarks that the United States was on track to “defeat the virus” and promised a vaccine “before the end of the year and maybe substantially before.”

“I just want to say that the end of the pandemic is in sight, and next year will be one of the greatest years in the history of our country,” Mr. Trump said.

About six hours later, Mr. Trump tweeted that he and Mrs. Trump “tested positive for COVID-19. We will begin our quarantine and recovery process immediately. We will get through this TOGETHER!”

Though the fundraising dinner normally serves as an opportunity for candidates to employ self-deprecating humor and take a break from the intensity of campaigning, both Mr. Trump and Mr. Biden refrained from jokes this year.

In response to the president’s disclosure, Mr. Biden tweeted on Oct. 2: “Jill and I send our thoughts to President Trump and First Lady Melania Trump for a swift recovery. We will continue to pray for the health and safety of the president and his family.” Mr. Biden’s campaign announced today that he and his wife Jill Biden tested negative for the coronavirus.

Mr. Trump kept a robust schedule in recent days, including the Sept. 26 announcement of his nominee to the Supreme Court, Judge Amy Coney Barrett. One of the attendees at that event was John Jenkins, C.S.C., the president of the University of Notre Dame, where Ms. Coney Barrett teaches. Father Jenkins tested positive for the coronavirus, the university announced Oct. 2. Father Jenkins apologized to the Notre Dame community following that event for not wearing a mask and for shaking hands.

The Alfred E. Smith Memorial Foundation Dinner is an annual event that attracts the nominees of both major political parties during presidential election years. Though the fundraising dinner normally serves as an opportunity for candidates to employ self-deprecating humor and take a break from the intensity of campaigning, both Mr. Trump and Mr. Biden refrained from jokes this year. As he did in 2016, Mr. Trump attacked his political opponent and boasted of his popularity, while Mr. Biden highlighted his meetings with Pope Francis and repeated his well-known refrain that his faith has helped him through dark times.

Citing the pandemic and its economic fallout, racial unrest and climate change, Mr. Biden said, “these are difficult times for our country” and urged Americans to keep faith.

“Mark my words, one day we’ll look back in awe not at how far we fell, but how fiercely we fought back as a country. And that sense of hope and possibility reminds me of the first time I met Pope Francis,” Mr. Biden said. Reflecting on that 2013 meeting with the pope, Mr. Biden said, “He was really sending a message to the world, to put out a welcome sign at the front door of our church.”

Hours before announcing that he and his wife, Melania, tested positive for the coronavirus, Mr. Trump said in recorded remarks that the United States was on track to “defeat the virus”

Speaking to the loved ones of the more than 205,000 Americans who have died from complications related to Covid-19, Mr. Biden said, “I know for me, my Catholic faith has helped me through the darkness.”

Both campaigns have sought to appeal to Catholic voters, who make up a critical bloc in several swing states. Mr. Trump’s campaign deploys a robust Catholic outreach team, and Mr. Biden’s campaign yesterday released new ads aimed at capturing religious voters. One of the ads features a clip of a 2015 interview of Mr. Biden conducted by the editor in chief of America, Matt Malone, S.J.

Photos show Mr. Biden praying with a group of people, speaking in a church and standing with Pope Francis as the former vice president talks about how his faith compels him to fight for social justice. The spot is part of a radio and television ad campaign in nine battleground states, The Washington Post reported on Oct. 1. The head of Catholics for Trump, Catherine O’Neill, dismissed the ads, writing in a tweet that they are signs that Mr. Biden “is struggling to win support from people of faith.” A poll released Sept. 21 from the Catholic media organization EWTN found Mr. Biden leading Mr. Trump among Catholic voters by 12 points.

In his remarks at the Al Smith Dinner, Mr. Trump thanked the host of the dinner, Cardinal Timothy Dolan of New York, for his leadership and “for all of the help he’s given me, and so many things and so many different ways.”

Mr. Trump said one of his “top priorities is to defend religious liberty and the cherished role of faith and faith-based organizations in our national life.” He ticked off a list of accomplishments, including the recent Supreme Court nomination of Judge Barrett, federal emergency funding for Catholic school in the wake of the pandemic and “defending the sacred right to life.” He also attacked his political rivals in a tone that is unusual for the fundraising event, accusing the “Democrat Party” of anti-Catholic bias.

The Al Smith dinner is named for former New York Democratic Gov. Alfred E. Smith, the first Catholic to be nominated by either party for the presidency. Mr. Smith lost the 1928 race to Herbert Hoover. In 1960, John F. Kennedy became the first Catholic elected president. Since then, just two Catholics have been nominated by a major party, John Kerry in 2004 and now Mr. Biden in 2020.

The foundation raises money for Catholic charitable organizations in the Archdiocese of New York. The organization said it distributed $8 million during the early weeks of the pandemic to charities working on the front lines.

Cardinal Dolan made some jokes at the expense of both candidates, dinging Mr. Biden for his old age and Mr. Trump over reports that he paid just $750 in federal income taxes in recent years. Following the remarks by Mr. Trump, who has questioned the integrity of vote counting in this year’s election and has avoided making a commitment to a peaceful transfer of power should he lose, the cardinal noted that the dinner’s namesake was referred to as “the happy warrior,” and added, “but he was never a sore loser.”

Michael J. O’Loughlin is the national correspondent for America and host of the America Media podcast "Plague: Untold Stories of AIDS and the Catholic Church."