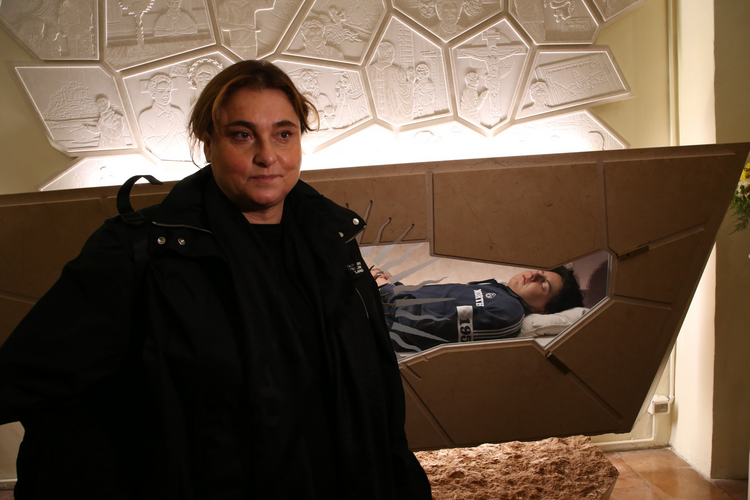 Antonia Salzano, the mother of Carlo Acutis, is pictured in front of his tomb after it was opened in the Church of Santa Maria Maggiore in Assisi, Italy, Oct. 1, 2020. The tomb was opened in advance of the Italian teen's Oct. 10 beatification Mass and will remain open for veneration until Oct. 17. Acutis died in 2006. (CNS photo/courtesy Diocese of Assisi-Nocera Umbra-Gualdo Tadino)

VATICAN CITY (CNS) -- The tomb of Carlo Acutis, a 15-year-old Italian teenager who used his computer programming skills to spread devotion to the Eucharist, was opened for veneration before his beatification in Assisi.

A statement released by the Diocese of Assisi Oct. 1 said the tomb will remain open for veneration until Oct. 17. Acutis' beatification Mass will be held Oct. 10 in the Basilica of St. Francis.

The opening of the tomb was followed by a Mass presided by Archbishop Domenico Sorrentino of Assisi.

The diocesan statement quoted Antonia Salzano, Actuis' mother, as saying she was "overjoyed that Carlo's tomb has finally been opened" and that those who have been touched by the young teen's life "will be able to see him and venerate him in a stronger and more engaging way."

"We hope that through the exposition of Carlo's body, the faithful will be able to raise with more fervor and faith their prayers to God who, through Carlo, invites us all to have more faith, hope and love for him and for our brothers and sisters just as Carlo did in his earthly life," she said.

When perpetual adoration takes on a new meaning
Julia Walsh

Photos of the remains of the soon-to-be-beatified teen revealed he was buried in jeans and a simple track suit jacket -- the attire he was accustomed to wearing and what is seen in many of the photos taken of him during his life.

In his exhortation on young people, "Christus Vivit" ("Christ Lives"), Pope Francis said Acutis was a role model for young people today who are often tempted by the traps of "self-absorption, isolation and empty pleasure."

"Carlo was well-aware that the whole apparatus of communications, advertising and social networking can be used to lull us, to make us addicted to consumerism and buying the latest thing on the market, obsessed with our free time, caught up in negativity," the pope wrote.

"Yet he knew how to use the new communications technology to transmit the Gospel, to communicate values and beauty," he said.