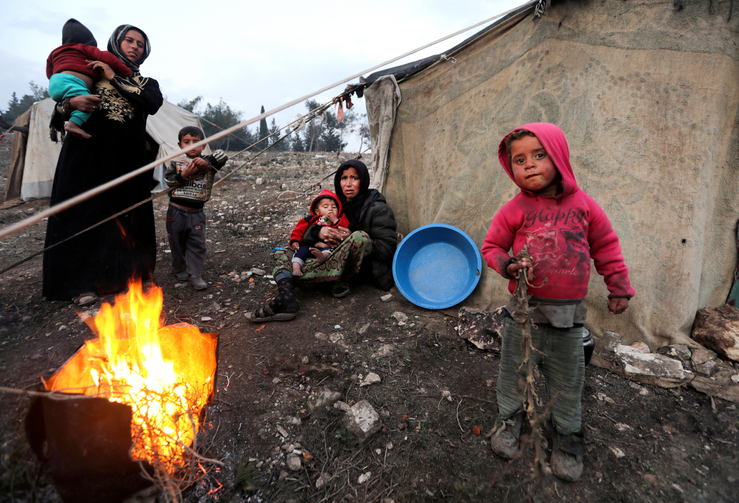 A file photo shows displaced Syrian women and children who fled from Idlib province gathering around a fire in Afrin. A majority of Syrians who have had to flee their homeland are Christians. (CNS photo/Khalil Ashawi, Reuters)

WASHINGTON (CNS) -- A digital summit sponsored by In Defense of Christians, "Combating Global Christian Persecution," showed that the fight against all forms of religious persecution continues with a renewing cast of political leaders.

Rep. French Hill, R-Arkansas, last year's winner of the group's Congressional Champion award for his support of Coptic Christians in Egypt, pointed out in his remarks that while "religious freedom is part of American foreign policy," attacks on Coptic Christians continue.

A House resolution introduced by Hill last year called for the Egyptian government to abolish its "culture of impunity" and to hold local officials responsible.

This year's Congressional Champion, Rep. Dan Crenshaw, R-Texas, a former Navy SEAL, was recognized for advocating for the preservation of Christians in the Middle East. The event was held Sept. 23.

"I saw this lack of freedom in my first three deployments" in Iraq and Afghanistan, he said, seeing "firsthand the history of a country run by extremists."

He called the Islamic State "evil incarnate" and "the consequences of seeing a world as we wished it were rather than as it really is."

The American government allowed that to emerge because "we stopped believing in advancing the ideology of freedom. Evil like the Islamic State can only exist when American refuses the chance to lead."

The work of In Defense of Christians gained the endorsement of New York Cardinal Timothy M. Dolan.

When he travels to parts of the world where Christians are known to be threatened with slaughter, he said in a recorded statement, "they constantly say to me, 'We feel forgotten. We don't hear anyone speaking up for us. We feel like we're orphans. And we need your love, we need your support.' And I tell them, you got it."

Other issues include the formal U.S. condemnation -- passed by Congress, but not yet signed by President Donald Trump -- of the Armenian genocide of 1915; the ongoing Christian genocide in Nigeria; and anti-blasphemy and apostasy laws used to stifle dissent in the Middle East and Asia.

"We're not going to be bullied or bribed into silence," said Richard Ghazal, an Air Force judge advocate who acts as a senior adviser to In Defense of Christians.

Sen. James Lankford, R-Oklahoma, has co-sponsored a Senate resolution calling for the global repeal of blasphemy, heresy and apostasy laws, which, he observed, affect Muslims as well as members of other faiths and those who express no faith at all.

He pointed to the example of an American, Tahir Naseem, who on July 20 was shot and killed inside a Pakistani courtroom, where he'd been charged with blasphemy against Islam.

Saudi Arabia, Lankford said, promotes religious intolerance on social media, and in Russia in 2017, a blogger, Ruslan Sokolovsky, received a suspended prison sentence for blasphemy simply for playing a video game, Pokemon Go in a cathedral. The incident was widely condemned as an abuse of the legal system.

"One of the most important drivers of intolerance" in the Middle East "is education," said Rep. Joe Wilson, R-South Carolina. Official textbooks approved in Saudi Arabia teach that Christians and Jews are "enemies of Islam and its people." Those textbooks became "materials of choice for ISIS."

Rep. Jamie Raskin, D-Maryland, explained the need for the House resolution he introduced last year to "make the repeal of blasphemy, heresy, and apostasy laws a priority in bilateral relationships between the United States and countries that have such laws" and further, to " oppose efforts by the United Nations to implement an international anti-blasphemy norm."

"Any religious adherent can be a victim," he said, and the oppressor can be "whoever has the power of the state behind them."

Raskin reminded the gathering of "a basic principle of humanity: That people have got to be safe to worship as they please, or not worship at all."

Former Congressman Frank Wolf of Virginia pointed to a recent Pew Research Institute survey showing that "80% of the world's population ... at this very moment lives in a repressive religious environment."

"The cries of the persecuted are met by the sound of silence by many in the faith community and many in the West," he said. "In the pulpits of many Western churches, we have really heard the sounds of silence."

The Washington-based In Defense of Christians focuses most of its advocacy on the Middle East. In addition to gaining, in 2019, congressional condemnation of the Armenian genocide, the organization also backed the 2018 Iraq and Syria Genocide Relief and Accountability Act, signed into law by Trump. This provides direct aid for Christians who survived persecution by the Islamic State.

Provide feedback on this article
Join the conversation: Login or create an account
Before you can comment, you need to update your profile to include your first and last name, as required in our comments policy. Then reload this page and you'll be set up for commenting. Update your profile
More: Middle East / Religious Freedom