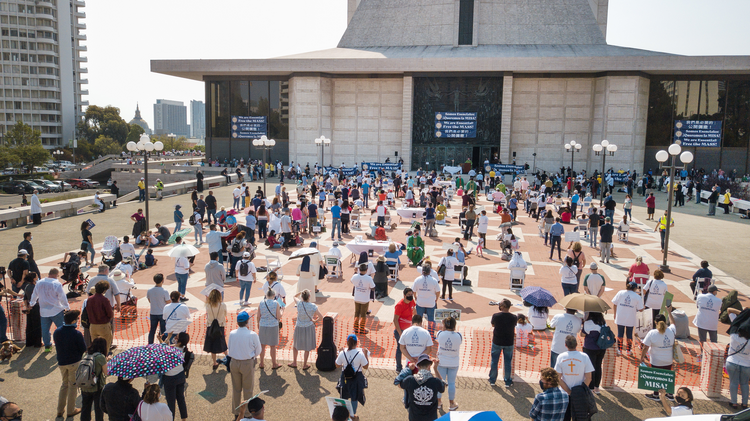 SAN FRANCISCO (CNS) -- Archbishop Salvatore J. Cordileone of San Francisco thanked the U.S. Department of Justice for its three-page letter sent Sept. 25 to Mayor London Breed calling on her to "promptly" end discriminating against religious believers by loosening the city's harsh restrictions on houses of worship.

"I am very grateful to the Department of Justice for this letter calling on Mayor London Breed to stop violating the civil rights of Catholics and other believers in San Francisco," the archbishop said in a statement.

"Catholics in San Francisco have been patiently suffering injustice for months. At last, a competent legal authority is challenging the city’s absurd rules, which have no basis in science, but are grounded in hostility to religion and especially the Catholic Church," he said.

"In particular, the limitation of indoor worship to one congregant without regard to the size of the place of worship," he said, "is draconian, out of step with the treatment afforded other similar indoor activities in San Francisco, wholly at odds with this nation’s traditional understanding of religious liberty, and may violate the First Amendment to the Constitution."

He acknowledged that Breed and other city officials, including health officials, "have a duty to protect the health and safety of the people of San Francisco in the face of the global COVID-19 pandemic."

"In exigent circumstances, the Constitution allows some temporary restriction on our liberties that would not be tolerated in normal circumstances," Dreiband wrote.

Currently, he said, the city allows only that "one individual member of the public may enter the house of worship at a time," no matter how big that house of worship is, such as San Francisco's Cathedral of St. Mary of the Assumption, which can hold over 2,400 worshippers, and Temple Sherith Israel, which has the capacity for 1,400 people.

Dreiband also noted the city's "'goal' is to increase permitted indoors attendance at houses of worship to 25% of capacity up to a maximum of 25 people by the 'end of September.'"

"This would be an improvement over the current situation, but would continue to burden religious exercise severely and unnecessarily, including for houses of worship with large capacity and room for proper social-distancing protocols," he said.

These rules "plainly discriminate against people of faith and their ability to gather and practice their faith at churches, synagogues, mosques and other houses of worship," he said, because the city does not apply the same rules to personal service providers ,like barber shops, nail salons, massage locations or and tattoo parlors, and department stores and other retail operations.

"We respectfully request that the city promptly change its current standards to bring them in line with the Constitution and our nation’s best traditions of free religious exercise. Doing so will enable all religious San Franciscans to gather together and practice their faith consistent with appropriate public health limitations," Dreiband said.

"The Department of Justice is reviewing its options and may take further action, as and if appropriate, to protect the religious liberty rights of the people of San Francisco. Thank you for your prompt attention to this matter," he said.

On Sept. 20, Archbishop Cordileone told hundreds of Catholics gathered near City Hall that "it is because of our Catholic faith that we are being put at the end of the line" by city officials in enacting what could be the country's harshest pandemic restrictions on religious worship.

"The city continues to place unrealistic and suffocating restrictions on our natural and constitutional right to worship. This willful discrimination is affecting us all," he said. "Yes, discrimination, because there is no other word for it."

He made the comments in a homily at a Mass that followed eucharistic processions to a plaza near San Francisco's City Hall. More than 1,000 Catholics participated in the archdiocesan "Free the Mass" demonstration and outdoor Masses.