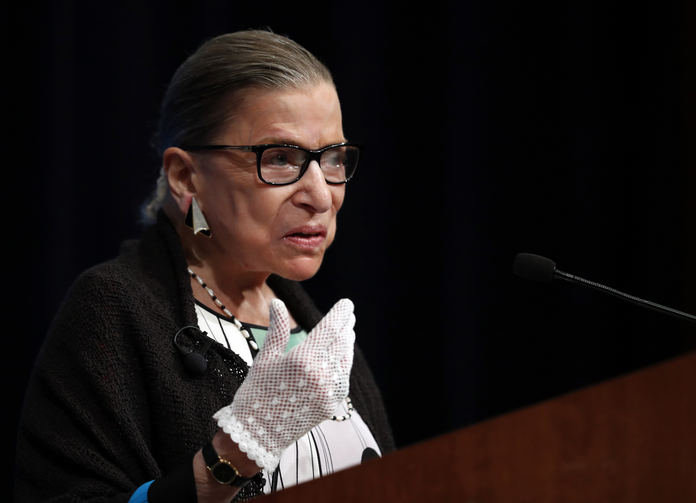 (RNS) — Today, as Justice Ruth Bader Ginsburg's casket lies in repose at the Supreme Court, she is being lionized by progressives and feminists. But that wasn't always the case. Ginsburg's nomination to the highest court in 1993 almost didn't happen because President Bill Clinton had heard that some feminists didn't like her.

The reason was Ginsburg's criticism of Roe v. Wade, the 1973 SCOTUS decision that effectively made abortion legal in all 50 states. Ginsburg thought the ruling was correct, but too sweeping.

In a 1992 talk at New York University that she later turned into a law review article, Ginsburg argued that the court had been right to strike down the Texas anti-abortion law challenged by the plaintiff, "Jane Roe," but Ginsburg said that the justices erred in their "breathtaking" decision to render virtually every abortion restriction in the country illegal.

Ruth Bader Ginsburg thought the ruling in Roe v. Wade was correct, but too sweeping.

A narrower decision, she felt, was normal and proper judicial behavior, and if the court had exercised more restraint, the country would not have had the decades of controversy we have witnessed. Given that state legislatures were already leaning toward liberalization of abortion statutes, abortion would have soon become widely legal through legislative means, with broader support. In that sense, Ginsburg implied, Roe was counterproductive.

"Around that extraordinary decision," she said, "a well-organized and vocal right-to-life movement rallied and succeeded, for a considerable time, in turning the legislative tide in the opposite direction."

Roe v. Wade "invited no dialogue with legislators," she wrote. "Instead, it seemed entirely to remove the ball from the legislators' court."

Ginsburg's argument is supported by the experience of Europe, where abortion became legal through legislation and referenda rather than court action. As a result, it has not been the political football it is in the United States.

In her speech, Ginsburg contrasted the court's treatment of abortion with its treatment of gender classification cases, in which the justices extended benefits and required "legislative reexamination of once customary sex-based classifications." Thus, "the Court helped to ensure that laws and regulations would 'catch up with a changed world.'"

Roe v. Wade “invited no dialogue with legislators,” Ginsburg wrote. “Instead, it seemed entirely to remove the ball from the legislators’ court.”

This incremental legal strategy on sex-based classifications was, of course, designed by Ginsburg when she was a lawyer arguing gender equality cases before the court. She chipped away at sex discrimination case by case over the years rather than depending on one sweeping decision.

At one extreme, the Supreme Court steps boldly in front of the political process, as some believe it did in Roe. At the opposite extreme, the Court in the early part of the twentieth century found-or thrust-itself into the rearguard opposing change, striking down, as unconstitutional, laws embodying a new philosophy of economic regulation at odds with the nineteenth century's laissez-faire approach.

Both approaches brought outcries that the judiciary was "activist" or "imperial," putting at risk the Supreme Court's authority. "Its precarious position as final arbiter of constitutional questions was exposed," she said.

Ginsburg recognized that the court must maintain its prestige to persuade since it does not have the power to enforce its views. "The Justices generally follow, they do not lead, changes taking place elsewhere in society," she noted, but they "can reinforce or signal a green light for a social change."

Ginsburg didn't think it was always wrong for the court to get out ahead of legislation. She approved of Brown v. Board of Education, the 1954 decision against racial segregation in public schools, she said, because she saw the circumstances of Brown as different from Roe.

Ginsburg recognized that the court must maintain its prestige to persuade since it does not have the power to enforce its views.

At the time of Brown, "apartheid remained the law-enforced system in several states, shielded by a constitutional interpretation the Court itself advanced at the turn of the century — the 'separate but equal' doctrine," she explained.

"In contrast to the legislative reform movement in the states, contemporaneous with Roe, widening access to abortion, prospects in 1954 for state legislation dismantling racially segregated schools were bleak," she asserted.

While feminist doctrine asserts that sex discrimination should be viewed in the same way as racial discrimination, Ginsburg applied a pragmatic approach on how to attack the two problems.

"Most women are life partners of men; women bear and raise both sons and daughters," she said. "Once women's own consciousness was awakened to the unfairness of allocating opportunity and responsibility on the basis of sex, education of others — of fathers, husbands, sons as well as daughters — could begin, or be reinforced, at home. When blacks were confined by law to a separate sector, there was no similar prospect for educating the white majority."

What is striking about Ginsburg's reasoning is not simply that she disagreed with many feminist activists on Roe v. Wade; she recognized that judges must not only look at the law in the abstract but must assess how it is evolving (or not) in a political and cultural ecosystem.

Ginsburg recognized that judges must not only look at the law in the abstract but must assess how it is evolving (or not) in a political and cultural ecosystem.

If President Donald Trump successfully moves the court to a 6-3 conservative majority, will that majority close its eyes to the current ecosystem and make the same mistake the liberals made in Roe? Or will they exercise judicial restraint? Will they make sweeping decisions or will they follow Chief Justice John Roberts, who, like Ginsburg, appears to be an incrementalist?

The reputation of the court as a nonpartisan institution hangs in the balance.

As a Catholic, I cannot end this column without looking at how Ginsburg's reasoning might apply to the Catholic Church.

The Second Vatican Council made sweeping and revolutionary changes in the Catholic Church. Was it like Roe v. Wade, an overreach, or was it like Brown v. Board of Education, a necessary revolution?

In championing Vatican II, Pope Paul VI knew he risked a backlash from traditionalists, which in fact occurred. The papacies of John Paul II and Benedict XVI are seen by supporters of the council as stifling the reform movement in the church, which resulted in a backlash in the opposite direction. Now, with Pope Francis, we once again see a backlash among traditionalists, though he is following an incremental strategy of reform.

Ginsburg's analysis should give pause to all people in politics and the church who think they can impose their views while ignoring the reality on the ground. As we honor Ginsburg, we should take to heart her advice on incrementalism and compromise, which helps maintain stability and faith in our institutions.

Provide feedback on this article
Join the conversation: Login or create an account
Before you can comment, you need to update your profile to include your first and last name, as required in our comments policy. Then reload this page and you'll be set up for commenting. Update your profile
More: Supreme Court / Abortion / Vatican II