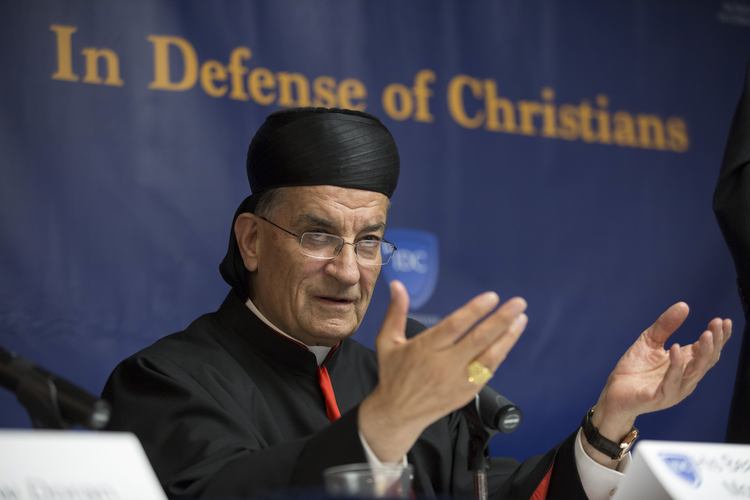 Lebanese Cardinal Bechara Rai, patriarch of the Maronite Catholic Church, is pictured in a 2017 file photo speaking at the In Defense of Christians Summit in Washington. He described the shrinking presence of Christians in the Middle East as a sinking ship to leaders of the Middle East Council of Churches Sept. 18, 2020. (CNS photo/Jaclyn Lippelmann, Catholic Standard)

BEIRUT (CNS) — Lebanese Cardinal Bechara Rai warned that the Christian presence in the Middle East is shrinking and church leaders “are called to face the winds that blow in our homelands.”

The assessment by the patriarch of Maronite Catholics during a meeting of the Middle East Council of Churches executive committee Sept. 18 underscored the dire reality facing Christians in the tumultuous region.

“The ship threatened by strong winds and waves” that is sinking symbolizes “the witnessing church in the sea of our Middle Eastern countries troubled by the winds of conflicts and wars, political, economic, financial and livelihood crises, and the corona epidemic,” Cardinal Rai said.

The cardinal also explained at the meeting he hosted at Bkerke, the Maronite patriarchate north of Beirut, that the threat “reached its climax” in Lebanon with the catastrophic double explosion in the port of Beirut Aug. 4. The disaster left nearly 200 people dead, injured another 6,000, and displaced more than 300,000 people.

He stressed that the MECC is called in such turbulent time to work with churches and their leaders, institutions and the faithful “to face the waves and winds that ravage their homelands … with stances of faith and hope.”

“We ask you, Lord, through the intercession of our Mother Virgin Mary, the star of the sea in the storm, to lead our homelands, our churches and our people to the port of safety,” Cardinal Rai pleaded.

The MECC in its final statement reiterated its appeal for an end to “the destructive wars and conflicts in the Middle East, to protect human dignity, and build peace on the basis of justice and rights.”

Meeting participants expressed their “deep solidarity” with the Lebanese in the “catastrophic tragedy” they are suffering from the Beirut explosions. They called for continued “ecumenical ecclesiastical efforts with all local, regional and international partners to lift the material and psychological repercussions of this tragedy.”

They also expressed their solidarity with all those affected by the coronavirus pandemic, especially people who have lost loved ones, offered appreciation to medical and humanitarian aid teams, and assured their continued prayers for an end to the pandemic.

MECC follows a custom of electing its secretary general every four years from a different Christian rite. Abs is Greek Orthodox. Bechealany is Maronite Catholic and was the first woman to hold the leadership post.

The MECC executive committee gathered Catholic, Orthodox and Protestant representatives. Because of the coronavirus pandemic, the three-day meeting schedule was shortened to one day with members from Egypt, Kuwait, the Palestinian territory, Jordan, Syria, Iraq, Iran and Cyprus joining electronically.

Doreen Abi Raad - Catholic News Service
Provide feedback on this article
Join the conversation: Login or create an account
Before you can comment, you need to update your profile to include your first and last name, as required in our comments policy. Then reload this page and you'll be set up for commenting. Update your profile