Aid making its way to flooded communities in northeastern Africa

Aid making its way to flooded communities in northeastern Africa 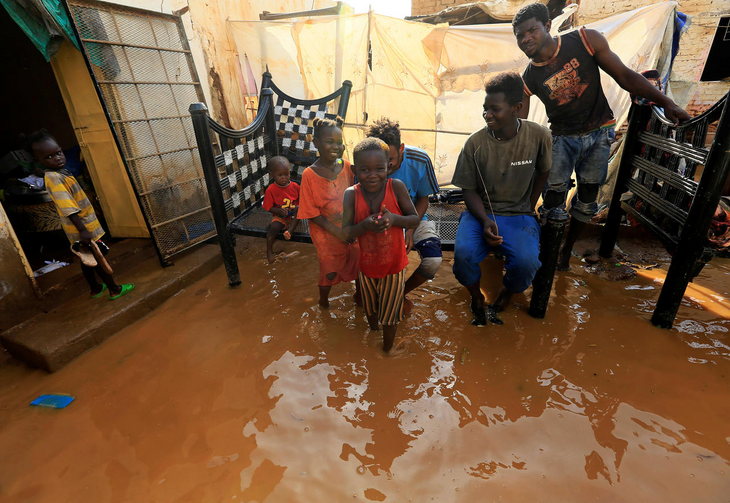 Young people are seen in late August amid floodwaters following heavy rains in Khartoum, Sudan. Since July, at least 118 people have been killed in the aftermath of days of torrential rains that brought record-breaking flash floods to the country. (CNS photo/Mohamed Nureldin Abdallah, Reuters)

NAIROBI, Kenya (CNS) — As rising flood waters claim lives and displace thousands in Sudan, church and church-related humanitarian agencies are responding to the disaster caused by unusually heavy rains around sources of the Nile River.

Sudan has experienced a series of torrential rains since mid-July that have led to the deadly flooding.

At least 118 people have died since the rains began, officials reported. Overall, more than 700,000 have been affected as electric power, water supplies and transportation has been disrupted.

“It has been disastrous and unimaginable,” Father Musa Timothy, general secretary of the Sudan Catholic Bishops Conference, told Catholic News Service in a telephone interview from Khartoum.

“The church is preparing to offer help. In the immediate, the people need food, tents for shelter, blankets and mosquito nets so that they do not get malaria and other diseases. This is very urgent,” he said.

Seventeen of Sudan’s 18 states have experienced at least some flooding. The capital of Khartoum, where the Nile’s two main tributaries, the Blue Nile and White Nile converge, also has seen massive flooding.

Thousands of Khartoum residents have fled their homes and are camping in schools and other public places. Officials said the current flooding has surpassed the 1946 and 1988 disasters.

As the death toll rose, the country’s Security and Defense Council declared Sept. 4 a three-month state of emergency.

“Tens of thousands of homes have been damaged or destroyed,” Persiana Kamberaj, head of programs for Catholic Relief Services in Khartoum, said, adding that flooding has ignited an urgent need for humanitarian aid.

Why I have not left my Jesuit mission in Africa during the coronavirus pandemic
Matthew Ippel, S.J.

CRS has responded to flood-affected households and communities in Darfur in cooperation with local agencies.

Kamberaj said helping people to protect themselves from direct sun and adverse weather conditions is a priority for the next 30 to 60 days.

“The heavy rains and floods have impacted the livelihoods of families. With farming lands damaged and livestock killed, there is a need to support interventions that would revive their livelihoods,” Kamberaj said.

Sudan’s neighbors, South Sudan and Ethiopia, also have witnessed similar flooding. The United Nations reported that more than 600,000 people were affected in Jonglei state in South Sudan after the White Nile overflowed its banks. An estimated 300,000 people have been displaced in Ethiopia.

Zemede Zewdie, head of programs for CRS in Ethiopia, said the floods have created substantial damage and displacement in several areas of the country and that the agency was responding, although it faced a funding challenge.

“CRS is already somewhat overstretched due to competing priorities. At the moment, we are also supporting people impacted by the desert locust invasion, people displaced due to internal conflict, and we are also working to mitigate the impacts of COVID-19, along with our other regular emergency food distribution programming,” Zewdie said.

Provide feedback on this article
Join the conversation: Login or create an account
Before you can comment, you need to update your profile to include your first and last name, as required in our comments policy. Then reload this page and you'll be set up for commenting. Update your profile
More: Africa / Humanitarian Aid