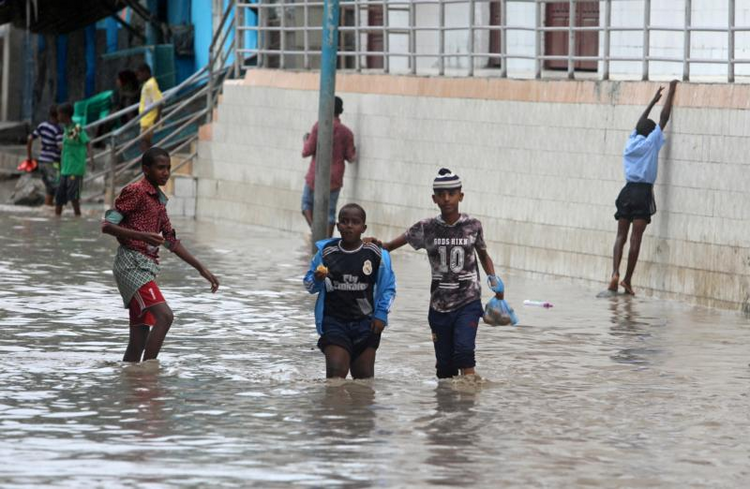 Somali children walk through floodwaters after heavy rains in Mogadishu Nov. 26, 2019. Caritas, the relief arm of the Catholic Church, has delivered food aid to Muslims in Somalia, who are currently facing floods and living in a fragile peace environment due a prolonged Islamist insurgency. (CNS photo/Feisal Omar, Reuters)

NAIROBI, Kenya (CNS) -- Caritas, the relief arm of the Catholic Church, has delivered food aid to Muslims in Somalia, who are currently facing floods and living in a fragile peace environment due a prolonged Islamist insurgency.

The aid reached families in Berdale, a small town center of 50,000 people, including 6,000 people displaced from their homes. The town has been cut off following flooding that left most areas submerged, making it difficult for the people to access emergency food, medicine and shelter.

"Caritas Somalia is carrying out interventions working with another NGO in Berdale severely hit by the floods. The intervention was finalized (Dec. 3). It consists of food for 1,000 families for one month," Archbishop Giorgio Bertin, apostolic administrator of Mogadishu, told Catholic News Service.

Nearly 273,000 people have been displaced in the flood with at least killed 17 others being killed in the Horn of Africa country, according to U.N. Office for the Coordination of Humanitarian Affairs. Some are now sheltering under trees or in emergency tents. According to agencies a combination of floods, drought and conflict have displaced an estimated 575,000 people this year alone.

Scientists say a weather phenomenon in the Indian Ocean is causing unusually heavy rains across East Africa, with swollen rivers bursting banks and some areas experiencing floods and mudslides. The pattern was forecast to peak around Dec. 6 with a storm making landfall in northern Somalia.

Somalia is the base of al-Shabab, the al-Qaida affiliate in East Africa, a brutal force that has been executing and amputating people and flogging women in pubic in attempt to implement a radical form of Islamic law. Its violent actions in southern Somalia have often hindered delivery of humanitarian aid.

Although, in the past, the militant group has attempted to distribute relief, Archbishop Bertin warned that the al-Shabab insurgency and recent local and national political developments continued to work against peace and stability of the country, which has experienced conflict since 1991.

"Peace remains a fragile baby, particularly in central-southern Somalia, because of the weakness of the federal government, the tensions between central authorities and the authorities of the state ... and because of the Islamic rebellion," said the archbishop.

He has been urging the international community to do more to help stabilize the country and its people to unite to rebuild their nation.

"The country needs a sense of patriotism (from the local people) and, of course, from abroad (foreign nations) a concerted united approach," said Archbishop Bertin.

Before the floods, an estimated 6.3 million Somalis were already facing serious food shortages due to a persistent drought. Alternate droughts and floods have become more frequent in country and much of sub-Saharan Africa in this era of climate change, experts say.

Deaths and displacement related to flooding have been reported in Kenya, Uganda, Ethiopia, Tanzania, Sudan and South Sudan. At least 130 Kenyans have died due to floods, mudslides, lightning strikes and hailstorms.

Show Comments ()
Comments are automatically closed two weeks after an article's initial publication. See our comments policy for more.
Provide feedback on this article
Join the conversation: Login or create an account
Before you can comment, you need to update your profile to include your first and last name, as required in our comments policy. Then reload this page and you'll be set up for commenting. Update your profile
Advertisement
More: Humanitarian Aid / Africa / Islam