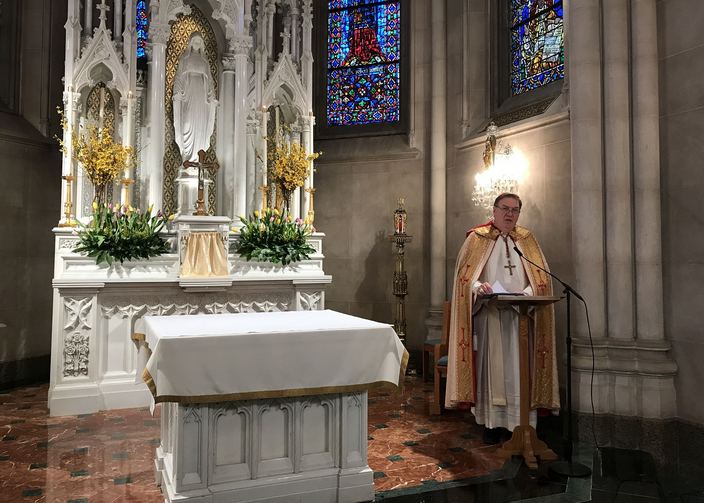 Cardinal Joseph W. Tobin of Newark, N.J., is seen in the Lady Chapel of the Cathedral Basilica of the Sacred Heart in this undated photo. (CNS photo/courtesy Archdiocese of Newark)

WEST PALM BEACH, Fla. (CNS) -- Whether Catholic voters favor a candidate most in line with their own basket of priority issues or whether they look for character and competency or just look to party affiliation, the Catholic electorate has plenty to mull over in 2020.

"When you think about the people we have elected for U.S. president over the past several elections, they have all had to deal with issues and problems that were not even on the horizon when we elected them, so when we elected President (Donald) Trump, nobody was thinking about coronavirus, but it has absolutely consumed our attention over these past several months," said M. Cathleen Kaveny, a law and theology professor at Boston College.

"Issues are important, but our main thing should be to think about choosing a person and what kind of person can do the job," said Kaveny. "You need both competence and character.

"Character is a kind of moral competency and to weigh the competing goods as stake and not put too much emphasis on self-interest but to really be focused on the common good including those people who did not vote for you."

Kaveny was one of several featured panelists during a Sept. 15 webinar on "The Church and Catholic Voters in the 2020 Election" hosted by Boston College's Boisi Center for Religion and the American Public as part of its ongoing webinar series on the 2020 election and Catholic vote.

Four Catholic thinkers, including Cardinal Joseph W. Tobin of Newark, New Jersey, helped unpack some of the thought processes and frameworks that ought to be going on in the mind of Catholic voters as the U.S. approaches the Nov. 3 presidential election.

Hosted by Jesuit Father Mark Massa, director of the Boisi Center, the group took into account everything from abortion to immigration, policy to personality, and then considered what does the Catholic Church have to say?

The conversation comes at a time when special interest groups such as Catholics for Truth have launched a campaign to proclaim that Joe Biden and Kamala Harris represent the most anti-Catholic presidential ticket in U.S. history.

On the other side, 600 social justice leaders, scholars and others under the umbrella of Faith in Public Life Action recently endorsed a nationwide open letter to Catholic voters with a warning that Trump "flouts core values at the heart of Catholic social teaching."

Kaveny said she wonders if Catholics are thinking enough about a candidate's competence and character. She worries Catholic voters may in fact look very much like the average American vote overall, guided chiefly by party affiliation and economic loyalties rather than critical thinking.

For his part, Cardinal Tobin said he speculated that Catholic voters in his archdiocese have some particular concerns that relate to the local population and its immigrant nature in northern New Jersey, including having been dealt an especially difficult episode with the COVID-19 pandemic.

"There are many collateral issues ... that will figure into people's minds as they go to the polls: health care, leadership at all levels of society including the church; and another feature of our particular region is the presence of people born elsewhere, outside of the United States," Cardinal Tobin said, mentioning the local presence of many Latinos and people born in South Asia and the Philippines.

Trump or Biden? What’s a Catholic voter to do?
Thomas J. Reese

"The rhetoric around immigration will be part of people's minds when they go to the polls, including the recent attacks on DACA (Deferred Action for Childhood Arrivals) and renewed aggression toward Temporary Protected Status (TPS)," the cardinal said, also noting the importance voters will likely place on economic issues, including high property taxes and high unemployment in northern New Jersey.

In terms of the voter thought processes and forming good political decisions as Catholics, Cardinal Tobin said Catholics ought to identify first as Catholics, with their practice of the faith leading to political ideology and identity. But not the other way around.

He added that no political party fully represents the Catholic tradition.

"When I make my choices I should have in mind what do I as a missionary disciple of Jesus Christ, who do I need to do or need to advocate for in these circumstances? The worst thing would be to make one's religious identity of faith an instrument to support one's politics," the cardinal said.

"I would like to think that our act of voting is an act of discernment: reading the signs of the times and places in the light of faith," he added.

Cardinal Tobin said a Catholic voter has at least two different methods for trying to decide who to vote for. One is to reduce something to a yes or a no, but the first method "should be a process of discernment of the common good."

But it is not sufficient for a voter to wait for someone to come along who is 100% in step with the fullness of Catholic tradition, the cardinal said.

"The virtue of prudence means that you weigh everything in favor of the overweening value for the good of this political arrangement called the United States of America. And I don't think we can reduce (our decision), at least in the current the panorama of issues, to how a candidate stands on a single issue."

Michael Sean Winters, a book author and columnist for the National Catholic Reporter, touched on the proliferation of political punditry in U.S. political life over the past 40 or 50 years and the emergence of so many special interest groups, strident media personalities and fringe influencers even within Catholic life.

He also called for an updated teaching document to replace "Forming Consciences for Faithful Citizenship: A Call to Political Responsibility From the Catholic Bishops of the United States," offered as a guide to Catholic voters every presidential election year since 1976. It has been updated periodically.

Winters said the document should be updated to draw more extensively on pertinent teachings of Pope Francis as well as Pope Benedict XVI.

"It behooves the bishops to take a step back and teach what the church teaches and make sure that Catholic social teaching is no longer the best kept secret and to start teaching it," Winters argued.

The church also must look for opportunities that testify to the fact that "the Gospel stands in judgment over ourselves and over our culture and over our decisions, and not the other way around -- it's not Play-Doh, you can't squeeze it into your tubes that you specifically want," he said.

Provide feedback on this article
Join the conversation: Login or create an account
Before you can comment, you need to update your profile to include your first and last name, as required in our comments policy. Then reload this page and you'll be set up for commenting. Update your profile
Advertisement
More: Election 2020 / US Politics / Catholic Identity / Catholic Social Teaching