Study: Teens’ religious practice less than that of their parents 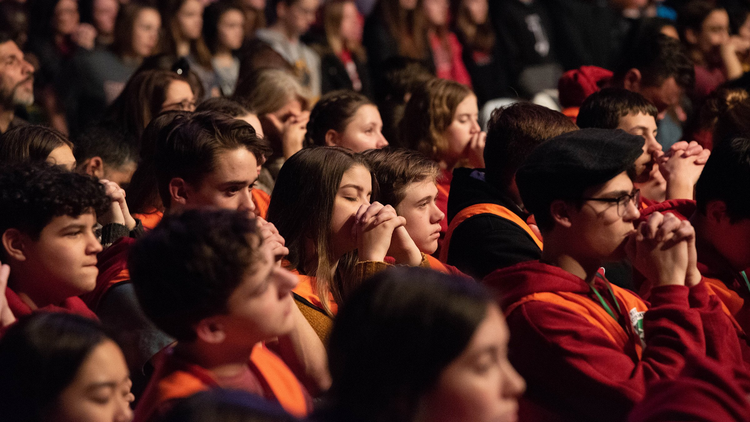 WASHINGTON (CNS) -- A Pew Research Center study released in September shows that teens' religious practice is less than that of their parents. The lessened observance cuts across all denominational lines.

And religious practice by adults, the study noted, has itself declined in recent decades.

One key finding of the report is that 43% of parents said religion is "very important in their lives," and that, of teens ages 13-17, only 24% feel the same.

Surveys were taken of 1,811 adults who had given Pew permission for one of their teen children to later take the same survey. The surveys were conducted in April-June 2019, long before the ongoing coronavirus pandemic.

Christina Lamas, executive director of the National Federation for Catholic Youth Ministry, told Catholic News Service that she finds it hard to square the figures in the Pew report with what she sees at her organization's biennial conventions in Indianapolis.

"When you're able to witness the fire and engagement of 20,000 young people ... who are sharing on social media about their relationship with God, it's hard to process what the statistics are saying with what we're witnessing," Lamas said.

She took some comfort in one finding from Pew than 47% of Hispanic teens identify as Catholic.

"Faith is very much embedded into the culture of the community," Lamas said. "In Hispanic families, God and religious practices are lived out daily. It's part of who the individual is, not separate. I can see why the specifics are higher among Hispanic families, absolutely."

Still, she is cognizant of societal forces that can erode strength in Catholic belief and practice. NFCYM has had in its toolbox for the past 15 years an initiative called Strong Catholic Families, designed to combat secularizing influences.

How do we stay spiritually fit in a time of coronavirus?
Holly Taylor Coolman

Our teens are leaving the church. Why?
William D. Dinges

The Pew study found that teens tend to follow the religious preferences of their parents, whatever they are. Only 17% said they are charting a different course.

Many teens reported that their parents encouraged them to attend worship services and other religious activities together; 21% said their parents did this "a lot."

Lamas said what happens as dioceses and parishes relax pandemic restrictions on Mass attendance and parish participation will bear watching. "Over the next coming months, I think it's going to be critical," she added, noting a quote from the Pew report about how attendance at religious services "tends to be a family activity."

But a poll of young adults ages 18-35 released Sept. 14 by the Center for Applied Research in the Apostolate found that, while 51% said they intend to go to Mass as much as before once restrictions are lifted, 36% said they would attend less frequently, with 14% reporting they would go more often. The poll also showed only about 25% having watched Mass online since pandemic-necessitated streaming of Mass and other religious services began in earnest. (Editors:Some rounding has occurred, which is why it equals 101%.)

Elizabeth Podrebarac Sciupac, a senior researcher at Pew who was the lead researcher for the study, said Catholics' numbers fell between those of evangelical and mainline Protestants in survey responses. While the overall margin of error is 3.1 percentage points for the full survey, that margin rises when dealing with smaller groups within the overall sample. A difference of 6 or 7 percentage points, she added, was "not statistically significant."

Religious practice and identity, the study said, "varies across the life course, often declining in late adolescence and early adulthood, and then increasing as people age, form new relationships, start their own families and mature into later adulthood."

The report also asked the question, "Are America's youths set to halt or reverse the country's trend toward secularization?" and then answered it: "Not necessarily. While it is possible that these adolescents will ultimately be equally or more religious than current young adults, this survey neither supports nor contradicts such a hypothesis."