Beirut priest: ‘Everyone has a painful, heartbreaking story’ 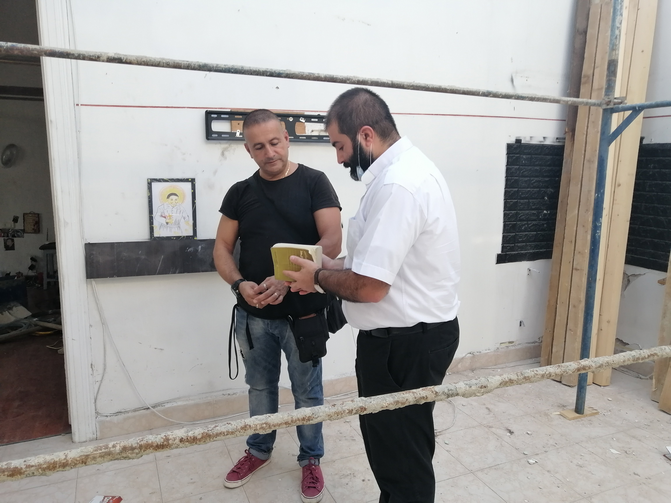 Vincentian Father Michel Ibrahim prepares to read from the Bible and pray with Joseph Mitri, whose family home in Beirut was severely damaged in the Aug. 4 port blasts. (CNS photo/Doreen AbiRaad)

BEIRUT (CNS) -- A personal visit from a priest can give strength to those whose lives have been turned upside down by the trauma and devastation of the Beirut port blasts.

"There is so much suffering," Vincentian Father Michel Ibrahim told Catholic News Service as he made his way through the stricken Beirut neighborhood of Mar Mikhael to visit families. "Everyone has a painful, heartbreaking story."

Yet, Father Ibrahim said, "many also have a survival story and have experienced God's powerful protection."

Selwa Al Chakhtoura considers it a blessing that her family was spared during the Aug. 4 blast, which killed almost 200 people, injured another 6,000, and displaced more than 300,000 people when 2,750 metric tons of ammonium nitrate detonated.

She and her grown daughter, Micheline, were driving through Beirut at the time.

"I will never forget the people in the streets, covered with blood," Al Chakhtoura told Father Ibrahim.

In the chaos, the mother and daughter were rushing to get home to Al Chakhtoura's apartment. Their family was scared but fine: All the doors leading to the kitchen and bedrooms were blown out, as were the windows of the apartment.

In the living room, with seating pushed together to make way for repairs, Father Ibrahim asked Al Chakhtoura to open his Bible and select a reading. She listened attentively as the priest read from the Second Letter to the Corinthians, "He is not weak toward you but powerful in you." The priest then invited her to pray the Our Father and Hail Mary with him.

"We have to pray because only Jesus can help and support us," Father Ibrahim told her.

He took the black cord necklace affixed with a crucifix and the Miraculous Medal from his neck and placed it around Al Chakhtoura's neck.

"I am giving you a part of me to keep with you always," he told her. Eyes wide with surprise, then brimming with tears of gratitude, she responded, "I am so touched, Father."

"Thank God for everything," she said.

A few blocks away, Father Ibrahim visited Joseph Mitri's damaged apartment, taking an electric fan to give Mitri some relief from the oppressive heat. The first time Father Ibrahim visited Mitri after the blast, he gave the devastated homeowner a framed image of St. Vincent de Paul, the founder of the Vincentian order.

Mitri, 55, was alone when the explosion occurred.

The ceiling in the living room remained collapsed and open to the sky. Mitri said he is overseeing home repairs, while his family stays with relatives.

Mitri told the priest that, more than five weeks after the blast, he was sleeping on a mattress on the floor of an empty bedroom. At 2 a.m., he felt as though someone was telling him, "Get up." Although puzzled by the prompting, he nevertheless chose to go into the bathroom. He returned to find a large rock on the mattress, in the spot where his head would have been.

"That was Jesus, warning me," Mitri said.

Father Ibrahim handed the Bible to Mitri. They prayed together, under the open-air ceiling, framed by scaffolding.

"The support of Father Michel means the world to me. He visits me. He prays with me. This gives me strength," Mitri said.

Doreen Abi Raad - Catholic News Service
Provide feedback on this article
Join the conversation: Login or create an account
Before you can comment, you need to update your profile to include your first and last name, as required in our comments policy. Then reload this page and you'll be set up for commenting. Update your profile