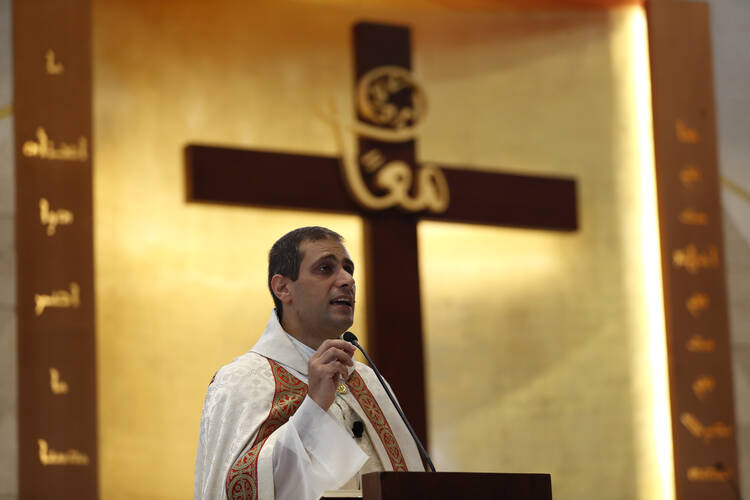 The video shows Father Rabih Thoumy swinging a chain censer sending smoke into the air when abruptly there is a rumble and then a loud bang as the shockwave from Beirut's devastating explosion slams into the church.

Thoumy darts for cover as stained glass and other debris fall from above. The camera tips over, coming to rest focused on a carpeting of glass shards covering the floor.

The world witnessed fleeting glimpses of the horror wrought on the Lebanese people on Tuesday through videos that circulated widely online, among them that dramatic footage as Thoumy celebrated Mass via livestream from Saint Maron-Baouchrieh church.

A live-streamed Mass in Beirut caught the moment the explosion went off. Unreal. pic.twitter.com/Vt4DeubVg6

“If we hadn’t run quickly ... we would have been more badly hurt,” Thoumy, who suffered minor injuries on his head from the glass, told The Associated Press. “God has saved us.”

“If we hadn’t run quickly...we would have been more badly hurt,” Father Thoumy, who suffered minor injuries on his head from the glass, told The AP. “God has saved us.”

The Tuesday evening mass — only about 10 people were present with the church closed to worshippers amid the coronavirus pandemic — had begun just minutes earlier when the church started shaking. Then it felt like it was swaying.

Church priest, Father Marwan Mouawad was chanting off-camera when the lights went out and the glass rattled and then came crashing down. A gust of dusty wind — “like a storm," he said — buffeted him as shards fell on his back. A nun was also injured in the head.

It was neither. The massive blast was apparently the ignition of 2,750 tons of ammonium nitrate, a chemical used for explosives and fertilizer, that had been stored at the Beirut port.

Church priest, Father Marwan Mouawad was chanting off-camera when the lights went out and the glass rattled and then came crashing down.

At least 160 people were killed and thousands injured with many more left homeless in a devastating blow to a city and country already reeling from severe economic turmoil and the coronavirus pandemic and related woes.

Inside the church, wooden pews that in normal times would have been full of worshippers were left littered and deeply scratched by the jagged glass.

“If there were (more) people," Mouawad said, "we would have definitely seen deaths.”

When he finally left the church, he found what he likened to a “ghost city” of blown-out buildings and damaged cars. Later he learned that many members of the church's congregation had been injured elsewhere.

Like other faith communities around the world, the church was already struggling due to the pandemic. It closed to worshippers before reopening with limited capacity, and then closing again as cases increased in the country. Donations and collection plate money have dried up as parishioners increasingly struggled to stay afloat themselves.

“If there was no faith, we wouldn’t have been able to remain steadfast despite all these crises. The people say ‘we rely on God and God will, for sure, not abandon us.’”

Now, it faces increased needs from congregation members, many asking for help with food, medicine or repairing homes damaged by the explosion.

While the church has yet to begin its own repairs due to financial constraints, it reopened Friday to worshippers with limits on numbers. Only a smattering of the faithful attended service that day. Some didn't know early enough that the church had reopened; others may have been scared, said Mouawad. There were tears and shock.

“They all said the same thing: ‘Thank God that He has saved you.’"

Even before the blast, Lebanon has struggled.

“We see our people dying. We see our people going hungry,” Mouawad said. “We try to do the work but we have very limited capabilities. ... We cannot replace the role of the state," which is not meeting the people's needs, he said.

But amid hardship he still sees God’s work, such as in the man who recently called offering to donate food for the needy just when the church had run out of supplies for its twice-a-week soup kitchen.

“If there was no faith, we wouldn’t have been able to remain steadfast despite all these crises,” he said. “The people say ‘we rely on God and God will, for sure, not abandon us.’”

Mariam Fam - Associated Press
Provide feedback on this article
Join the conversation: Login or create an account
Before you can comment, you need to update your profile to include your first and last name, as required in our comments policy. Then reload this page and you'll be set up for commenting. Update your profile