At Beirut parish, signs of hope, demands for accountability after blast

At Beirut parish, signs of hope, demands for accountability after blast 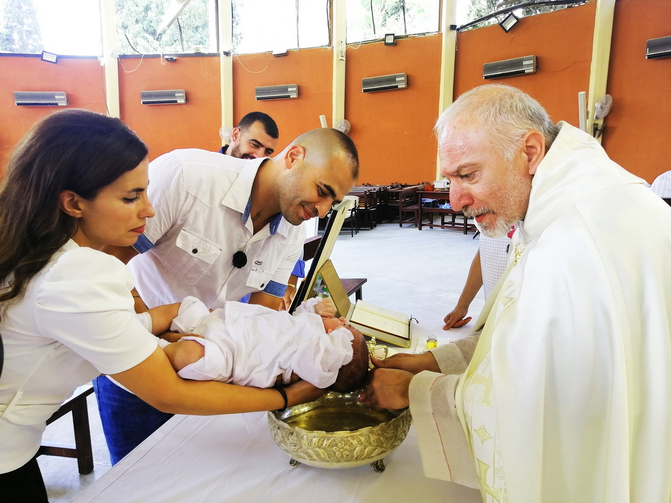 BEIRUT (CNS) — Sunlight streamed through the damaged rotunda roof of Mar Mikhael Maronite Catholic Church, damaged when a massive explosion in the port ripped through the city.

Baby Simon’s parents readied him for his baptism on the feast of the Assumption, Aug. 15.

“Life must continue,” Maria Nader, Simon’s mother, told Catholic News Service as she held her 2-month-old son. “We already had the baptism scheduled. We didn’t want to cancel it” after the Aug. 4 blast.

“Despite what happened, which is so devastating to everyone, I think the message is that we have to spread hope, that there is still hope for everyone,” Nader said. Following the Maronite tradition of a baptism name, the baby’s parents chose Charbel, after the beloved Lebanese saint.

The serenity of the first sacrament was punctuated by commotion outside: a chorus of beeping horns, motor scooters zipping by, jackhammers digging through rubble — as if the church were an open air arena.

That’s because the church’s stained-glass windows were completely blasted out during the massive double explosion. A sole window — a cross — remained intact, illuminated in brilliant colors as if a testimony to the promise of faith.

Also spared from the destruction of the blast were the crucifix and statues of the Sacred Heart of Jesus and Blessed Mother on either side of the altar, as well as the glistening St. Michael mosaic backdrop.

“This baptism is giving me a lot of joy and hope,” the priest said with a smile. “We have Simon. We have a new life. And we have someone who is ready to be a son of God. The sons of God can change the world. You have to help him so that he can cross into eternal life. And he will be one of these people in the future who will give a new face for Lebanon and for the whole world.”

Although he was not the celebrant for Mass the evening of the blast, Father Mouannes was sitting in a back pew. Only about 15 people were attending, due to COVID-19 restrictions.

The church clock is since frozen at the time of the devastation: 6:08 p.m.

Father Mouannes recounted how he crouched and held his ears at the sound of the first blast.

“When I realized I was still alive, the first thing, I thanked God,” he said. “Then I started to check on all those in the church. “Thanks be to God, everyone’s life was saved.” And because Mass had begun a little bit late, the priest celebrating was not in the spot where glass and a concrete block came crashing down around the altar.

However, the people sitting in the first pews were injured, one woman very seriously.

“She couldn’t move, because everything fell down around her. We lifted her, and then she suffered for two hours before she could get to the hospital,” Father Mouannes recalled of the chaos in the affected Beirut neighborhoods following the blast. The woman had several broken ribs.

“I called her and she is now much better and out of the hospital,” the priest said.

Although the lives of those attending that Mass were spared, so far 12 parishioners have died from the blast. Father Mouannes has no idea how many have been injured.

The parish is continuing its outreach to the community, providing more than 150 hot meals from the basement parish center.

“If we don’t change our hearts, nothing will change” in Lebanon, stresses Father Mouannes.

Fueled by the detonation of 2,750 tons of ammonium nitrate stored at the port, the disaster is also fueling the anger of the Lebanese, for whom this catastrophe illustrates once again the carelessness of a political class accused of corruption, incompetence and for causing the country’s economic crisis.

On Aug. 14, Maronite Bishop Paul Abdel Sater of Beirut concelebrated Mass in the street amid the destruction on a makeshift altar in front of Mar Mikhael Church for the intention of all the victims of the explosion. He was joined by the Vatican nuncio to Lebanon, Archbishop Joseph Spiteri, as well as Father Mouannes and several other priests. Surrounded by posters of four other Maronite churches damaged by the disaster, the altar was adorned with Mar Mikhael’s Blessed Mother statue.

Archbishop Sater pressed the political class in his homily: “Dear officials in my country, I want to know … Why did the explosion happen? How? And by whom? And will you be held accountable for the perpetrator?”

“Do you feel the people’s anger? Do you hear the cries of the bereaved mothers?” he asked.

Archbishop Spiteri told those present, “Today I assure you that His Holiness Pope Francis wept and continues to cry with you.”

“We demand justice and truth so that we can continue our civil and social path so that we rebuild Beirut, your city, and all the devastated regions,” he said.

Provide feedback on this article
Join the conversation: Login or create an account
Before you can comment, you need to update your profile to include your first and last name, as required in our comments policy. Then reload this page and you'll be set up for commenting. Update your profile
More: Middle East / Catholic Identity