Pope Francis: Defeat Covid-19 by working for the common good 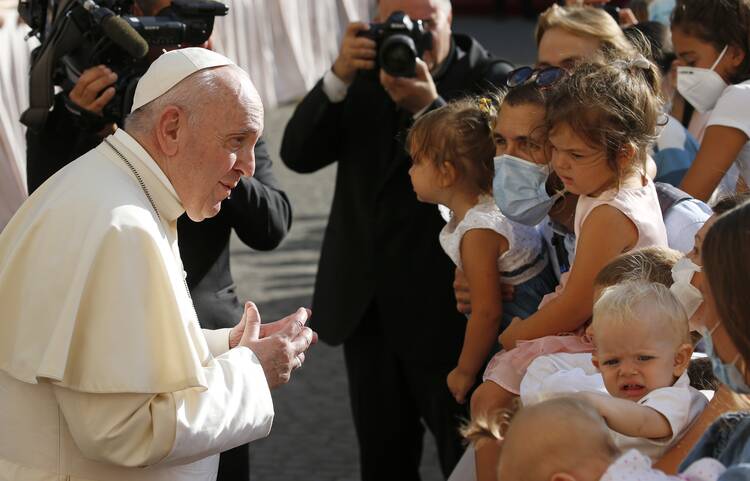 Pope Francis greets people as he arrives for his general audience in the San Damaso courtyard at the Vatican Sept. 9, 2020. (CNS photo/Paul Haring)

If society does not join together in seeking the common good during the pandemic, it will emerge worse off, Pope Francis said during his Sept. 9 general audience at the Vatican.

He focused his talk on “the common good,” a central theme in the Catholic Church’s social teaching. It was the latest talk in a series that he started on Aug. 5, based on the Gospel and the principles of the church’s social doctrine, aimed at helping the human family emerge from the coronavirus pandemic, heal social ills and build a better world for future generations.

At the same time, he warned against tendencies contrary to “the common good” that are emerging in various places. “Unfortunately, we see partisan interests emerging,” Francis said. “For example, some would like to appropriate possible solutions for themselves, as in the case of vaccines. Some are taking advantage of the situation to instigate divisions: by seeking economic or political advantages, generating or exacerbating conflicts.”

Some people, he said, care not for “the suffering of others; they pass by and go their own way,” as the story of the Good Samaritan tells us. He described them as “devotees of Pontius Pilate, who wash their hands of others’ sufferings” and take no responsibility for the common good.

The pope, who did not wear a mask at the audience but put one on immediately afterward as he got into the car that took him back to his residence at Santa Marta, began by asking the 500 pilgrims wearing masks to “respect the social distance,” in the Vatican’s Renaissance courtyard of St. Damasus—a pope from the fourth century.

He told them and the much larger global audience following on the livestream that “the Christian response to the pandemic and to the consequent socioeconomic crisis is based on love, above all, love of God who always precedes us” and “loves us unconditionally.”

He assured them “when we welcome this divine love, then we can respond similarly” and so, “I love not only those who love me—my family, my friends, my group—but also those who do not love me, who do not know me or who are strangers, and even those who make me suffer or whom I consider enemies.”

He admitted: “Certainly, to love everyone, including enemies, is difficult—I would say it is even an art! But an art that can be learned and improved.” This love, he said, “is not limited to the relationship between two or three people or to friends or to family. It comprises civil and political relationships, including a relationship with nature.”

He noted that often we consider “our adversarial politicians” as enemies and tend to view them as “disabled politicians, socially.” But, he said, “only God knows if they are truly thus or not. But we must love them, we must dialogue, we must build this civilization of love.”

Otherwise, we get “wars, divisions, envy, even wars in families.” He insisted that “inclusive love is social, it is familial, it is political.... Love pervades everything.”

Then, referring to the pandemic that has infected 27.7 million people in 213 countries and territories and caused the deaths of more than 902,000, Francis said, “The coronavirus is showing us that each person’s true good is a common good.”

He told his global audience: “A virus that does not recognize barriers, borders or cultural or political distinctions must be faced with a love without barriers, borders or distinctions.” Furthermore, he said, “this love can generate social structures that encourage us to share rather than to compete, that allows us to include the most vulnerable and not to cast them aside, that help us to express the best in our human nature and not the worst. In fact, when we love and generate creativity, trust and solidarity, it is then that concrete initiatives emerge for the common good. And this is valid at both the level of the smallest and largest communities, as well as at the international level.”

On the other hand, he warned, “if the solutions for the pandemic bear the imprint of egoism...we may perhaps emerge from the coronavirus crisis but certainly not from the human and social crisis that the virus has brought to light and accentuated [it]. Therefore, we must be careful not to build on sand! To build a healthy, inclusive, just and peaceful society we must do so on the rock of the common good.”

Pope Francis said, “The promotion of the common good is a duty of justice that falls on each citizen. And for Christians, it is also a mission.”

He noted that “unfortunately, politics does not often have a good reputation, and we know why.” But, lest he be misunderstood, he added, “this does not mean that all politicians are bad.” He said they can “show that good politics is possible” by putting “the human person and the common good at the center.” He said history shows that many did so and are saints.

Pope Francis concluded: “The common good requires everyone’s participation. If everyone contributes his or her part, and if no one is left out, we can regenerate good relationships on the communitarian, national and international level and even in harmony with the environment.” With God’s help, he said, “we can heal the world working all together for the common good.”