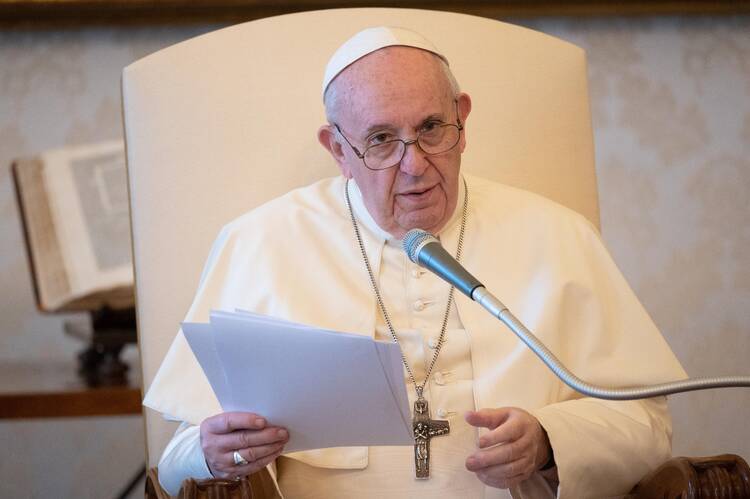 Pope Francis leads his general audience in the library of the Apostolic Palace at the Vatican Aug. 26, 2020. Christians cannot stand idly by and watch as milions of people are deprived of their basic needs because of greed, the pope said. (CNS photo/Vatican Media)

On Aug. 5, Pope Francis resumed his weekly audiences after a July recess with the announcement of a new catechesis series. The series focuses on healing the world from the physical and social ills related to the coronavirus pandemic. The Holy Father has used these audiences to express concerns about the economy, the environment, illness, death and sin, and he has encouraged Catholics around the world to respond with faith and hope to the challenges of the global pandemic.

Here we offer selections from the pope’s catechesis as well as links to his full remarks.

“Renewed contact with the Gospel of faith, of hope and of love invites us to assume a creative and renewed spirit. In this way, we will be able to transform the roots of our physical, spiritual and social infirmities and the destructive practices that separate us from each other, threatening the human family and our planet.”

The pope’s series, which began in Aug. 5, focuses on healing the world from the physical and social ills related to the coronavirus pandemic.

Pope Francis focuses on examples of Jesus bringing physical and spiritual healing in the Gospels, particularly the healing of the paralytic at Capernaum (Mk 2:1-12). He delineates the role of the church in physically confronting the pandemic: “Although the Church administers Christ’s healing grace through the Sacraments, and although she provides healthcare services in the remotest corners of the planet, she is not an expert in the prevention or the cure of the pandemic. She helps with the sick, but she is not an expert.”He calls upon experts and political leaders to engage with not only the physical but also the social ills of the pandemic.

“Within the Christian tradition, faith, hope and charity are much more than feelings or attitudes. They are virtues infused in us through the grace of the Holy Spirit (see CCC, 1812, 1813): gifts that heal us and that make us healers, gifts that open us to new horizons, even while we are navigating the difficult waters of our time.”

“The pandemic has highlighted how vulnerable and interconnected everyone is. If we do not take care of one another, starting with the least, with those who are most impacted, including creation, we cannot heal the world.”

He encourages believers to be attentive to those who suffer and to avoid “attitudes that run counter to harmony.”

Pope Francis reminds listeners that harmony is essential for protecting and uplifting life. He encourages believers to be attentive to those who suffer and to avoid “attitudes that run counter to harmony,” citing indifference and individualism. He discourages a throwaway culture in which people focus only on the things that immediately impact them and forget the essential interconnectedness of humanity. He implores people of faith to remember their particular responsibility to their neighbor in a time of suffering: “While we all work for a cure for a virus that strikes everyone without distinction, faith exhorts us to commit ourselves seriously and actively to combat indifference in the face of violations of human dignity.”

“Commendable is the effort of so many people who have been offering evidence of human and Christian love for neighbour, dedicating themselves to the sick even at the risk of their own health. They are heroes!”

“This renewed awareness of the dignity of every human being has serious social, economic and political implications. Looking at our brother and sister and the whole of creation as a gift received from the love of the Father inspires attentive behaviour, care and wonder. In this way the believer, contemplating his or her neighbour as a brother or sister, and not as a stranger, looks at him or her compassionately and empathetically, not contemptuously or with hostility.”

“[T]he virus, while it does not distinguish between people, has found, in its devastating path, great inequalities and discrimination. And it has exacerbated them!”

Pope Francis urges a dual response to the virus, calling not only for the eradication of the illness but also the social injustices it reveals and exacerbates. He stresses the importance of the preferential option for the poor to this response. He suggests that the virus will not end with a return to “normality” but with a world either better or worse off than before. He takes particular care to say that any normality of routine that we return to should not include social injustices and the degradation of the environment. He strongly and notably calls for the vaccine for Covid-19 to be available to all those in need, not simply to the richest or to those in a particular nation or region, when it becomes available.

“Faith, hope and love necessarily push us towards this preference for those most in need, [1] which goes beyond necessary assistance (cf. EG, 198). Indeed it implies walking together, letting ourselves be evangelised by them, who know the suffering Christ well, letting ourselves be “infected” by their experience of salvation, by their wisdom and by their creativity (see ibid). Sharing with the poor means mutual enrichment. And, if there are unhealthy social structures that prevent them from dreaming of the future, we must work together to heal them, to change them.”

Pope Francis leans on the idea of the universal destination of goods to call out injustices in the care for the economy and the environment. He denounces intense economic stratification and a throwaway culture that is devastating to the planet. He warns listeners not to transform property and money into ends but to instead take inspiration from the early Christian communities who weathered challenges by putting goods in common.

“In the face of the pandemic and its social consequences, many risk losing hope. In this time of uncertainty and anguish, I invite everyone to welcome the gift of hope that comes from Christ. It is He who helps us navigate the tumultuous waters of sickness, death and injustice, which do not have the last word over our final destination.”

“Property and money are instruments that can serve mission. However, we easily transform them into ends, whether individual or collective. And when this happens, essential human values are affected. The homo sapiens is deformed and becomes a species of homo œconomicus—in a detrimental sense—a species of man that is individualistic, calculating and domineering.”

“The current pandemic has highlighted our interdependence: we are all connected to each other, for better or for worse. Therefore, to emerge from this crisis better than before, we have to do so together; together, not alone. Together. Not alone, because it cannot be done. Either it is done together, or it is not done. We must do it together, all of us, in solidarity.”

Pope Francis suggests that the principle of solidarity is particularly important in this moment of coronavirus. Using biblical analogies to explain, he posits that Pentecost and the Tower of Babel are diametrically opposed. He characterizes Babel as what happens when we try to ascend while disregarding the importance of consideration for and connection with our fellow human beings. He compares this kind of mentality to that of some financial markets that appear to discard those experiencing poverty and hunger without a thought. In stark contrast, Pentecost represents the Holy Spirit’s ability to bring about harmony.

Additionally, the pope remembered the August tragedy in Beirut, calling upon the people of Lebanon to have hope and asking the clergy to accompany the faithful in their journey. He declared a universal day of prayer and fasting for Lebanon on Friday, September 4, and he announced that he would be sending a Vatican representative to the country.

“As a human family we have our common origin in God; we live in a common home, the garden-planet, the earth where God placed us; and we have a common destination in Christ. But when we forget all this, our interdependence becomes dependence of some on others — we lose this harmony of interdependence and solidarity — increasing inequality and marginalization; the social fabric is weakened and the environment deteriorates. The same way of acting.”

“The big wide world is none other than a global village, because everything is interconnected, but we do not always transform this interdependence into solidarity. There is a long journey between interdependence and solidarity. The selfishness — of individuals, nations and of groups with power — and ideological rigidities instead sustain ‘structures of sin.’”

“In the midst of crises, a solidarity guided by faith enables us to translate the love of God in our globalized culture, not by building towers or walls — and how many walls are being built today! — that divide, but then collapse, but by interweaving communities and sustaining processes of growth that are truly human and solid.”

[This will be updated as Pope Francis delivers more Catechesis. Stay updated by signing up for our newsletter.]